Took a day off on Fri and drove to see and work on my new biplane, it was delivered late Jan to my buddy’s shop and then we got shutdown.
I spent last week doing a top and other performance adjustments on my Frankenmotor and loaded and delivered it to the shop and got it on the airframe and plumbed the inverted oil and most of the fuel system. Cleaned up some items that I don’t want need for an acro machine. Still have controls and the gauge plumbing to do to complete fwf.
Still plenty to do after the fwf install.
As Patey says “Back to work!” 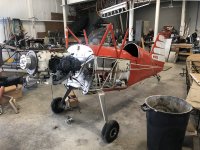 I spent a bunch of time trying to get my spinner centered better. It was badly off center when I bought the plane and it was trying to shake the plane apart. I took it off and have been flying without the spinner. I was waiting for parts to arrive this week so I reworked the bulkheads to center them up and remounted the spinner. I ended up with .065" of total runout measured about 3" back from the nose. It didn't vibrate but I could see the runout when I ran the engine. I tried to improve it today and I did somewhat. I ended up with .035" total runout. I was hoping for better results. It is a fiberglass spinner with uneven thickness and the rear bulkhead is flimsy. I probably need to stiffen the bulkhead up. I will see what it looks like when I run the engine but if it doesn't vibrate I will live with it for now. 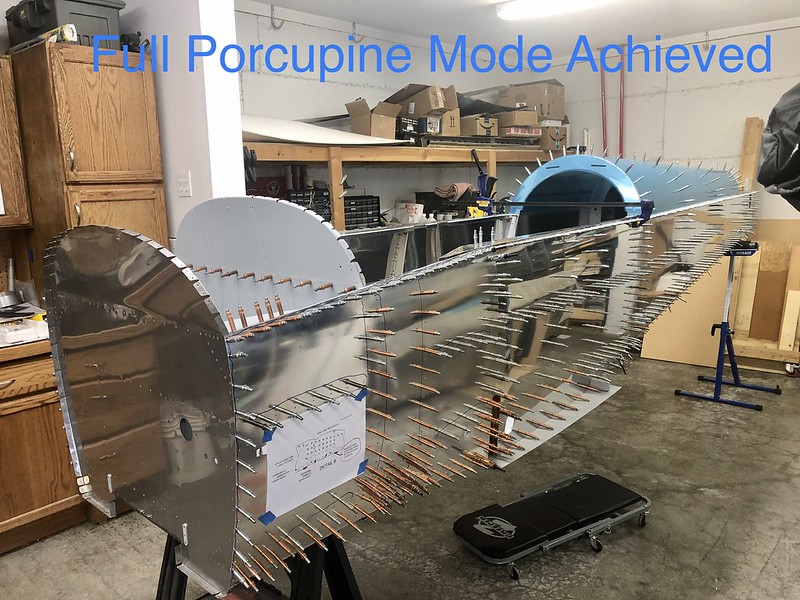 Finalized most of the stabilizer and elevator mounting, and installed the rudder.

Every time I turn around, I see something that the previous owner FUBAR'ed or Bozo'ed or just didn't think about. With the fuelage covered (poorly, mind you), there is no direct access to hook up the elevator horn to the elevator pushrod clevis. Although I have indeed flown "rudder-only" R/C models once upon a time, I decided that (at my advanced age and decrepitude) positive and reliable elevator control is a very well-deserved luxury.

There is a possibility that small, highly trained Rhesus Monkeys might be able to accomplish this, but not with my neanderthal hands. (Worse yet, the FAA has recently mandated that the Rhesus Monkeys have to hold an A&P license, and that they have to pass random drug screenings. The local monkeys refused to pee in the cup last month, because of that big scandal at the strip club with the tequila shots in the dancers' belly buttons.)

If the previous owner would have installed a round access cover ring there where you could see and work on the elevator hookup, then that would be reasonable. He even had the good taste to install one a foot away so you could access the tailwheel spring retainer bolt. But no such luck for the elevator control.

So the razor blade came out, and - like magic - my fingers and eyesight got in. I'll probably glue a piece of clear plastic there to be able to see it, but chances are I could cover back over it and never have to get in there again.

So I made the tangs... that mount onto the stabilizer strut bolts... that have the holes... that pass the thimbles... that protect the wire rope cables... that get tied together by the Nicopress sleeves... that make the vertical fin vertical.

Next trip to the airport, I'll have to find an innocent vict.... I mean assistant... because doing the Nicopress process with the cable on the aircraft requires three or four hands, and I don't think the monkeys are sober yet...
Last edited: Jun 22, 2020

Finally completed the fill/sand piece with micro...now on to epoxy wiping the surface in prep for primer and paint! Also cut out the nose landing gear bay door!

Cleaned up the shop today and made room to drag the welder out. Going to try and make some firewall passthroughs this week.

Ordered parts from Aircraft $pruce today. As usual, delivery is more than the two bolt-washer-nut stacks!
"The only people reliably making money on Home Built Airplanes are the shipping businesses." US Postal, in this case.

We ordered some mount bolts 2nd day air to have for the engine install and still didn't get them! Chris was not happy, "I just smiled, sitting there on that sack of seeds" from the Wild Wood Flower.

pwood66889 said:
"The only people reliably making money on Home Built Airplanes are the shipping businesses." US Postal, in this case.
Click to expand...

I try to include things in orders that I have not yet identified as needed, but likely will need, as long as it does not significantly change the shipping cost. There definitely is an opportunity to save cost on a major project by planning and managing material purchases. [Edit: That is theory - I have yet to prove it.]

You lot in the USA have nothing to complain about when it comes to shipping costs. Getting parts shipped to here in New Zealand the shipping is torture, I have had times where the shipping was close to 3x the price of the parts.

MadRocketScientist said:
You lot in the USA have nothing to complain about when it comes to shipping costs.
Click to expand...

I’m sure that you are right, but we like to complain.

Miss management of our assets doesn’t mean it shouldn’t have been profitable. People did not want it to be. A Peter Ueberroth type would have been able to complete with Amazon. The rest would get censored .

This immediately made me think of the bikini girl in the movie Dr. Strangelove, whose character was credited as "Miss Foreign Affairs".

Victor Bravo said:
"Miss Management" would be the nose art on some white collar criminal's P-51 that was bought with shady leveraging of hedge funds and securities
Click to expand...

Or, a character in a "tween" computer game.

Washed the Rocket and did a preflight.

MadRocketScientist said:
You lot in the USA have nothing to complain about when it comes to shipping costs. Getting parts shipped to here in New Zealand the shipping is torture, I have had times where the shipping was close to 3x the price of the parts.
Click to expand...

No joke! I dealt with the exact same thing when I was living in Germany.

Over the past couple days... tried firing up the welder to make some wiring passthroughs. I had very little welding experience anyway and haven't touched it in over a year... and let's just say it wasn't pretty. I'll maybe try again sometime soon, and watch some of Scrapper's videos in the meantime.

Also marked and drilled some more doublers and such for firewall-mounted equipment. Still have a couple relays that need to find homes.

Been working on panel layout and switch positions, and trying to get back into doing the electrical diagrams, too. I'd much rather be out in the shop more but it's easier to do this stuff with a four-year-old running around.

First flight in the books. No issues of concern. Cylinders are cooling almost TOO well again (just like last year). My hottest CHT was 360. Once the rings seat it will be even cooler! Might need to neck the inlets down even more - which is something considering they are already smaller than the RV-8.

Toobuilder said:
First flight in the books. No issues of concern. Cylinders are cooling almost TOO well again (just like last year). My hottest CHT was 360. Once the rings seat it will be even cooler! Might need to neck the inlets down even more - which is something considering they are already smaller than the RV-8.

Started my first rib glue up for my Pietenpol project on Wednsday. I'll need to stop by HF to pick up some more small A-clamps to finish gluing the opposite side gussets. I made a few modifications to the jig to lessen the chances of epoxy getting in between the capstrips and tooling (forward spar tool had to be removed with rib and coaxed out with an exacto knife and some light hammer taps). 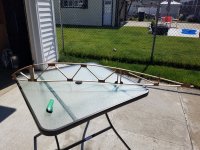 Also slowly banging away at disassembling one of the 2 Corvair core engines I picked up last month. One cylinder head has been removed, but I've hit a snag with a stuck headstud on the other face. The stud will have to be cut to get the head off, but at least I have 3 spare cylinder blocks to scavenge a replacement from if needed.
You must log in or register to reply here.
Share:
Facebook Twitter Reddit Pinterest Tumblr WhatsApp Email Link