Two brothers here at Corona airport have a pair of T18s and they never stop raving about them.Fly them constantly. I met a chap in Australia who flew his from Oz to England in the 1970s.

I had T-18 plans and decided that the metal work was more than I wanted to tackle, but it’s a great design especially if kept light and clean with a modest engine to keep the weight down.
P

PTAirco, was that Clive Canning you met? Did he tell you about the Syrian MiG's. The Thorp is also one of the few homebuilts to nearly get shot with a missle!

I'd like to see an original concept version. Here is the first article from Sport Aviation. Also a picture of the first one. And a later article of a folding wing version.

There have been many beautiful/elegant Thorps built. The intro photo shows an exceptional 'bird'.

Don Taylor [1918-to-2015] was a WWII FIGHTER PILOT, flying 75 combat missions in the CBI [25th and 80th FS]. His childhood was immersed in the adventure of the early aviation pioneers. He quietly pursued his dream of setting FAI/NAA like his heroes when he started building his 'T18' in late 1966... first flight of DT in ~1972. John Thorp was unsure about with dad's ambition... but when completed DT... he saw that dad was determined, with-or-without his help to do the flights. JT surprised-us by providing detailed structural and system modifications to allow ~150-gallons [total]of AV gas aboard... as safely and effectively as possible.

I watched 'them' taxi for take-off 'waddling'... tires bulged, wings visibly bowed-down heavy' [with fuel]. Takeoffs at MGTOW were really scary. I think he donated DT to the EAA museum in OSH ~1984, just short of 1000-hrs total flight-time... after North-Pole flight. Mom was relieved.

These photos you guys are adding makes this thread fun!

Which has better manners, a Thorp or a Mustang II?

I watched 'them' taxi for take-off 'waddling'... tires bulged, wings visibly bowed-down heavy' [with fuel]. Takeoffs at MGTOW were really scary. I think he donated DT to the EAA museum in OSH ~1984, just short of 1000-hrs total flight-time... after North-Pole flight. Mom was relieved.
Click to expand...

Yup...it's hanging on the wall, by the Loving's Love. 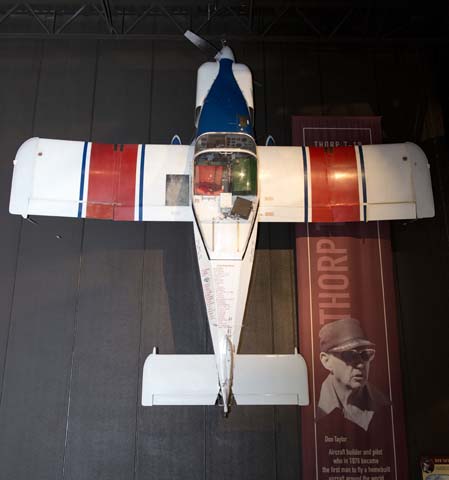 lol, I was there. I scoured that picture to see if I could find myself !

I knew Don pretty well and he was a fun guy to listen too when he was talking about his adventures. (He was also a very nice guy.)

One thing he said that stuck with me was when he thought it might be difficult to navigate across the ocean to Hawaii, but he soon discovered that at night, there were highly visible wakes hundreds of miles long that the freighters and cruise ships left behind them on the shipping lanes. It was like a big highway on the ocean surface.

Turd Ferguson said:
lol, I was there. I scoured that picture to see if I could find myself !
Click to expand...

I was also looking to find myself.

Me too. No luck, though.

plncraze said:
PTAirco, was that Clive Canning you met? Did he tell you about the Syrian MiG's. The Thorp is also one of the few homebuilts to nearly get shot with a missle!
Click to expand...

"Have you considered Hare Krishna?"

Ron "Not easy being green" Wanttaja 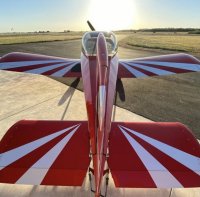 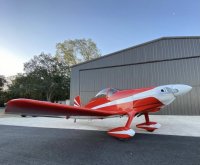 Thanks. I have done some high risk things but I'll take a pass on that.
One time I did have a low frequency flutter at about 205 mph when I wasn't paying attention to my airspeed in a clean airplane. I had single wraps on the turnbuckles and the aileron turnbuckle had turned enough to reduced the tension on the cable. Re-tensioned the cable and then did the double wrap on all turnbuckles and still do.
R

Little Scrapper said:
Which has better manners, a Thorp or a Mustang II?
Click to expand...

I've owned a flying T-18, a M-II project for a time, & flown several different M-IIs. (Have flown RV4s & -6 since around 1994.) They're obviously a bit different, but not as much difference as the variation than between two M-IIs, if at least one of them is scratch-built. Built correctly, neither is particularly difficult to fly, assuming you have decent prerequisite time in taildraggers. I had about 60 hrs in the Luscombe8A that taught me to fly when I bought the Thorp, and I thought it was a piece-a-cake to fly. (Of course, the Luscombe had bent gear that I didn't know about while training in it...) Neither is much more challenging than an RV; they just land a bit faster and the Thorp can sneak up on you in sink rate if you aren't paying attention. Not that different from an RV, just more of the same characteristics.

The original Thorp and the M-II are both a bit tighter in the cockpit than an RV6/7; one of the primary reasons I decided to build an RV7 after a storm ate the Thorp. If it hadn't been destroyed, I might still be flying it. A Thorp is 90% of an RV6 for 35-40% of the money. M-IIs can be 75% to 120%, depending on build quality and the owner's goals for the airplane. The M-II can have manners just as nice as an RV, or be really nasty in the stall if the leading edge wasn't formed correctly. It's a much thinner wing, and home-forming the leading edge properly without creasing it and getting a too-sharp bend was pretty difficult for some builders. I suspect that just about everyone buys them from the vendor, now that they're available.

I think I still have the matched-hole drill jig for the wings of the Thorp (just a strip of aluminum with holes in it) around here somewhere. Thorp really was a genius; You could 'snap together' a Thorp wing almost like a pre-punched RVx wing, without the megabuck CNC punch, and with pulled rivets instead of bucked.

The cranked wing was for aerodynamics, but easily achieved because of the 4' panel width.

There are several T-18 owners who, before the 390 cu in engines, would contest the “almost equal performance.”

The design is “cramped” because John used the WW-2 “model pilot dimensions” when sizing the airframe. The plans were industry standard, over 200 sheets. Many, lacking fabrication experience, found them daunting. The untold part of the story, is John went to the extra effort to produce “professional” plans to comply with FAA cert standards in case the flying public “lost” the “can we make homebuilts” argument with the FAA.

The S-18 wasn’t “sanctioned” by John, it was an effort by Lou Sunderland to make a wider fuselage - with a wing fold narrow enough to trailer on the road. John did help Lou with the design of the wing attach fittings and strongly differed with Lou’s failure to adhere to fluid dynamics when he widened the fuselage. I was a “fly on the wall” at dinner one night when the visiting Lou and John went at it “hammers and tongs” on several issues.

From experience, a properly constructed T-18, with good airfoil compliance, stalls better than a C-150. It may be “quicker” than most airplanes, but it’s very “honest” It’s only “hot” if you let your attention wander and fail to apply reasonable piloting skills. Elaine Ginn earned her private in her husband’s T-18.

Gary Green is the only pilot known to me to spin a S-18. During the test flight, he went much higher than originally planned and IIRC, pulled it out something like 300' AGL (Whew!).

The original design contemplated “pop rivets” but they didn’t do so well in service and a properly flush riveted T-18 was about 15MPH faster with the flush rivets. Chris, as I revealed in another thread, I knew Ken Rand personally. From discussions with John, it’s better to exit the cooling higher above the wing than seen with the T-18.

John was never “wishy washy” on the T-18. He anticipated installation of an O-360 from the get-go. He didn’t anticipate the cockpit turbulence and, with the increasing interest in the design, it was worth while to design and include the “upgrades.” Bill Warwick was a very talented technician and assisted greatly in the development. Vaughn Parker, a supervisor at a Lockheed prototype shop (IIRC, the “Vega” division) was a key figure in developing the tooling.

Properly constructed, by a competent fabricator, there is no reason for substituting -3's for -4's except if you wish to increase the workload.

I'm being called for dinner, but I expect this thread to continue and will add my appropriate comments as the thread develops.

There's a long article on Thorp history by Dick Cavin (I remember his name from my newsletters back in the 1990s) in Thorp newsletter #136, downloadable here.

On the small world front, the 1st article in that newsletter is by Bob Highley talking about work he did after installing his new engine; I had just bought his old one that was timed out with ~2050 hours on it but still running great. Never made it into my RV7 project, though. I really wanted a rotary, so I traded the engine to my neighbor for a really good used car. The crank from that engine just went into another neighbor's restoration of a Christen Eagle.
You must log in or register to reply here.
Share:
Facebook Twitter Reddit Pinterest Tumblr WhatsApp Email Share Link