I think we've clearly established that this design won't accelerate at 3Gs now... I'm looking forward to seeing it fly with any powerplant.

I hope it's successful. Will be nice to see a new canard kit with minimal build time come to market.

I don't get the canard fetish though. It seems as mythical as a flying wing - promising much and delivering disappointing compromises in reality.

Every configuration is a compromise. Clearly I don't see the canard compromises as disappointing at all!
E

I'm kinda new to this forum and I do not like to through my 2 cents worth anywhere, that being said I think people must stop trying to judge design of planes, my dad built a plane from scratch (cloth and pipe ultralight) was butt ugly but out flew everything that came close.
Everybody laughed and judged just to be slammed in the face. Give these guys a chance and eat the pudding then judge. Respect to anybody that start and finish such a project, fail or win, THEY TRIED. Stop being a armchair builder and do something useful for the community. Take flight forward.

PS. I think this is a real sexy little plane, looking forward to it being in the air.

Andy_RR said:
I don't get the canard fetish though. It seems as mythical as a flying wing - promising much and delivering disappointing compromises in reality.
Click to expand...

The larger issues are two-fold: Over-hyping from the canard community (much less now, but especially back in the '70's and '80's), and lots of failed examples that were designed and built by people who had no business (meaning, actual knowledge) designing something as difficult as a canard aircraft. In this way, you're quite correct: the same two issues have bedeviled the flying-wing community for even longer than they have canards.

Also much like flying wings, canard configurations are extremely good at exposing incompetency and lack of knowledge on the part of the designer. If you don't really know what you're doing, don't try. The odds of failure are extremely high, and you'll just end up contributing to the mythology that the design type is "worthless" or "dangerous." By the same token, doing one successfully and then suggesting that the feature is a panacea for all potential missions (or even all particular missions in that particular subset) is probably just as much to blame for the errant reputations that both types have developed.

Do a canard or a flying wing because it makes sense for the mission goals at hand, not just because someone said, "it's better." 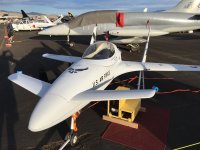 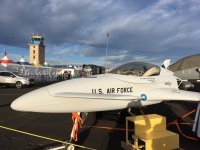 Hot Wings said:
And this is now how a Kg is now defined - with a Kibble balance. No more need for a chunk of metal to be kept in isolation.

And to keep this HBA related - the Homebuilt version for getting very accurate mass measurements of our parts:

If "Weight is the enemy" then it doesn't matter how much mass we use to build our planes, we just need to fly higher.
Click to expand...

As I had pointed out earlier, you measure its weight with the Kibble Balance, then divide by local gravitational acceleration to finish getting mass.

As to weight being the enemy, it is. Weight times change in height is the energy stored in climb that must come from the engine, weight times the rate of climb is the climb power in excess of power required for level flight at climb speed, weight ties g's must be carried by lift at the price of induced drag to fly at all, and weight times g's is the major loads on the airframe for flight and landings. The one condition where mass all by itself is acceleration in the direction of flight, but multiply mass times the acceleration to get the thrust required in excess of the steady state thrust.

And since we can not usually measure mass, but instead measure weights, then weight really is the enemy we can measure.

Now if you have gadget that really measures the mass of your airplane parts, then by all means, do mass control in your design and build. The result is the same....

I got to meet and talk to Jeff for a bit at Reno. Cool design and nice, no nonsense guy. Best of luck with this project Jeff.

Anyone who could provide a way to get building plans for Thompson Boxmoth?
Patent US 3930624, 1976 It's rather a Tandem than a Canard, but flight was reported very stable. Thanks.
Salut +
B

I was following along on the prototype build on revelaero. They were putting updates on Facebook under x project almost daily and now it has been over a month since the last update. Also the website is no longer revelaero.com? Anyone know what happened?

According to this website, the Thompson Boxmoth is this one:

So which one is it?
V

No idea Bill....but it sure got REAL quiet, real quick, didn't it?
I bet it wasn't the Christmas break!
Did you see Beaudry's website?
https://voodoo-jet.com/
B

Venom said:
No idea Bill....but it sure got REAL quiet, real quick, didn't it?
I bet it wasn't the Christmas break!
Did you see Beaudry's website?
https://voodoo-jet.com/
Click to expand...

It sure did get quiet! Never seen that website either; hoping the project is still moving forward.

Andy_RR said:
He is the guy engineering the thing! He needs someone else to work through all his assumptions and calculations before they spend any more time and effort on the project
Click to expand...

No ,John is not engineering the aircraft. He simply attempted some performance calcs which I did not take part in ,nor see before being published on old website,which his daughter created. This aircraft is my design( 20 + yr old design) and engineering is being performed by Mark Bettosini ( engineered the Viper Jet,my Orion and RA2,amongst other successful programs). Test program to be performed by Len Fox when ready. I apologize for the mistakes published,that bothers me as well as it compromises the credibility of my project and efforts. I value having a credible and successful background in design and development of new experimental kitplane programs, despite sometimes being involved with less than capable designers and partners. But always try to push through attempting to impart or encourage good decision making borne from experience. Sadly some dont listen. The Voodoo program will be viable ,having been validated to a large degree through a larger derivative design of the Voodoo. A few pictures of my Orion/Phoenix are attached herein.

Aerowerx said:
According to this website, the Thompson Boxmoth is this one:

I'd say it's another variant of basic arrangement, from same designer, the source of image in Xmas card is from YouTube, the one above is from a magazine of the time of BoxMoth presentation. Blessings +
B

I'm kinda new to this forum and I do not like to through my 2 cents worth anywhere, that being said I think people must stop trying to judge design of planes, my dad built a plane from scratch (cloth and pipe ultralight) was butt ugly but out flew everything that came close.
Everybody laughed and judged just to be slammed in the face. Give these guys a chance and eat the pudding then judge. Respect to anybody that start and finish such a project, fail or win, THEY TRIED. Stop being a armchair builder and do something useful for the community. Take flight forward.

PS. I think this is a real sexy little plane, looking forward to it being in the air.
Click to expand...

UAVGuy said:
You built and flew the 1/4 scale model for Peter ?

I have a question about the final weight. There seemed to be a lot of CAD and design done and yet the final weight was way higher than anticipated. How did that happen ? Were the composite pieced heavier than planned ? Were allowances not made for component weights ? Were pieces weighed as they were made and compared to the design or was everything weighed at the end and the total was found to be a surprise ?

I'm trying to learn vicariously and don't wish to repeat his experience.

I have another question... what tools were used to select the appropriate composite thickness and layers ?
Click to expand...

The Raptor suffers from excess in many respects. Powerplant pkg weight approached 1000 lbs, the excessively large fuselage and desire for it to be pressurized brought on a lot of extra composite weight due to cross sectional geometry not favorable for a pressure vessel. The large doors and linkages collectively approached 200 lbs. Flying surface laminate schedules and part weights were in line with similar aircraft, lancer IV, Velocity,my Orion for example. But fuselage was shall we say ,beefy. There was also a largely excessive parts count with resultant extra bond flange area,structural adhesive, where combining numerous smaller carbon parts into one larger complete part could have saved weight. Structural layout had already been cast in stone by Peter and Mark Bettosini had to run with it and insure it was structurally sound. He was not able to reconfigure much in order to pare down part count and weight.
My Orion/ Phoenix design pictured her. Larger than both Raptor and Velocity XL( which I performed styling redesign for) had a cabin large enough for six seats and powered by twin turbo IO 550 Continental,4 bladed MT prop. Designed by myself ,structural layout by myself, FEA and laminate schedule engineering by Mark Bettosini ( who performed same for Raptor) had an empty weight of 2250 lbs. So it is safe to say we are not to blame for the obesity suffered in the prototype Raptor. It can be remedied but it will take an open and receptive outlook and a realization that some things just dont belong in an aircraft and you design to minimums , not excess, to efficiently perform a mission.

That looks impressive. Definitely not obese. I like those tail fins. Maybe they could extend down? To serve also as a prop protector skid.