The first time I came around here asking about help with the design of a pie-in-the-sky electric canard for a bachelors final project. We were able to laminate a partial canard spar and do a bunch of hotwire cutting after spending a year piddling around doing analysis. some write ups are here. We ended up graduating and I have spent the last number of years as a mechanical engineer.

This time around I will attempt to design and build myself a capable ultralight made of modern materials. I am leaning towards a high wing tractor, similair to the Merlin PSA but designed specifically to be an ultralight, not an LSA-flex. Hoping to build most of my parts from simplified "soft" molds with vacuum infusion, a technique that a few impressive builds on this forum have utilized.

One of the first steps for me in this project was looking at the various engines that are available and/or almost released. I have tabulated those that I could find with an all up mass less than ~100 lbs. Lots are missing and I hope to add to the list in the future but I will go with one of the larger polini as a design basis for now.

All numbers are approximate

Looking forward to sharing all of the other info I gather along the way. Next up, the first cycle of conceptual design with a lil CAD thrown in!

You might want to start wrapping your head around the idea that no matter what your primary structure is (metal, composite, wood)... the outer surface of your wings and horizontal tail are 99.99% likely to be "airplane style" Dacron fabric covered if you actually want to have a Part 103 legal airplane.

It is of course theoretically possible to make an all-composite airplane with composite skins... and have it sneak in under Part 103 weight.

But it is not likely. It will be very expensive. A soda can dropped on it has a fair chance of damaging it. It will the the opposite of "robust", and it will not be usable as an off-airport STOL airplane.
T

Random, be sure to check out the “Ultralight Airplane Workshop “ videos on YouTube
R

@Victor Bravo yeah i think the rear part of the surfaces will likely be fabric. Interesting comparison between the strength of a very thin carbon skin vs a fabric one in terms of hanger rash though. I think 2 or 3 ply laminate skin would be at least as strong as the fabric in those types of cases so I won't discount it for that at least. but agree overall it would be a bit heavier.

@TLAR will do, thanks for the tips!

The most difficult problem with ultralights is that the very very very first time the designer says "yeah, it's a tiny little bit heavier... but..." could be the moment when the battle is lost forever.

nerobro ! Nice to see your name again ! Whatcha been up to?

Anything made to fit 103 is almost by default a STOL aircraft, purely through the speeds (or lack thereof) involved, just add more power for the short take off part.
R

TLDR: I have decided to use the Riblett 30A318 with junkers flaperons for my ultralight.

So I have spent some time reading through all the resources I could find on ultralight airfoil history, with such episodes as wing rib profiles being identified by the size of tire they were bent around (kolb) and the ole round in the front pointy in the back (RIFPIB) adage. While in all likelihood that is what will come out of my molds, I want to set my sights a bit higher. At least initially...

I went looking for all of those profiles that would build a good slow speed, low weight wing. This means ~18% thickness, simple shapes that would work with a composite D tube and maybe fabric skins. Nice big nose radius, low moment (Cm). I think I have also settled on junkers style flaperons much like the belite to keep my wings small but effective at slow speed. This complicates the analysis and I will lean on a justification from NACA and some real world examples for an effective max CL combined between the two surfaces. Currently looking at a 4 foot chord for 27.5 feet, 12 in chord flaperons. 515 pound gross weight.

I don't know exactly what the VLM used by XFLR5 thinks about the interaction of two lifting surfaces as close together as they currently are for my flaperons/wings, but I know it will capture even less of those effects at substantial angles of attack.

Just as with my gathering of a number of ultralight powerplants in my first post, I have gone on a quest through the forums and literature to gather any mention of some proposed airfoil for lower Re number ultralight applications. Based on the aforementioned geometry and part 103 requirements these are my relevant Re numbers. I also had my target Cl number that I was trying to hit.

To help me choose between them I made some predictions in XFLR5(XFOIL), and based on my past experience comparing its results to CFD and windtunnel data the program over predicts lift and under predicts drag. I usually knockdown my lift by 10% and bump up drag by 45%

Accuracy also breaks down after more than a handful of degree of +/- alpha. So no real stall predictions, but I still used max Cl as a relative metric in my down selection.

Here is the list that I compiled. I cast a wide net for these coveted .dat files, if the airfoil was thick n lightly cambered I was interested. I think my least favorite source was transcribing data out of riblett's book, what a lovely evening that was. hah

The second column shows my half arse reasoning for not selecting the airfoil for my ultralight.

The XFLR5 project file with all of the airfoil data is attached, please enjoy and follow along at home.

https://drive.google.com/file/d/1yq9z--wQAFk5bh5mdNpLtnL-IfenuSH3/view?usp=sharing
Would be nice if we could just upload these file types to HBA, I think that is really holding back the sharing of knowledge once you consider all the strange files engineers have to work with.

Overlap of the most promising sections before the last few rounds of downselect.

Their polars at my design point with a Re of 2.5 million for the main wing chord

It seems there is a bit of controversy about some of ribletts ideas, but when I was comparing his 30A418 to the nearly identical CLARK YM18 in the final round, his was showing a tad lower Cm. Most likely in the fuzz of the analysis accuracy but good enough for me to declare a winner and end my time wasting. As for the tail I will probably go with a NACA0015 to keep them nice and stiff, not too worried about a little extra drag from the section thickness.

Alright off to loft my first OML and work out the details of my flying surfaces.
Last edited: Mar 12, 2021

80 years or so in, and the Clark Y or derivative is still a top choice for slow light aircraft. Just shows ol' Clark was a smart guy... and without computers or spreadsheets.
R

Was going to ask if he lays claim to the thicker clarky foils, but increasing an airfoils thickness is a trivial task so he must have given some thicker sections a quick study as well. the original 11ish % thickness just isnt enough for a very light plane without a wing strut
T

I am going to follow along, if you post enough info, I will build one as well!
M

random_people said:
...... One of the first steps for me in this project was looking at the various engines that are available and/or almost released. I have tabulated those that I could find with an all up mass less than ~100 lbs. ....
Click to expand...

I believe he is going to have US distribution soon, and will sell lots of engines
R

@TLAR i will be sharing all source files, spreadsheets, CAD, finite element models etc along the way so feel free. Lots of great resources on this site but i find that no one really backs anything up with shared files which is a bit disappointing.

@Martin R. I like the idea of hybrid power with minimal batteries, will be interesting to see how that develops. Right now I've only got about ~54lbs dedicated to an engine (polini) but if the package you linked comes in near that maybe I can consider it.
T

Pretty unusual for a person to share in today’s day and time.
So nice of you. I suspect that I will not be the only one that will be interested in your design. The poloni is the solid choice.
L

Had some requests to share the airfoil data for those that I took a look at. Here is a zip with all .dats in Selig Format that is XFLR5 compatible. Also great for importing as a coordinate driven curve in the CAD program of your choosing. Very simple to do in solidworks for instance. This gives you the most accurate representation of the airfoil for outer mold line design.

Will hopefully have the CAD in a place to share soon, working with an overlay of the Merlin PSA to get everything sized up in the cabin and firewall forward.

random_people said:
...... Had some requests to share the airfoil data for those that I took a look at. Here is a zip with all .dats in Selig Format that is XFLR5 compatible. ......
Click to expand...

Thank you for the airfoil data.

Using the Vortex-Lattice-method software "FLZ_Vortex" from Frank Ranis, I tried to evaluate some properties of the data that we found in your previous postings.

As you use the expression "STOL" in the title of your thread, I'm particularly interested in the characteristics of Harry Ribletts 18% airfoil 30A418 and in the effect(s) of your Junker-flaps.

Here are the first results, but they don’t really convince me :-( 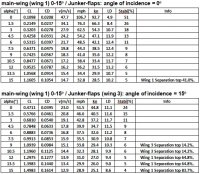 Question 1: I noticed, that you use XFLR5(XFOIL) for your calculations. What are the results of that program for the same alpha-angles and Junker-flap incidence values?