I’ve eliminated many engines but haven’t explored this one. The 2200’s are available used pretty reasonable.

There’s some issues with this engine from what I’ve read but some people really love them. Any one fly behind one? Anybody know anything about this model that could help me decide if this is a good option or not?

I think they may have fixed some of the major issues, but you have to make sure you are getting one produced after the fixes.

What is your engine budget?
M

There's a couple guys over on Avidfoxflyers.com that fly behind them, namely 1avidflyer aka Jim chuck and Tjay. They both love them as far as I can tell. I think they're both members here as well but don't log on very often here. They can tell you which serial numbers are OK to use.

It's lighter than a VW.
M

Which is beside the point for a Baby Ace. The point is the ability to swing a large prop.

I should have looked at the numbers closer so I’d know it was similar to a VW. I didn’t, I apologize for not looking closer.

I don’t have a budget I’m just trying to do something fun and different and hopefully kinda reasonable. There’s quite a few engine companies and options but it sounds like many are irrelevant to my situation.

I really want to do something interesting and make it kinda special but that’s not working out so well it seems. Haha.

What is your weight range and HP needed? This may help narrow down some choices for you. Is weight the ultimate reason you excluded the Corvair?

Chris Matheny said:
What is your weight range and HP needed? This may help narrow down some choices for you. Is weight the ultimate reason you excluded the Corvair?
Click to expand...

They start to get pretty heavy and obviously light airplanes are just better airplanes overall. I’m not against anything I’ll even go with a 2 stroke. I want light and powerful.......as we all know a difficult combination.

I just remembered I am using Sensenich 60x44 on my 2180 VW. The prop was originally installed on a Jabiru 2200 on a CGS Hawk 2. I think it was probably over pitched for the Hawk. My VW pulls it just fine.

Marc W said:
I just remembered I am using Sensenich 60x44 on my 2180 VW. The prop was originally installed on a Jabiru 2200 on a CGS Hawk 2. I think it was probably over pitched for the Hawk. My VW pulls it just fine.
Click to expand...

I would LOVE to build a VW for it. It just seems like that isn’t doable based on comments. I’m not a engineer but It seems like if it can power a 2 person Cygnet I should power a Baby Ace.
M

To compare the little A-65 prop wise, it’s turning 72x42 at less RPM. Horsepower is the comparison factor. Equal Hp for government work on these two. How they implement the horsepower is completely different.

A VW or one of these Jabiru would get a Baby Ace off the ground. But performance is going to be like an anchor thrown out.

Parasol planes have lots of drag. The Cub started as a parasol, E-2. Enclose all the sides and you get the J-2 which gets improved into the J-3. You don’t consider a Cub streamlined, but from its roots, it is. A Cygnet is way more streamlined. Wing is at the top of the fuselage and looks like a high wing but if you flipped it over it would be a low wing, so you really have low wing style drag. Smooth cockpit. If you can’t get more power , you have to have better aerodynamics.

In the other thread, the Cygnet guy said he ran at 20 inches of power. That’s his max power for his engine. On a dyno, they run to max manifold pressure to measure horsepower. That’s going to be, with losses, 25-26 in ; 29 in at sea level would be the theoretical top. The VW is run at less power to survive. It will overheat if it was loaded to 25 in. The Continental happy as a clam at 25 in. In fact it’s expected.

A Baby Ace is a hot rod Cub. Stick a Cub engine in a slightly smaller airframe and dump the passenger. It’s actually what the Fly Baby is. The formula is pretty common. Yank an engine out of a Mooney and stick it in your RV7.

Just a comparison percent wise. The difference in engine size between a big VW and an A-65 is the same as a Lycoming O-290 to a O-360. No one going to all the trouble to build an RV with less power.

What you get with a Baby Ace is the barnstorming charm. Open all around, wind in the face, good performance, nostalgic. I waffle constantly about building a Acey Ducey, so I’m a fan. As a fan I hate for something to get short shifted.

When Dave Thatcher first showed his CX4 at Lakeland, I really liked the airplane, and spent an hour or more talking to Dave about it and reviewing the plans.

One question I had was, "Could it be powered by the four cylinder Jabiru?" His answer was, "No. The Jabiru is so much lighter than the VW that it would have to be shifted so far forward that it would ruin the aesthetics."

I know it is lighter but it doesn't turn a bigger prop.

The Baby Ace built with a C-85-12F (with starter and alti) will be very light on its tail wheel and easy to put on its nose with braking. IF you are going to install anything heaver firewall forward, I would move the wheel axles forward.

One of the little Geo Metro engines with the Raven redrive might be a good combination. You would have to buy the redrive used because I don't think he makes them any more. But I recall they had a neat little 60-70HP engine that looked like a miniature Gipsy, or a Walter LOM. One of them even used the car turbo, and made a few more HP. The redrive would allow you to spin a viable propeller and get the performance you want. The inline engine would allow you to create a really neat classic looking British cowling with the little exhausts sticking out the bottom... so you would have something a little funky an unique. Very low fuel consumption, and built on an automotive engine platform that is reliable and parts are available. See if you can find info about the Geo/Raven engines, I can't remember which one was the 60-70 HP inline.
Last edited: Jul 26, 2020

I was under the impression it isn’t complete yet?

Nice fuel injected Suzuki, psru, make the front like a Fokker D7 or a Gipsy (insert various inline engine thoughts), and would be unique. Have powered Piets so it would haul a Baby Ace well. 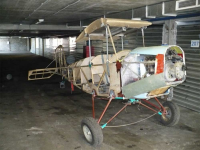