Hi,
I've been quiet on this forum for some time, but now that production of the FleaBike has begun, it's probably time to start a thread, and post some photos.

Originally inspired by Fritz' "Ranger" concept, I decided to put mouse to computer screen and produce my own sit-on Flying Flea. This involved buying a cnc Router. My first choice was the "Lowrider2", a full-sheet machine. However, after a few disasters, and ongoing issues, I decided to cut my losses, and invest in an OpenBuilds WorkBee cnc Router. What a great decision that was. Not the cheapest solution around, but not exactly expensive, either. The taxman was kind to me this year, so I blew nearly all of it on the new machine. A couple of weeks of assembly, plenty of mistakes and oversights, some stupid errors, and finally, a working cnc Router.

I had spent protracted months designing the plane. The idea was to cut the entire fuselage out of 19mm Hoop Pine plywood - in this country, Hoop Pine plywood adheres to the AU/NZ standards which are the highest in the world. A single sheet of the stuff costs a cool $350. But it is beautiful.

The design philosophy is as follows:
(1) Cut a 1.5mm plywood template for the entire side of the fuselage. Once cut, this weighs a ridiculously small amount.
(2) Cut individual pieces of the fuselage, with the main grain running parallel to the main stress vectors out of 19mm Hoop Pine ply
(3) Using the template as (can you believe) a template, align the fuselage pieces to this template and ensure that everything fits.
(4) Bond the individual pieces to each other and to the underlying template.
(5) To the outside of this frame, bond a 3mm ply sheet.
(6) Side 1 done

The pieces being cut on the router... 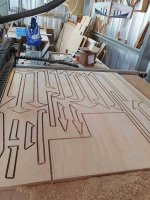 Thats so awesome and clever and simple and... nice work! I can't wait to see the rest.
Which workbee did you build? I've been looking at a cnc that can at least cut half of a standard plywood cheet (124cm wide) and the lowrider and openbuilds were on my short list. One costing twice as much as the other

This joint needs some attention as there is very little fuselage bending strength across this area. Its a pin joint and is the weakest link in your design.

Would be great to see the whole design, the use of thick ply for the longerons and diagonals seems to be pretty wasteful and not as structurally efficient as say using hoop pine strips.
A very interesting design, look forward to seeing the progress.

Duncan, glad to see you back ! The idea looks great.

Are you copying the aerodynamic model from a previously existing Flea and putting it on to a sit-on fuselage, or are your aerodynamic components and dimensions new?

You have full triangulation forward of the front seat edge, full behind the seat back, and the four struts nearest the seat bottom see all the leverage.

This will snap the vertical struts at the forward seat edge and, in addtion, likely destroy the area lelievre circled.

Raising the seat relative to the lower longeron would help - though not cure the situation.

And you need another triangulated strut from the front seat edge sloping forward and downward to the lower longeron.

Finally, the trapezoid under the seat is not a truss - which is part of why the area is weak.

My statements may seem harsh. Please accept my apology. I have your best interest at heart.

Hi,
Sorry, I didn't realise there were some replies to my post. I also realised that I posted an earlier iteration of the fuselage. I will post an update of the diagonals in the airframe when I get home this evening. The final structure addresses the structural weakness quite elegantly i think.

Plywood vs spruce:
You might be surprised at the weight and strength difference. There's almost nothing in it. And by using ply, I can build in the reinforcing gussets as part of the individual pieces. As far as ease of construction is concerned, plywood beats spruce + gussets by quite a large margin.

Design:
I started with the HM293, married it to the Ranger, and it evolved from there

Hi,
As promised, here is the final version of the airframe. As you can see, all nicely triangulated, and the vulnerable seat base area now much improved.

I managed to break one of the flex couplings on the router last week (those Nema23's are powerful beasts) - and the replacement arrived yesterday. So I spent the afternoon re-leveling the spoilboard (the first cuts showed that it wasn't quite level). Today I'm tackling the second sheet of parts. Tomorrow: all parts will be cut, and construction can begin! Lots of build photos to follow.

A question for the higher educated and smarter-than-me folks: The front end of the "seat" appears to be able to push or pull the middle of the upright into a curve, if vertical bowing/bending/flexing occurs in the fuselage. Am I not seeing something correctly? Will the skins take all those loads?

Correct, Victor, it will stress the upright. Adding another strut there improves the structure.

A better question: How can the loads best be routed?

The fundamental truss concept puts members into tension and compression, avoiding side loading.

The long single-piece member above the pilot is also a weak point. When stressed it can rupture near the forward part of the curve.

Victor Bravo said:
The front end of the "seat" appears to be able to push or pull the middle of the upright into a curve, if vertical bowing/bending/flexing occurs in the fuselage.
Click to expand...

Great catch, VB. I've added a triangulated piece. I can squeeze the extra part into the second half sheet of ply. Thank you.

nickec said:
The long single-piece member above the pilot is also a weak point. When stressed it can rupture near the forward part of the curve.
Click to expand...

Hi,
That piece is simply to hold the windshield in place. I was just going to terminate it above eye level where the windshield ends, but thought I might as well continue it to the turtledeck to provide a mount for a bit of a roof. The sun is something fierce here in Queensland.

You're more than welcome, but please make sure someone a lot more highly educated than me looks at this and agrees or disagrees. They may tell you that you need to run that new stick of wood up and forward to the top of the firewall instead of down... I truly cannot calculate any of those loads with the "free body diagram" voodoo that it requires.
W

lelievre12 said:
This joint needs some attention as there is very little fuselage bending strength across this area. Its a pin joint and is the weakest link in your design.

Very nice design Duncan, you are gonna have a winner there!
Last edited: Nov 4, 2020

Thank you. For me, the best thing is that the entire fuselage can be cut in about 4 hours, and glued together over the next day or two. I can't think of an easier or quicker build. I can't wait to see it take shape.

How long is the fuselage from FW to rudder element ?

Still bad... the entire bending loads come down to the height between the back of the seat and the lower longeron, you need a straight member joining the upper longerons past the cockpit.

And plywood is NOT suitable; it's good for shear loads, I.e. bulkheads and gussets but not for tension and compression the way you're using it.
S

I would add one here :