cheapracer said:
No he doesn't, and the "whys" has been convered more than enough over the last 4.5 years and some 5000 posts.
Click to expand...

Because he made decisions that the "experts" here didn't agree with ? Because he disobeyed some of the "rules" ? I don't agree with a lot of what Peter has done. But that doesn't mean I'm right and he is wrong. This story isn't done yet.

There are no points for being a critic. Anyone can be a critic.

UAVGuy said:
He might not have built the perfect plane or even a good plane, but he did not quit and he followed it through to the end.
Click to expand...

I disagree; this project has not yet reached the end.

UAVGuy said:
This story isn't done yet.
Click to expand...

I agree. There are several potential resolutions, none of which is likely to produce a kitplane that will come anywhere near the cost and performance claims.

UAVGuy said:
I'm not saying that I agree with everything Peter does, but let's give him a heap of praise for not quitting and not giving up. He might not have built the perfect plane or even a good plane, but he did not quit and he followed it through to the end. For that he deserves pretty high praise.
Click to expand...

When you follow something through to the end using other people's money it's called a job. Hes just doing his job.

UAVGuy said:
Because he made decisions that the "experts" here didn't agree with ? Because he disobeyed some of the "rules" ?
Click to expand...

No, because to this point he has produced an overweight, poorly built vehicle wasting at least $2.5 million of other people's money and 7 years to get nowhere.

UAVGuy said:
There are no points for being a critic. Anyone can be a critic.
Click to expand...

Anyone can be, but I hold the values of about a half dozen or so Members here to be realistic who have successfully built commercial aircraft, parts or the servicing of, for a living, and others who are successful business people (principles don't change lmost regardless of product), or engineers in at least some related fields.

The Guy's current position of being 1 person bumbling along with a profound lack of knowlege and terrible workmanship for a multi million dollar project (and for some time now), is clear evidence of his inability to manage the project.
Last edited: Jul 30, 2020

cheapracer said:
Seems to me that they bought in the chase plane means they were prepared for flight
Click to expand...

Could also mean that they knew a flight wasn’t going to happen and for just a day or two visit the convenience and speed of flying themselves in and out made sense. Either way, we’ll probably never know.

BoKu said:
I wonder how kit builders are expected to do it?
Click to expand...

The kit includes a "wide load" banner - use as necessary??

BoKu said:
I wonder how kit builders are expected to do it?

Do we all really expect that the Raptor will be available as a 'Kit Aircraft', Whilst I feel for Peter, he's no Burt Rutan, Randy Schilter, Van Wotsit etc.
It's just one mans dream, that's now a nightmare. If/when he wakes up, smells the coffee, he might just come to his senses and go back to IT, or offer the project to a team that can actually take it forwards. No mention yet on his YT Channel that the boys have headed home :-(

How to transport an A-7 wing center section. 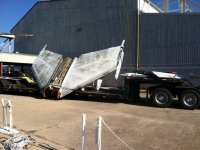 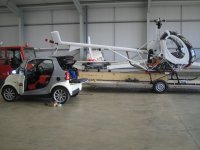 If he was based in the UK I could have built him one of these to suit.
D

rbarnes said:
Wings come off, but the move from the "shop" to the airport proved shipping the "vehicle" anywhere of distance will be a non-trival endeavor
Click to expand...

I guess it depends on the definition of "trival".
I moved mine from Illinois to FL. Cost less than $1,000.
Moving this thing to Huntsville (12,000' runway with open land around) shouldn't be too much trouble.

Sure, it can be disassembled and moved. It will be time consuming and costly but more importantly it's a huge mental/emotional setback. In PM's mind, the plane is ready to fly - or has flown so move to another location might throw PM over the cliff. He's got to work through the Elisabeth Kübler-Ross stages of grief, regroup and decide what to do. I'm sure the option to push the throttle forward and go for it will be very strong.

Turd Ferguson said:
I'm sure the option to push the throttle forward and go for it will be very strong.
Click to expand...

The probability of this is high, IMO. Pray he survives.

It also was a carbon fiber 'miracle' plane that went way overweight and ended up being 3350# empty with only a 350HP TSIO550L to push it along. A similar spec Cessna P210N (I have one) is around 1000# lighter. Walter put in a water cooled engine in order to try and gain some hp to push the tank along however this engine was finicky and caused many issues. He gave up and redeveloped the airframe for a turboprop (EA-500). However by then he was out of money and Extra went bankrupt.

UAVGuy said:
A CAT 793 rock truck is 24 feet+ wide and there is no way to make the box narrower.
Click to expand...

Just cut them in half - like they were for the first move. Not really an option for the Riptor.

I wonder if there's a way to kill the engine with a butterfly? There are videos of diesels with blown turbos running away because the turbo is feeding engine oil to burn, at least until it runs out or grenades. That could be a real problem for an airplane.
Last edited: Jul 30, 2020
J

What's preventing Peter from making the first test flight on his own?

What's preventing Peter from making the first test flight on his own?
Click to expand...

Legally nothing.
Realistically, experience.
Even the proven similar canard designs are fast high performance planes that require experience to fly safely. This one is unproven with those same dangers as well as its unknown dangers.
R

Up to this point, even Peter has realized that he wouldn't be a good person to do the actual flights. I hope he doesn't change his mind under pressure......