Aerowerx said:
I can't speak for the wing size, but I heavily researched the J-1B before I started the design.

It is a bit short coupled, and there is some question as to the horizontal tail authority. In particular, this shows up on take off. With the high-mounted engine there may not be enough elevator to get the nose up without a long take off run. Also, the few pilot reports indicate that it can be flown hands-off for only "a short time", whatever that means.

There are two ways to correct the problem. Either make the horizontal tail larger as stated, or lengthen the empenage which is what I am doing. A couple other things that are recommended is to seal the elevator gap, and install a Guerney flap on the elevator.
Click to expand...

Moving the horizontal tail lower into the center of the prop blast might help also. See Lake Amphibian for mid level example.

The J-1B is a shoulder wing pusher, with the engine mounted high on top of the wing. What I am doing on my build is using the T-Tail from the Janowski J-2, which puts the H-tail directly in line with the prop. Hence the name I am using: J-1T

Fan444, what is this plane? It is identical to what I am building.

The J-1B is a shoulder wing pusher, with the engine mounted high on top of the wing. What I am doing on my build is using the T-Tail from the Janowski J-2, which puts the H-tail directly in line with the prop. Hence the name I am using: J-1T
Click to expand...

That's good then, I was just looking at the high T-tail in post 37 which appears much above the thrust line to me.
F

Hi, I'm new here so, nice to meet you all =)
all peaple talk about the plane's aircraft that we can fine it on yahoo, now we are in 2020 but I didn't find it.
I LOVE ultralight aircraft and (I think like ALL of you) I want to build it so, have some of you that have the planes and wants to put it for free download? PLEASE =) Of course, it can buy BUT if it's possible to recive it for free, I will be greatefull.

Victor Bravo said:
5 and J6 are favorites of mine too. The perfect configuration for "tomorrow's" ultra efficient and high performing personal flying machines. It will be very difficult to come u
Click to expand...

Which Yahoo Group are you refering to? I already ordered the Plans on CD for $9 to look at, but they might have more info, or updates on the plane. From some photo's I have seen one in Foam and Fiberglass, and some in Wood.

It does look similar to the CGS Hawk line as bmcj said. I was wondering if it couldn't be adapted to either using just 6061 Tube & Fabric, or maybe Carbon Fiber, or a combination of materials. Just has a nice look to it. I read some where they can even put a VW engine on it.

Seen someone hauling what looked like a Vari Eze, but could have been a Long Ez down I35 the other day on a car trailer, always liked them also, to bad no one ever made any Molds for them, they just take to long to make. Just got a glimpse of it as we met at 70mph. There was a Hybrid Long Ez version made in Carbon that used Molds, but they closed up doors years ago. Brain Dead at the moment, can't remember it's name, I think Burket or something like that. He should have just produced a cheaper version out of fiberglass, more people would have probably bought them. The difference in Weight, and Speed, with the same HP engine couldn't have been that much.
Click to expand...

While not a J1B is was in my notes the Maya ultralight Some Prize Links from the home page of Graham.J.Percy! a vintage link very slow to load. 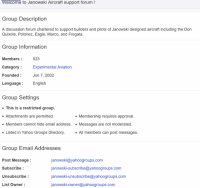 I was going to reply that they were available free on the Yahoo group, but I see a PDF is in post 48.

I really like the design, and was going to build one then decided it was beyond my skill at the time.

I did spend a lot of time going over the plans for the J-1B, and also the J-2. In the J-1B there are a few areas with some discrepancies. It has been a while, but one area is the main spar carry through. There is a discrepancy in the thickness of some of the wood pieces, and some interference between the carry through and the engine mount bolts. Another area of confusion is the angle of incidence of the wing. IIRC, the angle shown on the plans is to the lower surface of the wing, but is shown as the chord line in the drawing. The chord line should be at an angle of 6 degrees with respect to the top of the fuselage.

If you dig around the old threads on this may still be here. Use the forum search function.
R

AFAIK Only a single Speed Canard is as imported to the USA ... something to do with a drone project, but it was eventually restored to man-carrying and featured in a recent American magazine.

There was a Gyroflug Speed Canard at OSH last summer parked among the Rutan canards which is the second time I have seen one there. The FAA registry shows 6 on the registry with 5 of those holding a current registration.
F

Hello. I, too, am new to this site/thread. Does anyone have the J-2 plans and builder's manual? If so, it would be greatly appreciated if you would post them here. Do you know if the J-2 can be built as an ultralight (Part 103)?
Thanks!

Here are some J2 drawings for reference. It is a VERY cute little bird. I doubt it would ever make US103 regs for weight/speed.

FlyAway said:
Hello. I, too, am new to this site/thread. Does anyone have the J-2 plans and builder's manual? If so, it would be greatly appreciated if you would post them here. Do you know if the J-2 can be built as an ultralight (Part 103)?
Thanks!
Click to expand...

The only plans I have seen for the J-2 is a poorly quality scanned copy. And it is in Polish. Hard to read, but with diligence and Google Translate you can figure it out. I have a copy on my HD somewhere if you are still interested.

You can certainly make something that looks like a J-2 as a part 103, but it would be a completely new design. In other words, you have to do all the design work from scratch.

Edit: Just looked at what billyvray posted. Same thing I have.
D

so 10 sheets? Wondering if anyone has personal knowledge of the history line with the J1-b and the J2?

billyvray said:
Here are some J2 drawings for reference. It is a VERY cute little bird. I doubt it would ever make US103 regs for weight/speed.
Click to expand...


Check this link to see the J1B flying.

Variously known as "Przasnicza", "Don Kichot", or "Don Quixote", the J-1 was designed by Jaroslaw Janowski in 1967. It featured a single-seat enclosed cockpit, conventional (taildragger) landing gear and a pusher prop configuration. Wings were shoulder-mounted and strut-braced, with a 13% thick Clark "Y" airfoil and No Flaps.

With the help of Witold Kalita, the prototype was constructed in Poland and first flown on July 30, 1970. It weighed 286 lbs empty, and was constructed mostly of wood with a steel tube frame and fabric covering. Wings were constructed with one-piece ribs and a plywood covered leading edge "D-section".

Power was provided by a two-cylinder (23 hp) "Saturn 500B" engine which was also designed by Janowski and constructed by S. Polawski."

Switching the Basic Design to 95% 6061 Tubing ought to bring it in under 254 lbs. A better Airfoil is needed to lower the Stall Speed and lower the Max Full Power Speed.

David L. Downey said:
so 10 sheets? Wondering if anyone has personal knowledge of the history line with the J1-b and the J2?
Click to expand...

Just what I read about it. There used to be a collection of articles on the Yahoo group for the J-1B. I doubt that they are available any more.

From what I recall, the J-2 was intended as a motorglider for glider pilots that wanted to transition to power flight.

The J-1 had a steel tube cage around the cockpit. That was removed in the J-1B to make for simpler construction. The J-2 is similar to the J-1B except for being a low wing, and the T tail. The J-1B had a problem with elevator authority and requires some simple modifications (at least one person was killed because of this). With the full flying T tail the J-2 would not have this problem at all.

Beyond that, I don't remember much else about it.

Sorry for the thread drift, but Janowski's later designs (J-5, J-6) are absolute favorites of mine and truly need to be brought back out of exile.

You could build sort of a J-1 "replica" as an ultralight, but it would be essentially a new airplane that kinda looked like a J-1.

Victor Bravo said:
Sorry for the thread drift, but Janowski's later designs (J-5, J-6) are absolute favorites of mine and truly need to be brought back out of exile.
Click to expand...

The J-6 Fregata is far from forgotten. It is in production as a UAV 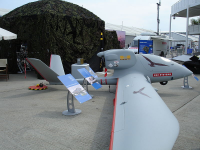