proppastie said:
well if you feel bad about building with no serial number.....e-mail him a donation....which might be the fair thing to do.
Click to expand...

The thing is, Mr Colomban doesn't so email it has to be snail mail!

First up, a picture of the brake adjusters alodined and installed. 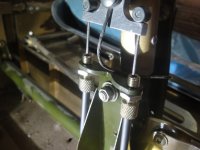 And then better pictures of the brake cable layout and the support for the landing gear bow. 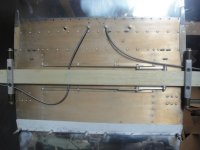 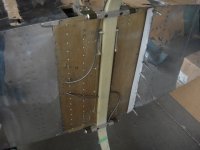 And with the cover clecoed back in place. 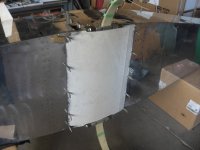 I tipped the plane on its side and spent some time swapping the 8 nutplates for the support pieces over. For reasons unknown to me, I previously used 6-32 nutplates and screws, the plans call for M4 fasteners so 8-32 hardware is more appropriate here. I had to drill the holes in the angle pieces out to suit the 8-32 machine screws and everything went back together smoothly.

While I was browsing through the vast collection of build pictures that I have found in all corners of the internet, I came across one from the guys in Moscow that are building a couple of CriCri's. I wont post the link but if you look on fakebook under "Cri Cri MC15 in Moscow" you will find their build. They started out with a thread on Airwar.ru but that turned sour so they decided to go elsewhere to post updates.

Anyhow, they posted this picture below of their landing gear clamp pieces. They have done some extra smoothing and shaping and it looks a work of art. 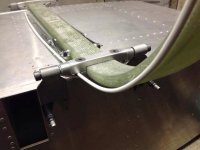 I decided to give my part the same treatment while I was working on the landing gear, so I removed both of the clamps. 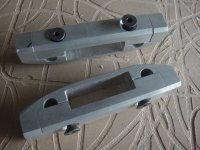 I started by bluing the ends with a Vivid pen and used a washer and scribe to mark out where I needed to file to. 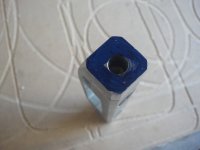 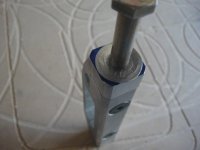 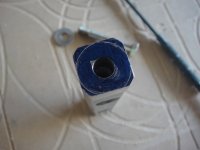 With some careful filing and sanding the new shape looked a lot better. A final pass over with a green scotchbrite pad gives them a nice sheen. 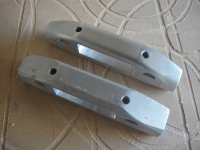 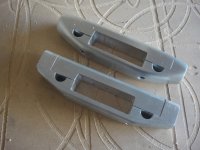 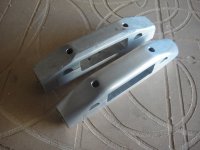 And then bolted them back in place for now, I will alodine and paint these at some point. 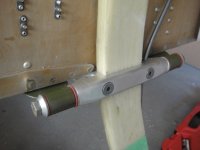 Have you ever counted how many pieces altogether your Cri-Cri aeroplane consists of ?

Speedboat100 said:
Have you ever counted how many pieces altogether your Cri-Cri aeroplane consists of ?
Click to expand...

Is the number available ?
T

3 less than the Space Shuttle

And more of them are hand-made.
P

Plus the one's he did twice...

Speedboat100 said:
Is the number available ?
Click to expand...

I will dig it up, I have all the parts listed on spreadsheets

It is in excess of 2400 parts including bolts and around 3500 rivets from memory, So easily close to 6000 individual parts!
L

M-R-S.
1. Rounding those holding brackets makes them look nice, but I would be more inclined to radius the sharp inner edges that contact the fiberglass legs. I would most likely want to put some rubber inserts in there as well.

2. I don't know if the clamps are a tight fit, but I'm also wondering what stops the legs moving from their predetermined position under load i.e creep from one side to another. Could lead to a failure.

3. Looking at Carbon Legs for my design, it was discovered that as the legs flex-up (the center between mounts) flexes down, the position of the mount moves inwardly. That means the mounting position rotates inwardly and outwardly to accommodate those movements.

To answer your questions.

1. The landing gear bow is a really tight fit in the clamps when they are bolted up. There shouldn't be any movement at all between the clamp and the fiberglass. The clamps themselves are bolted to bushings at each end that allow them to rotate slightly.
2. & 3. Each bushing is mounted on a metal hanger that allows it to move inwards around 1mm on each side to compensate for the landing gear bow flexing under landing loads. The mechanism on the underside stops the whole landing gear from moving side to side while allowing some vertical movement where it attaches to the bow .
4. I agree, there has to be some movement in the mounting system of something is going to break!
Overall a very clever setup, for the cost of some complexity.

Incidentally the Zenair Cricket rip off had this mounting changed to a singled folded piece of aluminium clamped directly to the bow. I don't think any of them have flown enough hours to show up any faults with that particular setup but it seems to be more likely to crack in long term use.

Here is a screenshot from the plans showing the hanger for the clamp and also the mechanism to prevent any sideways movement of the bow. I think if the landing was really hard the sides of the hangers would possibly hit the sides of the fuselage and damage it, but I am not aware of anyone having had that issue.

MadRocketScientist said:
It is in excess of 2400 parts including bolts and around 3500 rivets from memory, So easily close to 6000 individual parts!
Click to expand...

I took the advice from someone here on the forum (can't remember who sorry) about getting your aircraft supplies while they are still available and went to the local shop and purchased some more bolts and some alodine that I had been putting off for ages. 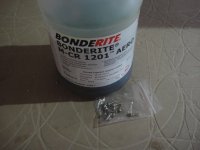 I have revisited the gear leg fairings and made good progress on the drawings.
From my observations of most, if not all, of the other CriCri builds, there was a part about the gear leg fairings that always bothered me. The plans also make the same mistake. The fairings aren't aligned with the local airflow. A while ago when I still had a working copy of JavaFoil on my laptop, I had run a few flowfield tests with the CriCri wing at varying angles of attack. It was soon apparent that the angle of the flowfield under the wing doesn't change very much at sensible flight attitudes. Armed with that information I overlayed the landing gear drawings on the flowfield and proceeded to adjust the fairing to airflow alignment.

From reading Hoerner's book, Fluid dynamic drag, when two parallel struts come close together the drag goes up. Ideally a strut would intersect the wing at 90° for the lowest drag. With the landing gear strut joining the CriCri fuselage almost parallel to the wing, I feel another approach is needed. I figure that the closer the landing gear gets to the wing, the side of the airfoil closest to the wing needs to be flattened to avoid accelerating the airflow between it and the wing like a venturi, creating more losses. In the picture below I used a somewhat flat bottomed airfoil with the flat part up against the underside of the wing. This gradually transitions to a symmetrical airfoil further down the gear leg.

Here is a 3D render of the gear legs and fairings.

And here are the previews of the two mold halves in my CNC software. I might start cutting these tomorrow, all going well. These will be really the only parts of the wheel fairings that will be in fiberglass, all the rest I hope to make in aluminium.

How far from the fuselage did you kill off that upside down airfoil. Tricky one to guess at. Nice detail to mess with. Still kills me that you think like a composite guy but then use all the composite mold making skills to make hammer forms for aluminum using CNC. Amazing.

Jay Kempf said:
Taking little breaks to read Hoerner is not how normal people live their lives
Click to expand...

Is anyone here “normal”?

MDS, Considering the weight, the 'allowed for' movement seems reasonable, at least it has been considered. I did see the mechanism for retaining legs in central position but the drawings makes it much clearer.
Thanks - an interesting approach.
George

How far from the fuselage did you kill off that upside down airfoil.
Click to expand...

I blended the airfoil in Rhino and called it good, due to the two end airfoils being sorta 90° to each other on the strut the blend is continuous. I think the upper airfoil alignment makes the most difference.

Is anyone here “normal”?