A different view of flight safety.

Bet Bob Hoover would say he is not the best.

Pops said:
Bet Bob Hoover would say he is not the best.
Click to expand...

But Chuck Yeager would claim to be the best.

I agree, Rockiedog2, any pilot who names himself “Turd” must be good.

BJC said:
But Chuck Yeager would claim to be the best.

I agree, Rockiedog2, any pilot who names himself “Turd” must be good.

I KNOW there's a story there...but I don't think I wanta know what it is!!

bmcj said:
No, the impossible turn is when a pretty girl walks by and you try to turn to watch without your wife noticing.
Click to expand...

#2 never has cared, she thinks all of us are no good and it's to be expected.

59 years and 3 months on #1, one in a million. Joe has met her.
I tell her she is a good one it spite of what her mother told me before we were married.
Also had the greatest mother-in-law that God ever made.

There you go again and got me OT again , Joe.
T

My opinion on the Cogan crash is the pilots would not power past N1 of the day. They left power on the table when they could have used to power out over their icing. I’m sure they worried about over torque and getting fired and never thought they would die. They should have pushed the power levers to the stop. Of course there was a chain of events. I left my regional airline about a year before they bought Cogan but I still had friends there when it crashed. They sight total hours of that crew, which I thought was ok. Before all that my regional had talked the FAA in allowing 400 total hour pilots fly right seat in the CRJ. 400. The Cogan crash added some parity, they had the FAA convinced to allow 250 hr pilots fly passengers from the right. Of course that vaporized. The chief pilot played along for a while, but told management it was getting stupid. They stuck him back on the line flying the proverbial rubber dog dodo.

BJC said:
But Chuck Yeager would claim to be the best.
Click to expand...

But Chuck Yaeger was a turd.

pictsidhe said:
But Chuck Yaeger was a turd.
Click to expand...

Generally Chalmers Goodling has been made to look like a turd: https://en.wikipedia.org/wiki/Chalmers_Goodlin

pictsidhe said:
But Chuck Yaeger was a turd.
Click to expand...

Yup, that agrees with my assessment. He most likely, still is.

When I was taking lessons back in '74 in a Cessna 150, I had 10.5 hrs in my log book when the instructor told me to taxi back to the terminal and let him out. I did my three take offs and landings and got signed off for solo. If he had told me the same thing the week before, I would not have been ready. That one extra lesson did the trick.

robertl said:
When I was taking lessons back in '74 in a Cessna 150, I had 10.5 hrs in my log book when the instructor told me to taxi back to the terminal and let him out. I did my three take offs and landings and got signed off for solo. If he had told me the same thing the week before, I would not have been ready. That one extra lesson did the trick.
Click to expand...

Perhaps he should have started with that lesson.
F

I just discovered this thread. I don't care if that CFI has 1,000,000,000 hours. IMO, he and the pilot who thought it was 'all over if you stall spin' are totally wrong. IMO, there is an over emphasis on avoiding the evil, awful stall spins at all costs and a frightening lack of training in unusual attitude recovery.

As far as I'm concerned, the FAA was wrong to remove the actual recovery from a spin from the private license requirement (~late 1940s?) The current requirement that you just have to tell the examiner what you would do in a spin is complete nonsense. You're likely not to know what way is up or down or sideways when you enter your first spin and the plane has rolled over 110 degrees and is rotating in a way your body can't comprehend.

I was initially taught the 'it's all over you're dead if you spin - so YOU NEVER EVER BETTER GET INTO A SPIN' mantra. What nonsense. I went right from my private license into aerobatic training. I was completely bamfoozled for the first dozen or so spins.

The emphasis on a minimum recovery/flying speed completely misses the point that the airplane can be stalled with the nose pointed down and with the airspeed increasing. I lost a friend who just missed that the plane can be stalled in the situation I just described. It's totally counterintuitive to push the stick forward when you're nose down, accelerating down, and maybe spinning to boot.

As I posted elsewhere..

My instructor used spins as her filter to chose who to teach. WW2 WASP pilot, with more hours in a P-40 than a lot of combat pilots. Tow plane pilot for a local glider club. I was offered a ride after wing holding & line retrieval for a few weekends. We discussed my previous experience during the preflight, and after releasing the glider, she let me take the controls for a bit. Directed me out over the middle of the valley, told me she had the controls, and to be ready to take over on command, then snap rolled us into a spin, yelling " you have the bird! ".

She let me out after landing & told me to come back next weekend. good

The "old timers" at the hanger asked me how it went. "Fun!" Then they told me that's how she picked students, if they didn't panic or puke, she'd consider taking them up again. ( they had, of course , watched )

She had no patience for fools. At all. Firmly believed you should be able to recover from any attitude without notice.

I believe she saved my life when I got sucked into a cloud & got spit out 200 odd feet AGL over a ridge line banked @120 degrees & nose down @50 deg. as I plummeted out the bottom. Inverted death spiral?
W

RE: Yeager, Hoover, all the greater/lesser fighter pilots... and Dad... here is how they REALLY see themselves... 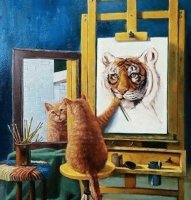 Flyboy2160,
How right you are - HOWEVER may Light Sport (LS) aircraft are nor designed for Spin recovery, IN FACT in Europe where LS is referred to as Ultralight Spins are forbidden. So if you but a European Aircraft, there's not enough un-blanked rudder, in the spin, to correct the turning, as you should have between 1/3 and 1/2 of the rudder un-blanked, which lies between 30° to 60° (in level flight).Hope that makes sense.
Also some suggest their aircraft are SPIN RESISTANT, where as they merely restrict the Elevator travel.
Like yourself I believe that unintentional spins can happen to anyone and training should be mandatory for all LS Pilots.
So I'm with you on this 100%.
George
L