Topaz said:
Okay, those are two good reasons. You've answered my question, which was meant only to help focus on the "why." Thank you.
Click to expand...

And I often need 'focus' !
Hang around, if this develops, if for nothing else but keeping us focused.


Vigilant1 said:
Just to ask: Why the opposed twin rather than opposed 4? Simplicity, weight vs smoothness, TV?
Click to expand...

When I first came up the the idea that I could 'roll' my own' I looked at 4 cylinders. I found that there just weren't many examples of small displacement 4 cylinders on which to build. I was also constrained by this engine having to be usable on the Quickie.....My personal goal.


Victor Bravo said:
The half-VW is close to the weight, some work could be done to shave off that 5 pounds without too much aggravation, but you'd be making a new case casting, oil pan, rear case, etc. just like Pete did with his project.
Click to expand...

My original CAD shows this very lineage - except I tossed the constraints imposed by that $#@!%^@ camshaft configuration from the start. My project and Pete's were very similar in approach and philosophy. He started with the O-200 and I with the VW.................. and generic OTS parts for the reasons TFF mentioned.


Topaz said:
You could keep everything else on the VW - case, crank, rods, pistons, cylinders, valve train,
Click to expand...

That feature HAS to be eliminated. It causes all kinds of problems. Some are:
It puts side load on the rocker arms making them prone to pop off the shaft.
It restricts exhaust port configuration.
It puts side load on the lifters leading to increased bore wear.
It's too close to the crank requiring grinding to clear stroker cranks.
Oil for flat tappet cams is not readily available at Walmart.

I'm convinced that Ferdinand chose this configuration for ground clearance reasons only.

As much as I do not care for Ford's engineering style,
They have winner with Modular 3 valve series heads.
A couple bevel drives, cross timed waste spark plugs.
Dual port injection. 100mm Bore, 2.5 in gives 997cc.

The short stroke will help on weight, but you will need
aluminum or magnesium case, and to be serious with
weight shavings. Think thin, or missing components.


Hot Wings said:
And I often need 'focus' !
Hang around, if this develops, if for nothing else but keeping us focused.
Click to expand...

Oh, I'm great at kibitzing other people's projects. It's a gift.


Hot Wings said:
That feature HAS to be eliminated. It causes all kinds of problems. Some are:
It puts side load on the rocker arms making them prone to pop off the shaft.
It restricts exhaust port configuration.
It puts side load on the lifters leading to increased bore wear.
It's too close to the crank requiring grinding to clear stroker cranks.
Oil for flat tappet cams is not readily available at Walmart.

I'm convinced that Ferdinand chose this configuration for ground clearance reasons only.
Click to expand...

Entirely possible. So now you have a "real" challenge. New heads and new valve-gear. Let's see how far down this rabbit-hole goes.

And, with respect to the deceased, that was where Pete ran into some issues with the O-100: One change led to another, which led to another, which... At one point, the O-100 was basically a new engine using O-200 cylinders and valve gear. I'm exaggerating a little, but not a lot. He backed off on that a little and brought more "stock" O-200 parts back in, because "perfect is the enemy of good enough." Pete and I talked about that a couple of times. I'm not at all taking credit for that retrenching - Pete came to those conclusions on his own - but it's a good example of how it's very easy to start with "We'll use OTS items for almost everything," and end up with an almost completely custom-designed thing. Resisting that process takes iron-bound discipline.

Topaz said:
I'm exaggerating but not a lot.<< >>and brought more "stock" O-200 parts back in, because "perfect is the enemy of good enough."
Click to expand...

BTDT. And you aren't exaggerating a bit. I'd already been down that path before I heard of the O-100 and saw a lot of the same development progress. It's just like someone thinking "I'll just add a couple of rib bay to the span. It can't be that hard". It's a rabbit hole with snakes, spiders and carnivorous Tribbles.
I've got work to do today so I'm leaving this for the rest of you to ......... develop.

I thought I saw somewhere that Jabiru trialed a 2 cylinder 1100cc 40hp motor.
Maybe make one with a pair of gen 4 cylinders.

Topaz said:
Now that would be a worthwhile project - to design new heads for VW's that help solve the heat problems once and for all. Even if you just removed the max-rated/continuous power limitation it'd be a huge step forward. You could keep everything else on the VW - case, crank, rods, pistons, cylinders, valve train, and just focus on the heads themselves.

It's a worthwhile project, but not really the one HotWings is looking to do, which is also worthwhile.

Now isn't that what a certain company called Rotax did? Sort of....

Hot Wings - Why the specification call-out for an opposed 'boxer' configuration?

Brünner said:
Now isn't that what a certain company called Rotax did? Sort of....
Click to expand...

Limbach, actually, but yes. And their engines are certified and aren't sold to individual builders, thus the problem HotWings is working to resolve.

Caveman machine tools and jigs. Think being able to machine the castings with little more than a lathe and a drill press.
I realize they may not be the most aerodynamic configuration.
If you can make a good case for an inline/v-twin/radial we can always take another fork in the road.
Tea is drunk - back to work.

How about an integral casting like the Onan, with air cooled heads?
G

The past 40 years are a chronical of failed small 4 stroke engine projects:

The Franklin 2A-45 etc is probably the most recent certified production engine in this class. A few might still exist if they haven't shaken themselves to death !

Every single one of those projects failed. Some of them had significant resources behind them (Lotus, HKS, Jabiru). I would start by asking why they failed and what is it about a new project that will succeed where all these previous projects failed. A better 1/2 VW has already been done (Global --> Mosler + Hapi Hornet) so why reinvent that ? Someone was selling the manufacturing drawings for the Mosler engine recently.

Why did all these projects fail ? Failure to read and understand the market ? Did the cost of manufacture not meet what the market was willing to pay for a 40-50 hp engine ? Vibration ? Under resourced ? (clearly not in some cases). Bad layout - not suitable for installation in an aircraft ? Reliability ? Market resistance to new engines ?

Also designing and producing a new engine is not easy. Jabiru and Rotec have had significant issues and Jabiru has produced something like 6000+ engines (hopefully the Gen 4 engine has fixed the issues).

I believe what you are asking for is a four stroke engine of approximately 1/2hp per pound for 80Lb maximum with max rpm of 3600? But what does it include? Exhaust, carburetor with anti icing or fuel injection, magneto(s) or electronic ignition or both, starter motor or hand prop, does it include motor mount does it include a generator or alternator? It is ambiguous without more detail. You cannot ask for other ideas that make actual sense without a more complete picture of the requirements. Apples to apples not apples to oranges.
Maybe a firewall forward (or rearward) overall weight including propeller might be more useful and then individual differences like hand propping vs starter motor can be judged in comparison with other features you like or dislike to end up with the monster you like the best?
Last edited: Jul 15, 2021

Goflybefree said:
and I am sure there are more ....
Click to expand...

Was the Weslake mentioned the same as the Hexadyne P60?
Had forgotten about the Pong. That was a while ago............
Not sure you can call a 1000+ production run a fail in the aviation market? The fact that they are no longer around is significant.

Hot Wings said:
Not sure you can call a 1000+ production run a fail in the aviation market? The fact that they are no longer around is significant.
Click to expand...

This is Aviation, where dinosaurs still walk the earth. For all practical purposes extinction is failure.

Tiger Tim said:
This is Aviation, where dinosaurs still walk the earth.
Click to expand...

I resemble that remark !

Hot Wings said:
If you can make a good case for an inline/v-twin/radial we can always take another fork in the road.
Click to expand...

Yes possibly, but it would de-rail the concept of this particular thread.

At the risk of doing that to one degree or another from a different direction, perhaps the question should be what exactly can and should be done to the half-VW to create a better 80 pound 40HP HBA engine? Your list of issues with the VW above is most of it, so the question then becomes can you make or modify new components to create the "Hot Wings' Half", a half-VW that does significantly better than the Casler?

Verner also made the VM-133 2 cylinder horizontally opposed engine but that was 81 hp (TO) 72 hp (Cont) and about 132 lb. Note sure if this one is still in production. A nice engine if it were a bit smaller. 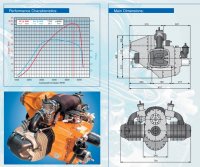 Victor Bravo said:
I resemble that remark !
Click to expand...