Those full-size Yaks were not replicas, they were genuine Yaks from the the Yak factory, new-built. There is at least one based here in NZ too.

I promise you that it will look good.

I remember that Bf-109 replica, the gear collapsed after a landing. The builder got several enquiries regarding building plans or kits, but he decided that this particular plane does not lend itself well for a scaled down replica.
The gear is notoriously bad, and the cockpit is quite cramped even in the full-size version!
V

An interesting aircraft I have looked at a bit is the Avia B-534. It's a prewar biplane Czech fighter and one subscale version has been built in Europe.

Here's a Youtube link:
I have a set of giant scale RC plans for it and combined with an inline engine such as a Viking or AeroMomentum I think it would be a nice project.

Here's a comparison study I did a while ago:

Riggerrob said:
...A couple decades ago, a Russian factory built a batch of full-sized Yak replicas powered by Allison engines...
Click to expand...

Yak 9, one of the best WWII fighters; it was nice to finally see one up close:

Tragically for the new owner, a year or two later it ended up looking like this: 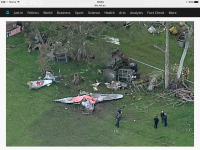 The Yak 3 was one of the very best short range interceptors of WW1 and scaling it down to a useable size for modest power can result in a very convincing machine, since its original size means that one does not have to reduce it to the point where is looks ridiculous up close and personal. This has been well demonstrated in the Czech replica which looks and sounds just like the real thing with an excellent performance to boot.

But one of the problems with picking a typical WW2 low-wing monoplane fighter is that, when drastically scaled-down, generally speaking, there is always a 'toy-like' impression when viewed at ground level. Fighter biplanes on the other hand have an advantage in that one can generally 'look up' at the upper wing, unless you are physically a very tall individual. This helps to create a better sense of realism 'on the ramp'. I have suggested the Avia B.534 in the past as a good example and motors like the Aeromomentum (inclined version) would suit admirably.

Although slightly off-topic, the Vale PV-6 Stormcock project which is moving with glacial slowness, represents a private venture fighter biplane, inspired in part by the Blackburn Lincock of 1928, although much simplified. I attach an image of how it will look. Intended motor is the Verner 5Si direct-drive radial.

A couple of Lockheed P-38 Lightning replicas have flown in the USA.
One of those guys was last seen building a scaled down replica of a 1930s-vintage Sikorsky flying boat.

One New Englander built (circa 1970) a scaled-down replica of a WW2-vintage Westland Whirlwind, twin-engined fighter, powered by a pair of VW engines.

An American named Bally recently completed an all metal replica of a 4-engined, Boeing B-17 Flying Fortress.

A few years back, a group of Frenchmen built and flew an all-wood, scaled down Dh. Mosquito twin-engined, bomber. Since some (night-fighter) versions of Mosquitos had flame-hiders - that almost resembled the cheek cowls on Formula One racers - they hid horizontally-opposed Lycomings in nacelles that looked realistic from a distance.

Most recently, a regular poster (on www.homebuiltairplanes.com) has shared pictures of reduced-scale Me-262 and B-25 cockpit mock-ups he has built.
Last edited: Dec 23, 2020
R

I want to build a half-scale replica of an asymmetric, Blohm & Voss 141 recce airplane. It has the same "hot-house from hell" faceted nose canopy as a Dornier 17 or Junkers 88, but only one engine to care and feed. The asymmetric configuration should be good for a laugh ... if only to poke fun at modern neo-natzis!
Hah!
Hah!
R

cavelamb said:
Something a little faster?
F8F carrier based interceptor.
Rotec radial engine.
All aluminum structure.
This is a bit larger aircraft.
View attachment 23867
If we can have imaginary engines then...
Double Row Rotec radial 18 cylinder?
View attachment 23868
This one could also morph into a
two seat T28?
Click to expand...

A guy near Montreal built a reduced-scale replica of a Grumman Bearcat, during the 1970s. The engine was only around 100 horsepower (VW or Continental????).
R

War Aircraft Replicas used to sell plans for half-scale replicas of: F4U Corsair, Focke-Wulf 190, Mitsubishi Zero, P-47 Thunderbolt, P-51 Mustang, Spitfire, Sea Fury, etc. They were constructed on wood spars covered with foam blocks and sanded until they looked like WW2 fighters. Their outer skins were hand-laid composite. They were originally designed for VW engines, but most were too heavy and got Continental O-200 engines instead.

Marcel Jurca designed a whole stack of replicas including: FW-190, Me.109, Mustang, Spitfire, etc. ranging in size from half to full scale.

We're still finishing up our P-36. Running into all the little gotchas at the end of assembly once most everything has been fabricated but it has to all fit together. At the same time.

I have my eyes on the YAK-3 at some point down the road, might be one of my favorites.

Sorry about my typo, WW1 instead of WW2 earlier. But a Yak-3, Scott, would be a brilliant replica to re-create. Scaled down, but not by too much, it would retain the presence of the real thing, much more so than say a similarly-sized P-47 for example. Would you consider the Aeromomentum motor for such a project? I began drafting both the Yak-1, with the original rear decking line along with a Yak-3 many years ago for all-wooden construction following on from my Taylor Monoplane/Yak-9 lookalike which flew like a JT-1 of course. But it was fun while it lasted! I got a little further with a Lavochkin La 5FN design, where one could fit a flat-four inside a cosmetic radial cowl and later had the opportunity of acquiring an Ivchenko radial in a swap. But the then PFA would have rejected that engine for being too powerful. But what a combination that would have been - a hefty Russian radial in a Russian fighter replica!

Yes most likely it would want an AM-15 for the mainline YAK, or the Verner 7/9 if doing the YAK-3U, but if one is willing to go with the extra body contour work then it's not all that different from an La5/7

If I did them it would be in the same framework as the P-40. Nice and compact, low weight, but still can look good and perform well with 120hp.
Y

GCD89 said:
I've got idea's floating around in my brain, but can't decide. And I don't want to yet. I wanna do a warbird build when I can do it right and fully. Other things, you can cut corners, or changes something, but when I'm gonna do my warbird build, I wanna be able to go all out, and right now, that just isn't in the cards. The ideas I have are scale versions of

One day I'll sort it all out and figure out which one I like best...
Click to expand...

Brünner said:
I remember that Bf-109 replica, the gear collapsed after a landing. The builder got several enquiries regarding building plans or kits, but he decided that this particular plane does not lend itself well for a scaled down replica.
The gear is notoriously bad, and the cockpit is quite cramped even in the full-size version!
Click to expand...

Gear looks down right suicidal to me. Even German pilots from WWII interviews I have seen say the same thing.
V

Just finished my 70% P-39 mock-up. It would make a good looking homebuilt. All three are now ready to hang in the EAA 292 hangar in front of a sky mural.

In case you have missed it, Avions MArcel Jurca has a new website (updated some time last year I think). Home

M. Jurca was famous not only for this Tempête (the poor mans fighter), but also for his plans for the P-51, FW-190 and Spitfire - in full scale and scaled down versions.

vhhjr said:
An interesting aircraft I have looked at a bit is the Avia B-534. It's a prewar biplane Czech fighter and one subscale version has been built in Europe.

Here's a Youtube link:
I have a set of giant scale RC plans for it and combined with an inline engine such as a Viking or AeroMomentum I think it would be a nice project.

Here's a comparison study I did a while ago:

Brünner said:
I remember that Bf-109 replica, the gear collapsed after a landing. The builder got several enquiries regarding building plans or kits, but he decided that this particular plane does not lend itself well for a scaled down replica.
The gear is notoriously bad, and the cockpit is quite cramped even in the full-size version!
Click to expand...

I think that one was a Jurca MJ90 100% scale. Powered by a Ranger engine it was not built well, I talked to an IA who inspected it, he told the builder that it was unsafe to fly. That was before the gear collapsed. It was offer to a museum which turned it down as there was a large lien from the airfield and the airframe was in bad shape from sitting.
You must log in or register to reply here.
Share:
Facebook Twitter Reddit Pinterest Tumblr WhatsApp Email Link