Some more lower stringers in today, as well as corner gussets .. 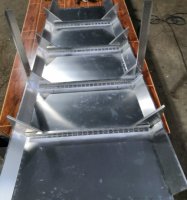 A Member was kind enough to suggest I run out and buy a cheap junk battery drill for de-burring, because they are weak and slow, ideal for the job ... and he was right, the drill bit is even heavier than the drill!

Thanks to that Member, and I'll get a better bit later for it, or cut the drill bit down.

Funny how you just get into a habit of doing things one way for decades, when there's better alternatives. 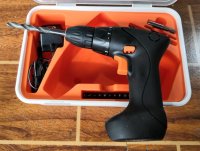 I had to do some revision today, not for the actual design, but to make the assembly process simpler and more accurate.

It actually ended up involving me going back home late morning dropping an offcut of aluminium sheet to the laser guy, designing new corner gussets, emailing the file to my laser guy, picking them up after lunch, removing the 8 old gussets, and installing the 8 new ones (bottom fuse sheet now, top also has 8, later).

I also tried a fuselage side to see if it would line up, happy it did, making changes to some gussets is ok, but I really didn't want to find an error in the large parts ... 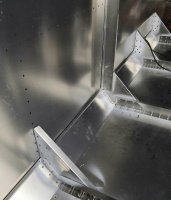 Some of you may have noticed I have no 'weight reduction' flanged holes in my stringers and gussets, very simply because there could be mistakes in this first build, and I'm not going to all that trouble then find I have to make the parts all over again. The weight difference is negligible for this first one for testing.

Later builds will have them, just explaining why this one doesn't if anyone was curious.
Last edited: Nov 25, 2019

This are my actual new gussets being cut today ...

What looks like the same parts here, is actually the top fuse skin assembly, which in fairness is almost identical to the lower skin assembly above.

I started to, well wanted to install the vertical stringers, then realised this idiot got 8 new gussets cut yesterday, but I actually needed 16, 8 for the upper skin assembly as well, so another trip to the laser shop today. All good, 2 hours later back again with 8 more new gussets .. 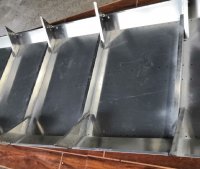 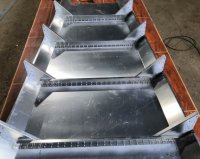 The lovely rivet lines, thanks to CNC .. 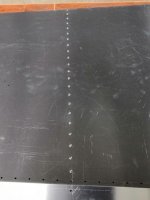 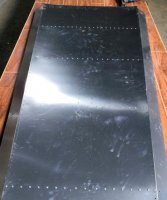 Then I added some verticals ... 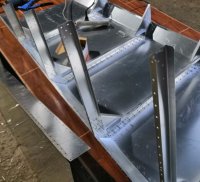 I realised a few days ago that I had added the rivet holes into the verticals without checking the actual distance to the lower or upper skins, I was expecting to have to laser new verticals with adjustment to the hole's position up or down relative to the fuse side skins, or at least a couple of the verticals, I couldn't believe my eyes when all 4 vertical's rivet holes actually lined up with the side skins, just plain good luck, no skill involved! 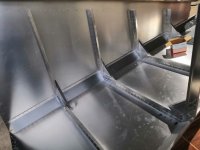 And while I was there, I video'd the laser again, just love it, it's mesmerising!

The bright orange flashes are when the laser hits the supporting steel stringers underneath, it has no effect on the cuts.

For those who, just like I do, read build blogs to look for interesting ideas to put in the memory bank, here's my simple fuselage foundation.

Or you could curve the side skins to make he corners softer, but I have specific reasons why I wanted the 90 degree corners.

Initially I actually had filler gussets to form the triangular corners, then it struck me to eliminate them and just simplify it with the 45 degree folds in the upper and lower sheets. 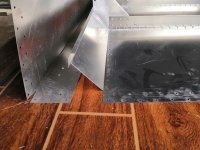 My foundation of thought for the fuse originally started with ideas from the ICP Savannah and how it's constructed .... 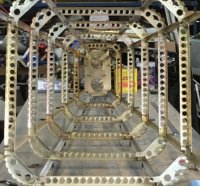 So today I added the rest of the vertical stringers, and introduced the top skin assembly to the lower skin assembly. 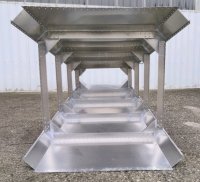 Then I introduced the side skins 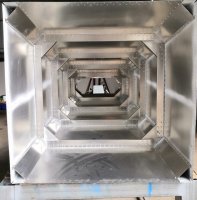 I went to see if the tail cone was all ok, then horrified to realise I couldn't put it on as the cone overlap inside the fuselage was larger than the tapered finishing end of the fuse!

But was all ok, I managed to lift the corners of the side skins and slip it in, phew, I had in my head already started designing it!

Well not much I can do further with the tail end until my 2024 sheets arrive in the next few days for the HS spars.

But now the rear fuse has some form, I can get accurate measurements for the roll bar and look at creating the cabin area forward of the roll bar now. I already have a plan and basic design, I just wanted accurate proportions to work from.

I spent about 5 hours on this today, the pre-matched holes are just amazing in improving assembly speed, I even took a video!

Just an arty farty shot I took after all the rivets were pulled and t was getting dark by then. 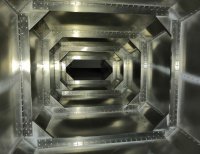 Checked out the dorsal fin/VS today.

Then we'll need a VS. 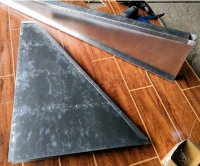 And stuck them together

It looks a bit wavy because I just ran out of rivets and only had a few to stick it together.

Someone PM'd me and asked if I "could loan them $20 as they were desperate for a drink", oh wait, that was BJC's PM, there's another one, let's see, oh here it is:

"Are you going to have rounded leading edge on the VS?" Yes of course, but it will be fitted later on in the build.

The VS looks lots better with a few more rivets in it..

.. and better still sitting in it's proper place ...

Today I grabbed 4 of my 6 meters lengths of 6061 square tube, and pre-drilled the holes in them to start on the front half of the fuse.

I had already lasered and folded a couple of 1 meter long drilling jigs, and away I went ...

.. yes, I deburred them all 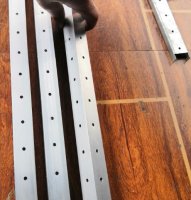 As a few hours dragged on, I thought, what the heck is taking so long?

Dang! That's what took so long! 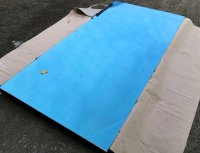 I sorted out the basic roll bar, which is also the front fuse to rear fuse joining frame.

Bit more to go yet, a cross-brace to take seatbelts ect, but had to determine how it fits.

No one is going to trip over their front wheel and end up a paraplegic in my plane. 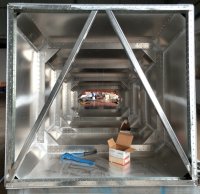 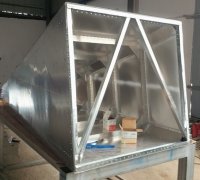 And assembled all the HS ribs today as well. 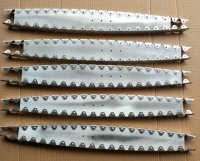 I haven't gone quiet, I have been spending a number of hours sorting out the wings and some other details.

I did get a chance today to make up 4 gussets to aid in the connection of the front fuse to the rear fuse, it will all make sense later on ... 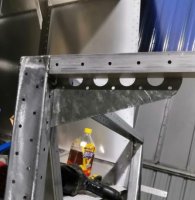 Starting on the front fuselage, cut some sides today and checked on bracing fitment. 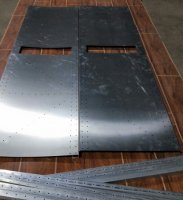 I'm using titanium(IV) oxide as a sealant between surfaces because titanium is strong and light ... 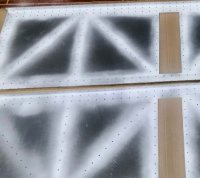 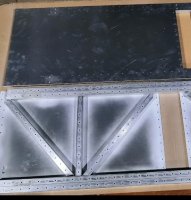 and how the sides got to be ..

I redid the center joining frame/rollbar as I was quite unhappy with it, and kept trying to modify it, so just said enough, and started from scratch again to resolve all the niggling issues.

Very happy with both the result and also lowered weight. 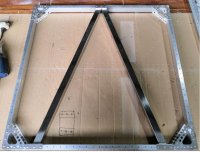 Now that I am happy with that assembly, it allowed me to start looking at attaching the front fuse sides to give me a foundation to work from.

Developing the wing to fuse support and gear mount frames, as well as the inner front fuse skins and gussets were cut and folded too. 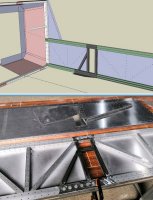 As well as enjoying some festive season activities, having some wing supports welded up, a firewall lasered out, I ordered a 4' x 4' (1200 x 1200) CNC Router that should be in factory within 2 weeks.

It's primary purpose will be to drill the thousands of rivet holes throughout the panels. Recently the laser shop i use has just become too big, going from 1 to now 3 lasers going full time, and making me wait 3, 4 or 5 days now because my jobs are so small relative.

Besides being 10 times cheaper than a laser, it can drill the holes in my tubes that the laser can not. Sure it's slower, but speed isn't an issue at all for me, and 3 or 4 hours is better than 3 or 4 days from the laser shop.

I'm sure some here are interested in a 'cheap' CNC Router, so I'll post progress on that when it gets here. 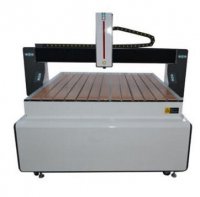 Bob got a firewall made today, and still playing with the wing to fuse supports, a little tweak is needed tomorrow.

Yes there's 2 firewalls, simply because there was room on the sheet lasered rather than wasting it.

Todays's main goal was to test run the horizontal stabiliser's front spar made from a cheap bit of steel before I go cutting up my expensive sheets of 2024.

The spar was no issue, but a couple of rivet holes in the gussets didn't line up, all worked out now, and also a gusset to support the center of the spar to come as well.

Today's task for Bob the plane was to start fitting up the wing/gear support structure, and close it all up with the inner skin.

This will also answer some of the questions some may have had about the tubes role in the forward structure.

All worked out fine, in fact Bob was so happy he did some aerobatics ...

Just a few hours in at the factory today, getting the firewall together.

Those are smears from the titanium oxide sealant, and just general handling btw, not scratches.