Anywayz, this strange looking creature is the joining strip for the 2 flat wraps, and here is the canopy style I am hoping to replicate ..


I'm been sitting here typing for too long and my feet have gone to sleep, I think they are coma-toes ....

This flat wrap is proving to be a headache and a half to join the 2 pieces together.

After a few different iterations, I am now trying for 2 long one piece joiners (one either side of the perspex) with pre matched holes in both the metal and perspex. The joiners must be bent at 45 degrees one end but flat at the other (initially a headache but now resolved), and other design oddities to suit the exponential curve, and of course the inner joiner must line up it's rivet holes while negotiating a smaller radius. However, that radius is exponential and is only for segments 3, 4 and 5, of 6 segments, as segments 1, 2 and 6 are straight.

All worth it if I can get a good looking flat wrap though, and all this work only has to be done once thanks to computers.

There is a local shop that does laser for the perspex, amazing perfect 4mm holes, oddly the protective paper barely gets touched and the plug is still there.

Anyone who has ever scratched or broken perspex can understand why I am taking it out of the hands of newbie builders.

If you think I've been quiet for a bit, well you would be wrong.

Have been working 18 hour days for a few weeks on future infrastructure, I am mentally exhausted, but here is just one of the results gained ...

There's a few adjoining facilities too with the occasional bit of gear ..

For those interested, still chipping away at infrastructure and a few other business foundation issues which is keeing me away from the build at the moment.

However, and for what it's worth, the wings for the upcoming high wing model are now sorted out, so with everything else mostly in place now, resources, materials, tooling etc, after the low wing is finally done the high wing will happen very rapidly after it.

Thanks for some of the private inquiries about my well being and the build.

The reality is in the later 2017, first my father in law died, then my mother died, quite a blow with many trips back and forward to Australia. A Partner investor I had lined up to enter production with lost a bundle in a failed construction project, an electric car distributorship business opportunity came along that has taken off and kept me busy, and that is now generating money that I can use to apply into the plane project's completion. There are other minor factors that came into play that have been sorted out.

All that is coming after the Spring break here.

I have always been self financed in business for the last 30+ years and when money making chances come along like this electric car business, I must take them up.

Thansk for PMs about my health and whereabouts, getting straight to the point, I will be back on the plane project shortly.

You haven't seen me around due to a succession of serious health issues, and a string of bad luck. I have been in hospital more times over the last 18 months than my entire life previously

If you want that in a nutshell, hurt my back July 2018, and just got sick, doctors couldn't find why ... until my mild, non-damaging stroke .... open heart surgery in January, 3 months ago slipped off a boat, body slammed down onto a concrete landing step onto my left rib cage/heart and off to hospital (thankfully I had a lifejacket on and only nearly killed myself), and 7 weeks ago had another major operation below my tailbone to have an abscess removed, 100mm long cut, 50mm deep, open wound recovery. 3 weeks ago I stepped on moss in the rain and went azz over spraining my foot badly and apparently hurting my shoulder.

So besides still not being able to breath properly, sternum in pain daily, can't walk, can't sit down and can't lift my left arm, not that I can lift anything over 15 kgs at the moment anyway, and can't sleep, I FEEL JUST GREAT, sigh.

Anyway, 30 year guarantee on the heart now, about 90% fully recovered though I can't lift heavy things for about a year due to the sternum bone cut and wired together, but i'll get there.

So looking forward to sorting out a few avenues towards completion. 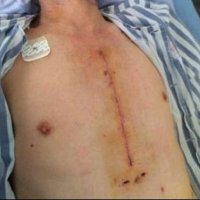 Aluminium arrives tomorrow, like a Kid at Xmas, Yay!

You would be surprised what a difference 60mm longer and 30mm (2.4" X 1.2") wider makes to nesting, spreading parts over 30 or so sheets. That also goes for the actual design, you can't make a part that won't fit onto a sheet, or cut up into at least the minimal part sub lots.

..and of course first thing is to cut a strip and send it of for testing to confirm what it really is.

I did some very simple tests though, yeild, curvature and spring back against previously tested and confirmed 6061T6, and good news that those were identical, but I'll let the Lab decide that. 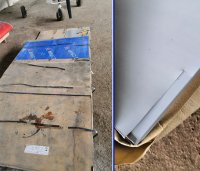 The complete rear fuse, now a few days more to translate it all into 2D CNC files (.dwg or .dfx doesn't matter) and start cutting some sheets later in the week ...

And we'll need a Dorsal Fin and VS as well, which nicely fits onto a sheet ...

I won't draw the skins up until I laser and fold the spars, and assemble with the ribs to get accurate measurements.

Man, been putting some hours in, seen sunrise a couple of times.

I nested the entire Rear Fuse, HS and VS, then I virtually built the entire assembly again in the software to find the small fitting issues, and there were some, mostly rivet holes not lining up, couple of part sizes not change or moved (or not) at some stages.. And when I say build, starting with flat sheets as if they had just been cut. I folded and fitted them all together piece by piece then modified them if required, transposed to flat sheet, fold again and repeat.

There's also the one that used to catch me out a few times years back, and that's creating stuff in 3D as flat material not allowing for the thickness of the material in the real world, and over a few parts, that error can build up quite quickly.

So now tonight I celebrate my first sheet of 6 for the in .DXF file ready to go to the laser and fold shop early next week. I tried hard to fit everything onto 5 sheets, but just couldn't, dang narn it! 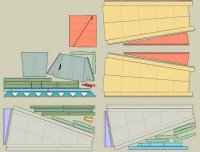 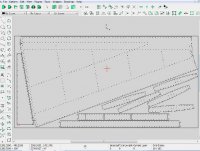 Oh, and have a name for the plane at the moment.


It was a tough one, but I took in the considerations of my Sino -Australia relationship and America being the key market, the plane type, specs, mission suitable for ect and eventually I came up with the perfect fit ...

Almost saw sunrise this morning, but worth it because all CNC Laser files finished (for the rear fuselage stage), and 6 sheets dropped into the Laser shop with the file, should see some parts late tomorrow or Wednesday.

My biggest headache today was getting the protective plastic film off the 6 sheets, dang they don't make life easy!

You see the 4 long rectangular parts that compromise 13 separate parts end to end, and the 8 pyramids at the bottom (that just fit onto the sheet) to be lasered ...

Well the reason they are joined like that instead of individual parts is for accuracy in the folding that they will receive later. Folds are done in a brake press and the longer the part, the less percentage of error over the length.

So each long rectangle, and those 8 pyramids, will be folded together as one piece, then cut apart with the snips, and all the parts will be very close to being identical.

Oh, and the pyramids (gussets) are flipped every 2nd one so i get left and right hand parts automatically after folding.
Last edited: Nov 18, 2019

So Guys, let me introduce to "Bob".

Bob is as simple a plane I could figure from all my experiments and investigations over the last number of years.

Simplicity, cheap to produce, cheap and very fast to build while encompassing strength and safety.

... and it's wide! Australians and Americans have grown somewhat over the decades, many plane manufacturers just don't seem to have kept up with that fact.

One unusual feature with Bob is the staggered cabin to give real world shoulder and arm room to the Pilot and Pax, no more of the upper body 'twist' to avoid rubbing shoulders with your smelly Buddy on the way to grab a hamburger, and somewhere to actually rest your arm.

A further bonus is that the stagger is made up of just 4 components, the armrest, the rear fairing, a small filler panel behind your shoulder, and of course the canopy - all 3 components can be widened or narrowed to suit the owner with considerable ease, either during the build or modified later on.

As you have seen, I build what I show, the complete rear fuselage, VS and HS parts have all been cut and waiting for me to get there, and get them to the fold shop.

Assembly should start in a few days!

PS: Graphics are crappy, if you want better go join a computer CAD group, but for those who want to see a real plane get built, watch this space ...

I'm almost ready to jump in and make engine noises!

Look at all those lovely pre-matched holes ... 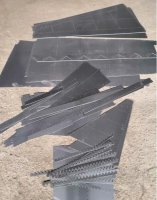 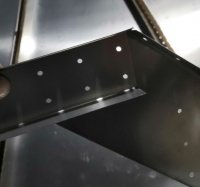 The silver speckly stuff is oil based paint, I think it's a good enough anti-corrosion joint sealant. Silver speckly because it's what I had.

Oh, and I bit the bullet today and ordered some 7075T6 for wing and HS spars.

"Ouch" said my wallet, it ain't cheap, but cheaper than the Titanium I wanted to use, and much cheaper than Carbon Fiber, but fact is I wouldn't know what I was doing with Carbon Fiber anyway, so moot point..

So tomorrow will be a few thousands twists of a drill bit by hand to de-burr, and some trial fit-ups.
Last edited: Nov 22, 2019

Though I only had a few brief moments at the factory today, it's always exciting to install the very first parts ..

Onto another note, I above mentioned I ordered some 7075, well a few people elsewhere popped their heads up and mentioned cracking, corrosion and all other terrifying scenarios that are clearly going to kill baby seals.

Apparently all those thousands of Boeing and Airbus airliners, along with a large percentage of military aircraft around the world that use 7075 and derivatives for their spars, ribs and wing sheets. don't count.

But got me to thinking, heck, I can't beat the Internet and social media, if a couple of people have those thoughts about 7075 spinning around their head, then so do a lot of others out there in Internet'Land, so I reverted the order to 2024T3, just like Cessna,, Vans, Piper etc, etc, etc all use.