All comments toward the subject of "unless you are going north of 200kts yadda yadda yada" have been noted and will be ignored, so you can stop now. This is merely an option. A decision left up to the individual buying and building the kit. Some like it. I intend to provide that option at the lowest weight and simplest design possible. I'm sure I will get the same comments about my flush rivets..... save it. These are all issues that COMBINE to create as low a drag as possible in order to serve the highest cruise possible. Not to mention the "cool" factor, which DOES sell planes...
R

More than happy to stop, and also to ignore further requests for help, as requested.

Wow.... tough crowd. No need to get all "take my football and go home" on me. Just sayin', I'm aware that there is a faction that thinks if you don't hang a 540 on the front, you don't DESERVE to go over 120kts.... something the Sling TSi has proven wrong. I'm not into negativity. I'm into possibilities.

Found this on the YouTubes...
Very similar to what you guys helped me come up with. I wonder what that spring-looking thing is going down and to the right though a hole in the web on the right?

Interestingly, I noticed the wheels don't go all the way into the wing, but have small bubble fairings, I guess due to the thickness of the 6.00x6 tires vs. the thin airfoil. I'm hoping to avoid that by using thinner wheels and tires, but not if they are going to cost 4 times as much as the more common.

Here is a still from "tha dude" that did the Zenith CH650R in Spain. These wheels look more the aspect ratio I'm looking for? Maybe? These look too small for what I am scheming, but the thinness in a 6" wheel tire is what I'm talking about.

Putting retractable LG on a high drag airframe is like Lipstick on a pig. Its still a pig.

Mad MAC said:
How narrow is your track, I would be tempted to move the gear outward and make them swing inward (I guess you pick outward because of the local reinforcement of the walk way).

Mooney is reasonable a trailing link gear with rubber donuts which would be about the right size for this.
Click to expand...

I like having the attach points where they are, as opposed to 40" further out (to swing in instead of out) only from the standpoint of minimizing the moment on the spar attachment. I actually think it looks better for them to swing in.

Pops said:
Putting retractable LG on a high drag airframe is like Lipstick on a pig. Its still a pig.
Click to expand...

Who says my design is high drag?

geosnooker2000 said:
Who says my design is high drag?
Click to expand...

Sorry, I was talking about the Zenith with the RG. I should have made it clear.

Bonanza main leg pretty much what you had designed only with bolt on braces. Very rugged. Retracts in and has a blister on the main door for the hub casting. 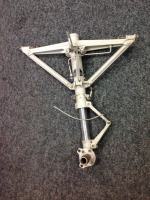 BTW, that CH801 gear from Grove, it is rated for 2400lbs gross. That is the only spring gear that they offer that would cover my design. It weighs 40.3 lbs. I don't know how much more the extra weight for the fuse channel it would attach to would be, but I'm guessing 10-ish? So that's roughly 50lbs of structure and spring gear that would be offset for the weldments this would involve.

Jay Kempf said:
Bonanza main leg pretty much what you had designed only with bolt on braces. Very rugged. Retracts in and has a blister on the main door for the hub casting.
View attachment 111344
Click to expand...

So, I'm confused.... Is the axle rotated 90 degrees? Because I think I see the bolts up top are the pivot point to retract, correct?

geosnooker2000 said:
I wonder what that spring-looking thing is
Click to expand...

retract assist.... original was Johnson bar.....it is are really heavy extension spring 1/8 dia or bigger coil wire.....counteracts the weight of the wheel at a small lever arm

Jay Kempf said:
Bonanza main leg pretty much what you had designed only with bolt on braces. Very rugged. Retracts in and has a blister on the main door for the hub casting.
View attachment 111344
Click to expand...

Is the gear on the T-34 beefier, or did they just use stock Bonanza gear? Seems like those have been proven pretty robust over the years.
L

I've read somewhere, about 7° behind the C of G to center of wheel. That's what I have been using in my design. If your main Spar is C of G it works pretty good for placement. I don't know who it would work for your Retraction arrangement.
George
B

geosnooker2000 said:
So, I'm confused.... Is the axle rotated 90 degrees? Because I think I see the bolts up top are the pivot point to retract, correct?
Click to expand...

Bill-Higdon said:
The Bonanza main gear pivot points are on the Main Spar and the rear spar
Click to expand...

Oh, I misread that to be the front gear. Makes sense now. Thanks!

Pazmany's book on landing gear seems like a good investment for you.

geosnooker2000 said:
So, I'm confused.... Is the axle rotated 90 degrees? Because I think I see the bolts up top are the pivot point to retract, correct?
Click to expand...

Nope, just rotates the whole assembly about an axis parallel to the long axis like you describe for yours.

I know Piper (PA-28) has had problems with this as far as a really hard landing busting up through the top skin of the wing, and I suspect that is also the source of their cracked main spar problem.
Click to expand...

There are nice gentle landings, nothing happens. Then there are landings at sink rates up near design limits, and again not much happens with a Cherokee, the oleo struts suck up a bunch of energy and it either stays on the ground if it was slow enough, or it is flying again.

On a really hard landing, all bets are off, parts fail, stuff gets broken, and the event gets attention from the insurance and FAA.

You are designing this bird. As a Experimental, you get to pick the sink rates your gear will handle, peak g's, stroke, and how to achieve all that. For FAR Part 23 airplanes, the rules have a whole lot to say about all this, and are a really good idea for homebuilts too. Pony up the bucks for Paz' book on gear.

As to the Cherokee spar AD, it is likely that the spar joint at the fuselage is a tad undersized for sucking up huge numbers of hard primary student pilot landings. And that is how the failure occurred. These airplanes were pilot mill birds. Yes, the airframe has to take what flight loads and landing loads dish out. Welcome to airframe design...

All of their landing force is on the main spar. The strut is literally bolted to the top and bottom flanges of the spar (back-side).
My proposal is to divide the load between the main spar and the rear spar. But I would be bolting through the webs, so they would need to be reinforced with doublers.
Click to expand...

Old idea, been around longer than we have, lots of good examples out there.

.... Second question, is it a bad idea to have an actual rear spar carry-through in order to carry some of this landing gear load through the cabin? There is plenty of room under the rear seats.
Click to expand...

If you are hanging any part of the gear on the wing - outboard of the fuselage - loads from the wing (whether from flight or landing) get fed into whatever structure you have at the fuselage. You can either have a drag spar including structures to pick up loads from it in the fuselage, or have a torsion beam main and corresponding carry through in the fuselage plus ways to get that load across the boundary. But you will have to do it someway.

Usually a beefy connection between main spar outboard and main spar inboard is used, and then either a single pin connection at the drag spar or a beefier connection may be used.

....Third question, it sure would be nice to get away with a 5" wide tire in stead of the traditional 6" due to the possibility of retracts. Are there weight restrictions/recommendations to aircraft tires?
Click to expand...

Buy Paz. LOTS of information on tire sizes and specifications, ratings, load vs deflection. Lots of information designs. Seriously, buy it and go through it once for familiarization, second time to know something of the topic.