I did more thinking about the idea, and insulation both thermal and galvanic are needed. So an aluminum radiator leading edge D lined with aerogel might be the ticket to elegant financial ruin, I mean press releases.

So... back to the drama of the quest for flight. I'm already on record advocating not doing both new airframe and new engine development simultaneously, and not even the umpteenth to say so. So... enjoy.

Aesquire said:
So... back to the drama of the quest for flight. I'm already on record advocating not doing both new airframe and new engine development simultaneously, and not even the umpteenth to say so. So... enjoy.
Click to expand...

Especially so with no previous experience in either field... Chances of success in meeting performance goals, weight targets and engine reliability/ durability on the first go- zero.

BBerson said:
I think that is a type of rotary swivel. Various types are used for delivering oil, usually hydraulic oil to a rotating part. I don't know if any turn at 2500 rpm. StackPath
Click to expand...

Yes you are on the right track

Delrin is the Dupont brand name for its acetal plastic. Acetal is a thermoplastic which melts at 337F and should not have a continuous in-service temperature exceeding 185F. See: http://www.sdplastics.com/delrin/delrin[1].pdf

Of course the oil temperatures in the part exceed 185F and the friction heat from the rotating bearing will only add to this temperature. The hotter it gets the worse it will get ultimately melting and failing. A 185F service temperature limit it way too low for this part.

There are numerous machinable thermosetting bearing materials all of which would provide good service in this application, however Delrin is not amongst them.

Its a shame the steel parts were rejected. Its engineering 101 that like materials should NEVER be used in a machine bearing however dissimilar metals would have worked just fine. The solution, had it been designed right in the first place, would have simply been to press in bimetal shaft bearings. 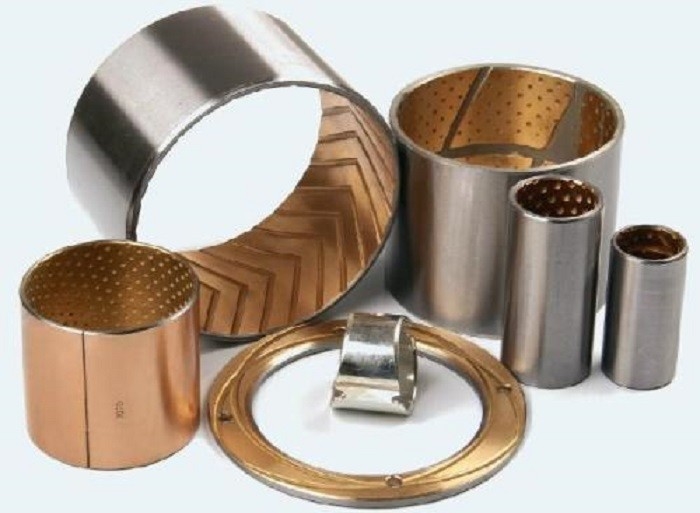 BBerson said:
So Teflon should be acceptable for this purpose? Teflon melts at 621°F.
Click to expand...

Nope. Teflon 'flows' even at room temperature and is not suitable for a machine bearing. Think of it as a slow moving liquid.

flywheel1935 said:
Now here's a thought ???. These mysterious California "Investors" must have been following the Raptors "progress" over the months and years. Yet to date none, ( as far as we are aware ) have influenced PM's often misdiagnosed solutions to problems, he has often self inflicted. So this begs the question, are they actually "Aircraft People" or just more IT geeks who think the GA world mirrors their own environment .Over to you guys/gals.

Rataplan said:
Well Burt Rutan designed the VariEze almost half a century ago. Don't compare Burt with someone who tries to reinvent a half century old design by going against all experience gained in that half century
Click to expand...

Design configuration is older than that ! Pic below is from 1943 timeframe, Miles M39 Libellula ( and there were earlier examples than this, Bleriot model 25 Canard circa 1912). Also Curtiss Ascender, Kyushu Shinden all could be considered the basis for Rutans early efforts These far predated the Varieze and the Libellula predated the Twin EZ, Starship,and Velocity V Twin as well. Looking at all of the 40s era canard planforms cant help but make one question where Burt's, and others, inspiration came from. A very famous RC scale modeler friend of mine once said, regarding design, that it is nearly impossible to come up with a new configuration, everything has pretty much been tried, and that the best you can do is create a prettier version of what already exists. Most ,if not all, of Rutan's and others, including my own, "unusual designs" were all predated by existing similar examples, maybe not as attractive and some maybe more attractive . Look at all the unusual examples the Germans alone generated during WW2, to include asymmetric examples like the " Boomerang" that garnered so much relatively recent attention in the aviation press.

canardlover said:
Design configuration is older than that !
Click to expand...

Yup, the very first one was a canard.

I don't know if you guys have seen this video. Burt explains the incredible BD-5 story from the inside. Very similar to Raptor. The BD-5 performance was assumed to be laminar with incredible speed. The engine and driveline was unworkable. The deposits were refundable... but convertible to non-refundable. And more.
Not saying Raptor copied the business plan because I don't see how anyone beside Burt would know what happened with the BD-5 deposit scheme but eerily similar.

>Sounds like a huge increase in the volume of coolant required, which in itself is going to add a lot of weight. ...If you made the reservoir in the leading edge _very_ thin and also made of metal, then it would be prone to dents and damage, whereas we normally want the leading edge of our wing to be the physically toughest part of the external structure. ..And how are you going to have access to all of those thin and fragile reservoirs for inspection? It would be hard to stop moisture from working its way between them and the skin/structure around them, so corrosion would be something you'd need to always be watching for. You'd really have to make the reservoir structurally integral to the wing.... a clean sheet wing design from the ground up... and making the reservoir structural will add even more weight....

Good points and others added some reasons why the LE radiator is no buneo.

I really like the looks and the size of the Raptor and I imagine that it would be successful...IF...like practically everyone on this forum has suggested...delete the pressurization and that would make the airframe lighter...swap out the Audi for a Diesel horizontally opposed six air cooled, lighten up the airframe...

BJC said:
Yup, the very first one was a canard.

I figured mention of that was not even required. Two brothers by the name of Wright , I believe. Two wrongs don't make a Wright, but two Wrights made a canard ! LOL

Assuming that thing has to be loaded axially to seal it is a joke, Teflon, Delrin, Glass loaded or not. Why are seals molded around metal shells? ?? ???

I had a look at one of his videos the other day, first one for a long time ...

Proverb. the more things change, the more they stay the same. ~ Turbulent changes do not affect reality on a deeper level other than to cement the status quo.

Good to hear from you, Mark!

TarDevil said:
Good to hear from you, Mark!
Click to expand...

You're looking good too, nice shirt.

It's nothing... something I stole from my ex-wife.

TarDevil said:
It's nothing... something I stole from my ex-wife.
Click to expand...

Well that explains the dress and the high heels then.

Jay Kempf said:
Assuming that thing has to be loaded axially to seal it is a joke, Teflon, Delrin, Glass loaded or not. Why are seals molded around metal shells? ?? ???
Click to expand...

Seals for rotating shafts that you want to stay dry on the outside and have little pressure across them are molded over a metal shell for press fit into a bore. Used by the millions in cars and trucks and ag equipment. High pressure hydraulic cylinders and the like use similar seals or just captured preloaded elastomer seals. Again used in the millions for things like power steering, brake calipers and cylinders, etc.

Go inside a sealed chamber, with shaft and sleeves spinning at different speeds, and you can tolerate them leaking, because it just leaks into the bigger housing, and back to the sump. There are several of these in every conventional automatic transmission, and are made by the millions annually. They can have several fluid passes for either lube/cooling of elements or operation of a clutch and each pass has a seal on each side of it. These are typically glass filled Teflon rings cut from a long extruded tube. Sometimes they are scarf cut for ease of install, sometimes the ring is left solid, with diameter about the size as installed, stretched over size for install and the forced down in diameter with a conical sizing tool. The metal parts are kept from touching each other by use of either journal bearings or rolling element bearings, and the seals are axially engaged to effect a seal by the pressure in the pass. They work great, last long, very reliable, most of us own a few because most of us own a conventional automatic transmission that we do not even think about when we use the vehicle.

These seals would work great in this application if they had been used. You turn and grind a bore on the slider with the holes in it for oil passes, and a couple bores for COTS press-in journal bearings at each end. Then you turn the shaft with a groove and drilled holes for each oil pass, a turned and ground groove for a seal on each side of each pass groove, and turn, grind, and polish the journal to run on the bearings. Dimension and tolerance the thing so steel only touches bearings, and so the seals will stand operation pressures.

Unfortunately, that was not what was done in the Raptor, and it seized. I do hope PM runs it awhile on the ground then inspects it before attempting to fly on it.

What type of seals were in the original steel housing?

Billski, nobody was name calling. The subthread was about that giant plastic spool piece that was proposed to be installed to segregate oil from inside to out. The way it is used in the design, my understanding, I could be wrong, is that it is trapped end to end and there is oil pressure inside and outside. Someone suggested that making it out of Teflon might help. I just suggested that using Teflon for that would cold flow or creep. I have lots of experience with teflon lip seals, glass loaded or not, and don't disagree at all that they can be used as lip seals where the lip and housing pressures are designed to keep them in place and help them seal and with the slipperiness of Fluoropolymers it works great. But Teflon as a large structural lump. Not a chance. You load it and it moves. You load it more and it moves more, you load it more and it keeps moving. Used to represent a Plastics company that made Teflon seals and all kinds of other fluoropolymer seal bits and pieces for all kinds of applications. Teflon is a tricky material to those with no experience using it. I've used it a lot.

The Delrin (I think was said) is another story but loaded axially in hot motor oil and on a critical system where failure and catastrophic leaks create all kinds of danger is just irresponsible regardless of what project it's on.

My apologies for pointing that response at you. It was inappropriate. Please accept my apology.

My concern was about how quickly threads on this topic have degenerated to name calling, become PM bashes, etc. I wanted to prevent that negative process from occuring. I did not spot a code violation or I would have deleted the violating post and sent a warning note. None seemed needed, but it did seem we were drifting that way.

On the topic of the rest of the post, yes, I see that we are in agreement. Onward.