A decades long dream of building my own airplane has finally come to fruition!. On November 1st. I did acquire online the constructions plans for my RW19. Some weeks went by studying the plans, doing some research and liaising with HBA fellow members asking for advice. By the end of the month, the construction video package was also ordered. December was fully devoted to prepare the documentation required by the Spanish Civil Aviation Authority in order to grant permission for the homebuilt construction. I wanted to have a clear and positive official statement before starting to buy the wood. More on wood election will follow in incoming posts...
Last edited: Mar 16, 2021

Two weeks ago, I did complete the construction of my working bench. The final dimensions of the bench are 18Ft x 49" with a height of 32". It is important that your construction is sturdy enough to avoid the boards to flex out of true. The size of the resulting bench is long enough to build the airplane, but leaving not much extra clearance. I did my best with the limited available space of my garage, if I had a bigger place, I would have added some extra Ft. 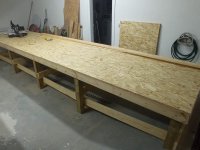 And immediately after finishing the bench, I started drawing the stabilizer and rudder in preparation for the wood to arrive somewhen... 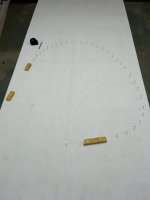 My construction activity has been lately idling, as the lead time to source the required wood has been way longer than I anticipated. Finally I have opted to use Western Hemlock wood, as a local fellow had some surplus he was willing to sell. I have performed several tests to the chosen wood, and the MoR (Module of Rupture) was right in the middle of the values stated in the technical literature (Wood Handbook--Chapter 4--Mechanical Properties of Wood by David W. Green, Jerrold E. Winandy, and David E. Kretschmann). My airplane will thus be slightly stronger than a Sitka built one and hopefully only some 30 pounds heavier, I consider it to be an acceptable trade-off.


This is the clumsy press I assembled in order to test the wood, ugly but functional: 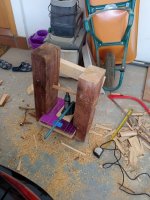 As I will start with the laminated rudder, steaming will be required. I have therefore acquired a steam generator and assembled a steam box (actually a steam tube) by re-purposing some very affordable galvanized chimney sections. The tests I have performed with the assembly, throw very satisfactory results as temperature and humidity remain pretty high during the whole steaming procedure. 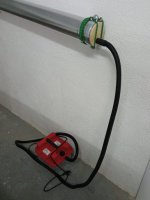 A quick update showing that I have been working on the tail of my plane. I had my doubts whether to post the pictures before or after having tidied up the whole assembly. I have finally opted to show how messy the parts look before being finished in contrast to how beautiful (I hope so...) they will look at the end of the process.

My working pace have been limited by the curing times of the epoxy. The slow process, on the other hand has allowed me to improve my woodworking skills, mainly regarding lamination which has been my first attempt ever. The attached picture shows the vertical stabilizer and the rudder still missing the beef up blocks, as well as gussets and reinforcing plywood. 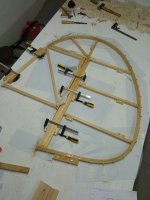 I'm planning to start working next week on the horizontal stabilizer and elevator.

Recently, I have been dealing with the horizontal stabilizer and elevator. The stabilizer is a pretty straight forward construction, requiring mainly to pay special attention to the quality of the joints. I finished the basic frame less gussets in roughly one week. 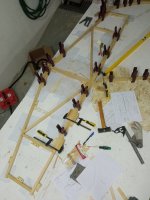 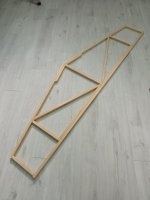 The elevator is quite a different story: compound curved laminations, huge dimensions and the logical requirement for a complete symmetry between the right and left halves. As I am gaining confidence in my construction capabilities, I am also taking more risky approaches. I have decided to build a single jig for only half of the elevator. The idea is to flip the completed half along its Y axis and reuse the same jig for the remaining half. Time will tell if this decision has been a wise one, but if no complications arise I will get a wonderfully symmetrical elevator 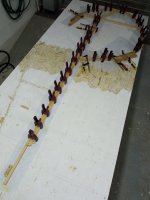 This sharp radius was the main source of my concerns as I feared the outer lamination may splinter, hence extra jig reinforcement was foreseen. It seems it has worked out well as wood shows no sign of damage. 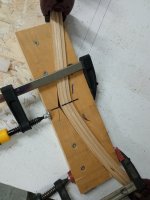 As I haven't updated my log in a while, I will just comment that my approach to flip the elevator and hence having just 1/2 of the required jig construction, has worked out perfectly. There are no flaws in the elevator construction which may be derived from the flip approach ;-)

I still need to attach some small corner blocks on the trim section and do the gusset reinforcements. My next post, hopefully will show all the tail components already finished and varnished. 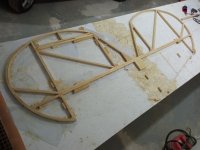 Finally I can consider the tail section as almost finished. I couldn't apply the gussets to the elevator, as I ran out of plywood and the supplier won't deliver my order till mid August. Nonetheless I could complete the vertical & horizontal stabilizers as well as the rudder.

Overall I am satisfied with the achieved quality and I am quite confident, that the parts will look even greater once covered with fabric and painted.

I have finally opted to round the exterior profiles by means of a router bit with a 5/16" radius. I initially doubted between the 5/16" and 1/4", but found that the latter was still leaving too boxy an appearance to the profiles. As you can see, the profiles were rounded before applying the reinforcing gussets. 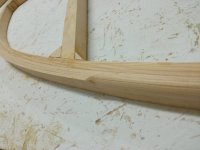 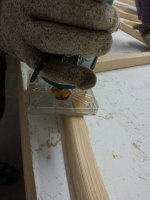 Here you can see the rudder in the process of drying after application of the sealing nitrocellulose lacquer. 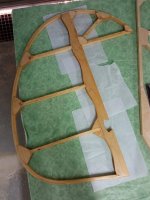 Putting the parts together to check gaps and the overall assembly appearance. 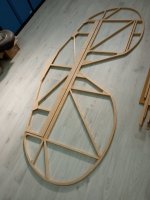 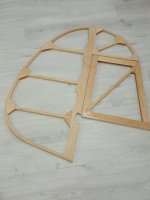 Leaving apart some minor cosmetic corrections that I will address shorty before installing the parts on the fuselage, the only flaw still to be corrected is a not fully straight beam of the horizontal stabilizer. It's flat when lying on a surface, but in the middle of the beam intended to carry the hinges, a slight belly towards the elevator can be observed. As the deviation from perfection ;-) is rather small, I will carefully remove some wood and hopefully this will leave the hinge axis absolutely straight.

Next post should already deal with the construction of the wing ribs...

My forced idle period came finally to an end two weeks ago, when I finally got the plywood I ordered from the Finnish sawmill. I placed my order to a company called Koskisen (Koskisen Group - Koskisen) and I must say that I couldn't be happier with that decision. The plywood is virtually defect free and easy to work with. Moreover, the staff at Koskisen have all been really committed to assist me with my transportation requests in an attempt to keep forwarding costs at bay (the mill is located 2300 miles from my home!). 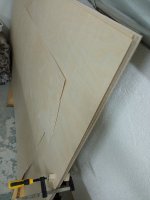 As anticipated, I have pursued my construction with the wings. I need plenty of wing ribs, which for my plane are all identical save the inboard and outboard ones which are blinded with a plywood sheet. That means, that I am almost working like an assembly line operator, cutting template gussets, trimming wood, gluing, etc... It's a tedious work, but somebody had to do it ;-)

Be it as it may, the jig I constructed eases the assembly. You may realize that sensitive areas have been wrapped with wax paper to allow for a somehow easier unmolding (still a pain to free the ribs from the jig though!) 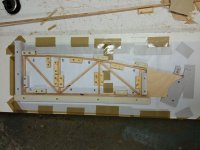 My first two ribs look acceptable to me. The more ribs I will construct, the better they should become. 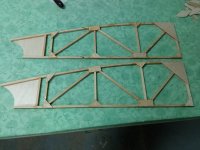