Can the same WAAS GPS receiver serve as the GPS input to an ELT which has a 'GPS Interface', using a coax signal splitter? (I'm assuming it uses coax for that connection)

Since an ELT is "never" used, can it's signal be routed thru the comm antenna, again using a splitter - rather than carrying around an extra antenna forever?

Or, have I totally misunderstood how these work?!? Thank you!
P

The WAAS GPS can provide GPS to an ELT, but not via the antennae. Use the serial-out on the GPS, and the serial-in on the ELT, connected with a twisted and/or shielded pair of wires.
Last edited: Nov 1, 2019
G

Thank you!
(second part of the question) can the comm antenna also serve as the ELT antenna?

Gsport said:
Thank you!
(second part of the question) can the comm antenna also serve as the ELT antenna?
Click to expand...

But it might be nice to have some redundancy in the system. The ELT antenna is, what, just 20 inches of metal rod?
X

+1 on sending resolved position data from WAAS GPS receiver to the ELT.

The difficulty in running the output from a GPS antenna to multiple radios is the GPS and antenna that come with it are usually matched including a preamplifier in the antenna. One antenna per radio here as it would not be matched to the known receiver plus an unknown receiver...

As to splitting signals between radios from one VHF dipole, the splitter halves the power available at each output. That reduces the usable range on the radio to 71% of what it was when connected without a splitter and to one radio. The splitter does this even if the second radio is not on, not connected, or even in the airplane. You will notice that most airplanes that have dual NAV-COMs have two vertically polarized COM antenna plus the ELT antenna, but they usually run only one horizontally polarized NAV antenna with a splitter to feed the radios. There is usually no attempt at pairing the COM radios on one antenna, but I do not recall the physics of why. I do know that it is not a good idea. I do know that most of us want all the range we can get on our COM's. Should you ever be in a remote location with a crunched airplane, you probably want all the range on your ELT you can get too.

Last point - all new ELT's are 406 MHz and so are unlikely to pair with a COM antenna. The old 121.5 MHz ELT's that could be paired on your COM antenna are in forced phase out now.

One problem with using a WAAS GPS for location is the electrical system has to be intact at the emergency. If you had to turn the electrical off or the battery is dead or lost in the crash, it’s not going to help you.

wsimpso1 said:
....There is usually no attempt at pairing the COM radios on one antenna, but I do not recall the physics of why. I do know that it is not a good idea....
Click to expand...

When you transmit on one COM, if they are sharing the same antenna, you will be desensing the other COM receiver. With just a simple splitter part of your transmit power is still coupled back to the other receiver.

There are ways to fix this if the frequencies of the two COMs are widely separated, but these are heavy, big, expensive, and not good handlers of vibration, in addition usable for only one fixed receiver and transmitter frequency at a time. They are called "duplexers", and require quite critical adjustments.

To give you an idea of the size, these things would be about 2 feet tall. 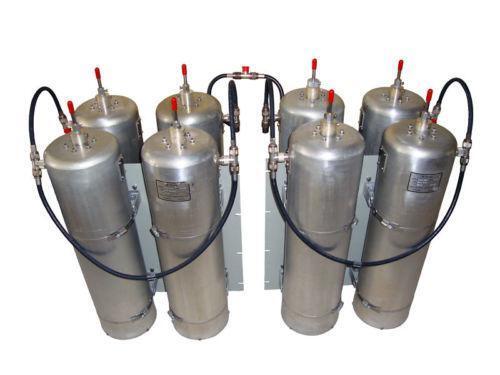