This SkyShark proposal is about as close as any design to my EPPP. There are others:

Russian Tupolev TU-34, a four-seat STOL surveillance airplane with fixed gear (not yet in production).

I will need a bigger fuselage, simply because I need to stuff almost 4000 pounds of batteries in there.

Tony Williams said:
This SkyShark proposal is about as close as any design to my EPP. There are others:

Russian Tupolev TU-34, a four-seat STOL surveillance airplane with fixed gear (not yet in production).

I will need a bigger fuselage, simply because I need to stuff almost 4000 pounds of batteries in there.

What are the American rules for homebuilt aircraft? I'm wondering about max stall speeds and wing loadings.
T

Using the Piaggio Avanti as a guide, the biggest design limitation for EPPP is the wing bending moment with 4200 pounds of batteries in the fuselage.

The MAC will determine how long the fuselage is, based on where the 4200 pounds of batteries are located in the fuselage (fore and aft). 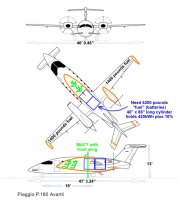 Dan Thomas said:
What are the American rules for homebuilt aircraft? I'm wondering about max stall speeds and wing loadings.
Click to expand...

If it’s an ultralight or sport plane, there are all kinds of rules for weight, max speed, stall speed, etc, but those planes can be flown by somebody with relatively limited pilot experience.

My design is a “big boy” plane that must be flown by a licensed pilot. The rules are intentionally lax to permit experiments, like this. If the plane is over 12,500 pounds, it probably requires two pilots.
Last edited: May 22, 2020
T

Even with substantially more power used for takeoff, the higher energy burn is so short that it doesn’t radically affect the overall range.

I reduced descent speed to 250kts (from 300kts), simply because VNE is 260kts on the Piaggio Avanti. 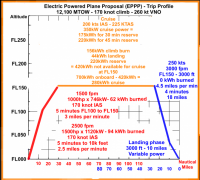 Have Transport Canada or FAA released any information on how to look at Fuel Loads vs Battery Load, if we can actually count a gallon of fuel as volume. The debate still seems to be raging weather we are restricted to fuel by weight or if we can go by volume.

It seems that we may have to seek clarification or some new special class like ultralight but "electralight" or somthing that allows us to experiment with craft specifically needing to carry much heavier fuel loads than traditional aviation.
T

The Tombstone Agency (FAA) will get that right out... maybe 10 years from now.

if I were building a plane limited to 5 gallons of gasoline, I think I would just attempt to meet the spirit of the rule.

Or, call the local FSDO for a ruling on your plane design.
T

There really no advantage to go to FL250, and it’s looking increasingly as if there might be a disadvantage.

The plane could still be capable of FL250, but most logical flying is likely in the “teens”. 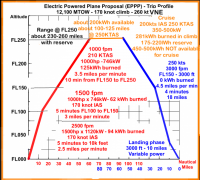 There are plenty of times when the winds and or weather are much better at FL 250 than 150.

BJC said:
There are plenty of times when the winds and or weather are much better at FL 250 than 150.
BJC
Click to expand...

How come I always have a headwind both ways? ;-) Yes, definitely want the operational option to top weather, get out of icing, or to just take advantage of a tailwind.

Tony Williams said:
Using the Piaggio Avanti as a guide, the biggest design limitation for EPPP is the wing bending moment with 4200 pounds of batteries in the fuselage.
Click to expand...

Why not spread the battery weight out some? Have you considered using big nacelles to carry a good number of your required cells and spread the load out more along the wing?
T

Tiger Tim said:
Why not spread the battery weight out some? Have you considered using big nacelles to carry a good number of your required cells and spread the load out more along the wing?
Click to expand...

But, the wing “weights out” before it “cubes out”. In each gallon of space, I can physically fit 72 cells, which is:

So, within a 210 gallon wing, if I go over the design weight limit, I can install:

Even in the best case scenario, with maybe 250 kWh in each wing, that still leaves about 2000 pounds of battery cells required in the fuselage.

So, back to the (somewhat) original premise with revised numbers:

At 12,100 pounds, all landings are overweight from the original design. If the fuselage can’t be built within 3600 pounds, there are two choices:

The good news is that by using the actual Piaggio Avanti airframe, and using similar takeoff power, we can very accurately estimate the performance. The EPPP will be even more aerodynamic:

* I could probably climb this thing to FL410, to set a record for altitude, too
T

I think that I can get to FL410 in 30 minutes, and have enough energy to almost be legal for energy reserve. 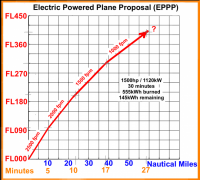 Don't forget cooling drag. It will have to a high degree of control to prevent overcooling of the batteries & multiply radiators to improve robustiness of the battery packs cooling system.
T

Mad MAC said:
Don't forget cooling drag. It will have to a high degree of control to prevent overcooling of the batteries & multiply radiators to improve robustness of the battery packs cooling system.
Click to expand...

The motors have a more conventional and simple cooling system, much like any gasoline motor. Conventional radiators large enough to dissipate several percent of 1500hp on a 50C day would be required. Let's say the motors and inverters are 95% efficient, then 75hp of heat (190,832 BTU) needs to be exchanged. I tried playing with an online calculator to determine how much air that required in the worst case scenario, but the reality is that the drag is highly variable from takeoff (need a lot), to very little at cruise (very cold outside air doesn't require much of that air). Virtually no drag from cooling is needed on descent to landing.

The batteries are not horribly difficult to heat or cool, except when being charged quickly. Cooling the battery while undergoing quick charging (at a 1C+ charge rate) would require an off-board cooling system that's built into the charger. A heat exchanger would be on the plane, to permit the liquid cooling from the charger to interact with the aircraft, but not share fluid.

The heat pumps will provide all the battery cooling in the climb until the outside air temperature is low enough to be useful for cell cooling.

Generally, we want the "energy" cells about 50C maximum for charging, on the ramp and during the climb. Air temperature and radiant heat can easily exceed 50C in many parts of the world.

"Power" cells can go up to a higher temperature, maybe 70C, but they have lower energy density.

Heating the cells requires no air circulation (or drag). A simple resistance heater, or a combination with heat pumps would work.

Might need to heat the batteries at high flight levels.
T

Yes, the cells need to be in the 20C up to 50C temperature for optimum performance. But, with 7000 pounds of densely packed mass heated up relatively quickly at a continuous 1X to 1.6X discharge rate (700-1120kW climb power with 700kWh battery), PLUS only one hour or less in cruise, it won’t take much heat, if any. Probably heating is required on the descent from -30C ambient air, so that the batteries are optimum for any go-around.

Rather than dumping all the waste heat to the atmosphere on the climb, the heated coolant for the motor / inverter / gearbox oil could be stored in an insulated container that will retain a significant amount of heat for the battery cells on the descent. The two separate systems, battery temperature management and motor assembly cooling management will never share the same coolant (there likely will never be a time to heat the motor, even in descent).

The most likely cell heating requirement will be prior to start-up for a cold soaked airplane, where power can be used from the “shoreline” instead of the batteries for pre-heating. Plus, ideally, the cells are fully charged just before departure, which tends to heat them up.

Storage is best with cells left at 30-50% and cold. In super hot hangars, it would be wise to always have the plane plugged in on the ground to run the battery temperature management system (TMS).

Heating will be required on the leading edge of the heat exchanger air intakes, and probably the exchangers themselves.
Last edited: May 24, 2020
T

I wonder if I need much, if any motor assembly heat exchangers, since I can use the glycol from the motor and inverters to heat the air intakes to the air inlets for battery cell heat exchangers, plus heat the wing/stab leading edges, and even auxiliary cabin heat.