So, first flight this morning I did with CG at 30.7%. Perfect day with no wind at all. Rotation was pretty heavy on the stick with forward CG but after that everything went back to normal. Level flight was like on rails. Didn't pool to the right or left and hold trimmed altitude rock solid. Airplane was flying hands-free!!! GPS speed test 4-direction at 3000 ft was 87 MPH at 5400 RPM. I found myself thinking that I really like my little flying machine. Sure, would be nice to get a little faster, but when airplane flies perfect like that, then you start thinking that all it needs really only drag reduction with engine cowling and so on.

So, I landed, removed 45 lb from the front and went for 2nd flight with CG at about 34.4%. Nose was much lighter during rotation, but immediately during climb I was sensing difficulty trimming for same speed. It feels like pretty windy day with updrafts and downdrafts and you end up compensating with stick all the time to make airplane to do what you want. Level flight was not any different. No more hands-free anymore. Absolutely impossible to trim for altitude hold and constant speed. Airplane starts ballooning up for 5-6 seconds by 300 feet which resulting in dropping RPM. Then by itself starts descending with engine RPM going into red zone for another 300 feet or so. In addition to that if you don't compensate with your hand it will drop the wing and start entering into spiral. GPS speed test was much harder to do and as far as I can tell speed stays the same.

I made a conclusion that I will be flying with ballast and removing it every time if I end up going with a passenger.


Question I have, is why CG movement by only 3-4% have such a dramatic effect? Is this because my horizontal tail to small? 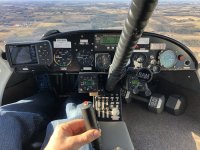 In the photo, it looks like the weights are not securely fastened in place.

Please fly only with the weights securely fastened in place.

Yes, I will need to find better way, easy removable and locking in place ballast. Thank you!
T

The closer you get to the neutral point the more sensitive it will get. Sounds like you are on the verge of tail heavy. Percent of CG is design dependent. Forward CG for the Wittman Tailwind is 17% if memory is close. Good CG range is where you can fly by yourself, OK and then add a passenger, OK. You may like the way it handles; it’s what aerobatic pilots do when setting up their planes. If you do plan to fly ballasted, it does need to be solidly locked down for many reasons. I do have a friend who ballasts his RV8 to make it not nose heavy.

Not sure if ballast will be my long term solution. I will probably do 2° positive wing swept next winter. I did this ones before when I was removing negative swept last winter. CG moved forward by 1.5% and airplane was flying much better after that. So, I can do it again.

Here is picture from this morning with CG at 30.7%.

Here is another attempt to increase horizontal tail effectiveness with very little improvement. CG during test flight with 50 lb. ballast was at about 32%. 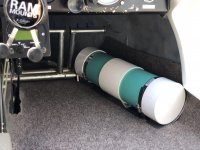 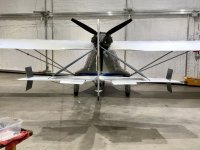 You keep adding weight to the tail, a little weight way back there is worth lots of ballast up front. Might want to rethink the whole tail thing and work on the weight and balance thing.

Your ballast could be less if it was farther forward, and there was less tail weight.

Weight on the tail can be compensated with positive wing wing swept. On this airplane 1°positive swept = 2% CG shift forward. It's not a problem. For experiment sake ballast can be used to get CG in to safe zone ~28 - 32% or so.

Problem is to determine what to do to tail, that is simply to small for the job.

Eugene said:
Weight on the tail can be compensated with positive wing wing swept. On this airplane 1°positive swept = 2% CG shift forward. It's not a problem. For experiment sake ballast can be used to get CG in to safe zone ~28 - 32% or so.

Problem is to determine what to do to tail, that is simply to small for the job.
Click to expand...

have you tried the original tail with 25-30% CG?....I would think extending/enlarging the cockpit to allow single pilot to move forward the 24" required might be easier than sweeping the wings forward. That way moving the seat back for two people will be easy

Why are the vertical plates installed? Was there a directional stability issue?

Okay, since nothing really worked, I will remove everything that I did and reinstall cables just like original design. This time around I am planing to increase horizontal tail by 20% by installing simple aluminum 4" wide extension.

Vertical plates installed on Seamax as well. It was someone's recommendation , that didn't do anything for me.

From Peter Garrison - " The flow over the aft portion of the fuselage is separated. This has the effect of immersing the stabilizer in a turbulent wake and reduces its effectiveness."


Looking at this statement I am thinking that my 20% area increase for horizontal tail should be done with increasing its span. Like on picture below. Reason my diagonal wings didn't do much, because they were positioned right in the middle of turbulent wake.

All new stab and elevator will be made of coarse. I am not increasing span of the old tail. Don't worry.

Here is correct position for horizontal tail on pusher aircraft

All done and ready for test flight. Will do weight and balance before I go. Total additional weight is about 6 lb. About 2 lb less then my composite diagonal wings. 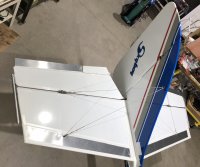 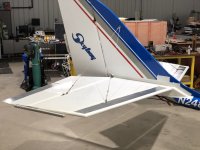 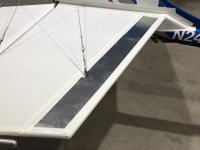 I have not had time to read the whole 40 pages, but how is your prop? If you can reach max RPM sitting still on the ground then its WAY too low of an angle.

The prop should be set to an angle that bogs the motor when sitting still, it should not be able to reach full RPM unless the aircraft is moving at takeoff speed or more.

Years ago with my Cessna I did this and was astonished to find that it improved my climb and top speed by around 15 knots. Was hitting 136 knots and climbing around 90. I would take off and fly at 500 feet until it reached full RPM and then pull up to climb further. With the engine at full RPM and high pitch prop the thing performed FAR better. And I did not notice any real issues with takeoff. It had slightly slower roll at the beginning, but acceleration after RPM increased was much better and made up for it.

If the pitch is too low the engine hits max RPM at much too low speed. It wastes the power.

Did you re-balance the elevators?

Recommendation for 912 engine from Rotax community is to get to your normal altitude and have WOT at 5600-5650 rpm in level flight. This is how they recommend to set your propeller. And this is what I did.

BJC said:
Did you re-balance the elevators?

Eugene said:
Recommendation for 912 engine from Rotax community is to get to your normal altitude and have WOT at 5600-5650 rpm in level flight. This is how they recommend to set your propeller. And this is what I did.

Okay, this is 100% your problem with top speed then. I'm not sure why they told you that but it's not accurate.

Using that technique it is not possible to know if your pitch is high enough. You can be well below the proper setting and not even know.

If it can reach full RPM while sitting still the prop pitch is too low and it will greatly reduce your top speed.

It should slightly bog down while sitting completely still, but free up as you start moving.

Try it. You will not be disappointed. 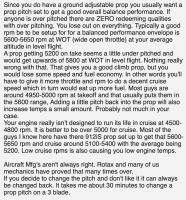