Rik- said:
Where is everyone purchasing their "used" avionics" from?
Click to expand...

VAF, of course. Many of them will redo an instrument panel as soon as the next new shiny object is released.

I have plenty of hand me downs populating my panel, courtesy of the "need to be first" crowd.

Toobuilder said:
VAF, of course. Many of them will redo an instrument panel as soon as the next new shiny object is released.

I have plenty of "hand me downs" populating my panel, courtesy of the "need to be first" crowd.
Click to expand...

Thanks, one of the planes I looked at last month has zip for a panel and zip for anything modern.

I was told that the Uavonix echoUAT will work with nearly any transponder but the one in this project is OLD... Something newer, easier or better is always good.
S

I saw this DIY Mode C transponder awhile back. Has anyone put it together? There probably are legal issues

SamP said:
I saw this DIY Mode C transponder awhile back. Has anyone put it together? There probably are legal issues

Very interesting work. RF work to me is a bit like black magic. This guy is making some very interesting stuff. Thank you very much for the link, Sam.

FinnFlyer said:
You shouldn't need a serial to gray encoder with the GTX327.

I'm not sure what that neon green tube is for, but having it rub against the metal cutout it's routed through does not install much confidence in its longevity.

CAVU Mark said:
Garmin 327 with uAvionix SKYFix and the box. Only needed to install the GPS antenna on top and the stick and ball on the belly. Now I have IN/OUT with no wires hanging around. Sound installation.
Click to expand...

I know this thread is a little long in the tooth but I finally picked up enough cans from the side of the road to afford a uAvionix echoUAT+SkyFYX-EXT bundle: 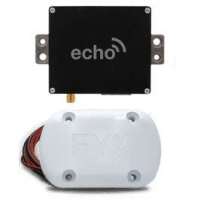 I'm currently running a Garmin 320A transponder (certification was due & completed this month). This should be a simple install with the GPS antenna on the top and the Echo UAT antenna on the belly. Part of what I had to find out was the cable from the Echo unit to the lower antenna is not provided. I ordered a 3' RG400 Silver Plated SMA Male to BNC Male coax Cable. I haven't received the package yet but I understand it comes with a short SMA male to BNC female connector (same as on the UAT antenna) so if you use that cable you would need a coax with both ends as a male BNC. My thought was that buying one cable with the SMA male & BNC male I would eliminate one connection and perhaps save a little weight. I may video the install as there isn't a lot of information to be found on the SkyFYX-EXT mounting when used as part of this bundle.
Last edited: Dec 1, 2020

What'd it cost you all-up, Dale?

SamP said:
I saw this DIY Mode C transponder awhile back. Has anyone put it together? There probably are legal issues

In the US a mode A/C transponder has to meet environmental and performance standards of
TSO-C47c.
Other than that, the electronic test equipment to build and test will likely exceed the cost of several transponders.
I have no idea what language they speak in Slovenia (Slovene maybe?) so just reading the plans would likely be a showstopper for me.

We're doing the install this weekend so obviously I don't have an installed price.

The Garmin 320A transponder and encoder unit (which just passed its two year certification) was gifted to me by a good friend that took it out of his Rockwell Commander and gave it to me. Even more than that he made the harness for me as I eliminated a lot of weight by not using the tray that came with it. He is very good at electronics having once worked at a high level position doing such.

The UAVIONIX Bundle EchoUAT with SKYFYX-EXT all in one receiver unit is sold most places for $1399.00. Adventure Pilot (iFly GPS folks) had a sale for $50.00 off. I also bought a single coax to go from the Echo unit to the UAT antenna for 19.79 & tax but no shipping. So at the end of the day I should get it done for ~ $1375.00. That's still good money in my part of the economy but being experimental beats the daylights out of adding ADSB to a certified aircraft.

Nice thing about the Echo unit is that it broadcast both frequencies via Wi-Fi to the iFly 740b for traffic and weather allowing me to remove the Stratux unit I use now. I actually might lose a few grams of weight in the swap. Not sure exactly where these parts are going on the airplane just yet ...