I’m more curious about the engine selection than strut vs cantilever or tandem vs side by side.

Can’t you pretty well make your own choice of engine since it’s going to be a kit and experimental??
Last edited: Jul 30, 2021

Pilot-34 said:
Can’t you pretty well make your own choice of engineer since it’s going to be a kit and experimental??
Click to expand...

Assuming you meant, "engine," not "engineer." Of course the builder could install anything he or she wanted, as long as it wasn't ELSA. But the kits are likely to be delivered for installing a given model/class of engine...if you install something else, you've got to do all the design work and troubleshooting yourself. Van's strongly recommends people don't switch engines.

Besides, I think Byron's comment was more pointed at trying to gain some insight into what class of airplane it's going to be. If Van's is using a Rotax 912, it's a two-seat airplane, relatively small, and it's intended to compete with Zenair. If it's using an O-540, it's quite possibly a four-seater like the Bearhawk. Something intermediate points at a Carbon Cub fighter.

pilot103 said:
if it doesnt have struts where do you tie the moose?
Click to expand...

Are we making predictions?

Put me down for all metal, two seat side-by-each, single strut braced and untapered wings, designed around an O-320 or O-360. Almost certainly tailwheel and trike landing gear options. The low-speed end will be taken care of by a well thought out airfoil choice, VGs, and reasonably long span flaps, nothing exotic. Generally I don’t expect a world beater in any respect but competent in all, and I suspect two seats is the place to start so that they can later up-sell happy customers a four seater if this one’s successful.
D

That said, it will be fun to see if I'm right about any of this.
Click to expand...

Every back country pilot I talk to is trying to figure out how to get more power out of the engine they have. I think the 912/915 option would be starting at a disadvantage. That's why Just Aircraft has a big engine option now.

Maybe, and it could make a lot of folks happy. Such a plane would be an aluminum Glasair Sportsman, and like that plane it could have a lot of utility and versatility.
Last edited: Jul 30, 2021

A majority of Van's 10 million customers are familiar with the Lycoming engines, prefer them, have flown with them, and may have one lying around because of a damaged RV-X. That will be on their mind in all likelihood.

Victor Bravo said:
A majority of Van's 10 million customers are familiar with the Lycoming engines, prefer them, have flown with them, and may have one lying around because of a damaged RV-X. That will be on their mind in all likelihood.
Click to expand...

Here's the breakdown of engines installed on Van's aircraft, as of 1 January this year.
This includes both EAB and SLSA/ELSA RV-12s.

I believe five of the first six groups listed fit into the general "Lycoming" category.

Whoa, whoa, whoa, one RV has a Fairchild??!!. Who else needs pics of this Ranger RV?

Tiger Tim said:
Whoa, whoa, whoa, one RV has a Fairchild??!!. Who else needs pics of this Ranger RV?
Click to expand...

However, looking at the picture, it's obviously not a VANS RV-4....

BoKu said:
What we saw in the proto shop then never came to fruition. I can't tell you about it, but I can say they are not afraid to try out interesting offshoot developments, and not afraid to abandon them if they don't look to pan out.
Click to expand...

Amen to that. You ought to drop by our R & D facility in Fort Worth sometime...

Victor Bravo said:
Maybe also look at this from the design engineer's perspective for a second, and think what airplane doesn't exist in the marketplace (or is not easily available), but would serve a useful purpose.

Something that can get in and out of the back country at reasonably short strips (500-700 ft), but also has enough speed and range to go further/faster without having to stop for fuel as often. And something that is more fun to fly than the majority of existing STOL airplanes. But something built out of sheet metal because not everyone loves fabric or wants to be terrified of every thorny bush.

The best airplane that meets the first three requirements is the Bearhawk. It's cleaner and faster than many others, it can operate out of a fairly short strip, and it can go a fair distance. It also handles significantly better than some other bush type aircraft. So if you made a sheet metal equivalent of a Bearhawk, you'd have something fairly desirable to a good number of people.
Click to expand...

Wasn't there a guy named Murphy doing this sort of thing?

For 35 years, Murphy Aircraft Mfg Ltd of Chilliwack, British Columbia, Canada has manufactured and sold aircraft kits for pilots across the world. We offer a wide variety of lightweight airplanes that are capable of operating from wheels, f 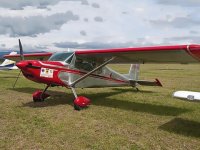 I don't believe that could be called a new product announcement.
R

Maybe we can simplify this down to a basic binary of target market. Will Van's go after the Cub market, or the Sportsman market? I think both are viable assumptions and, truth be told, I think they likely have desires to go after both. So, maybe the proper frame of reference is to consider which one they are more likely to pursue first.

A two seat aluminum Cub-like competitor would be a simpler and less expensive project on which to learn how to tackle a high wing bush-plane. This makes doing the smaller plane first more attractive to the engineers. However, larger planes have more market potential and that makes them attractive to the sales department. It is likely that I biased my decision to the small plane because I'm and engineer with little sense for marketing.

Whatever it ends up being powered with, I hope its an engine I dont want/need in the future. The Lyc 540 "was" the best bang for the buck in aviation until the RV-10 came out. On the used market, the 540 was often significantly cheaper than a comparable 360 - no more!

I *knew* this thread was familiar. We'd discussed it about 18 months ago.

There's just nothing out there in a high wing aircraft that's comparable to Van's in performance and ease of construction. Just no market for such an animal?

Here's a sketch I put together at that time, showing how traditional RV design elements could be used in a high-wing design. 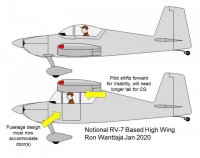 Of course, if Van's is partnering with an existing design, this is moot....