I need to ask a question to any of the folks who know about the SINGLE SEAT derivatives of the Avid Flyer and Kitfox and all their offspring.

1) Dean Wilson designed a fantastic wing folding mechanism (probably based on the DH Puss Moth) for the original 2 seat Avid Flyer. Everybody else used it too, Kitfox, Highlander, Eurofox, etc. But, the fore-aft distance (chordwise) between the rear spar pivot pin and the actual trailing edge of the wing (something like 18-20 inches it looks like) determined the minimum fuselage width. If the fuselage was narrower, the trailing edges of the wings would hit each other when you folded the wings rearward.

2) Then the single seat variants came out... Avid Champion, Kitfox Lite, Ridge Runner, ad nauseam. These airplanes had much narrower fuselages than the 2 seaters. So if they re-used the stock Avid style wing as-is, the flaperons would smack each other before the wings were folded fully.

3) Looking at online photos, I can see that some companies solved this problem by using traditional wing flaps of .25 chord, which could be swung down 90 degrees, thus making the pivot-to-TE distance much smaller, allowing a much narrower fuselage. That's fine, good thinking, but you lose some of the benefits of the external Junkers style flaperons.

4) But I have still seen some photos of some single seat Avid derivatives where they still have the external flaperons, and they still use the rearward Dean Wilson / DeHavilland wing fold.

My question for the HBA brain trust is this: HOW do these aircraft have narrow (single seat) fuselages, AND the external Junkers flaperons, AND the full rearward wing fold? I cannot find a good explanation for this, and I can't easily find photos or information that shows a clean close-up view of how this is mechanically possible without the trailing edge and/or flaperons interfering with each other.

5) Now the big question all of you are agonizing over... why does this (!*#$& moron want to know the answer to this esoteric and idiotic question ? Because I am getting a set of Kitfox 2 wings, and I want to build a narrow (A-plane, Ranger, Aero-Max) single seat fuselage for them. AND... I would really really prefer to use the wing fold mechanism that is already there and functional.... AND I don't want to cut the trailing edge off of the wing all the way to the rear spar and design/build plain flaps.... AND I don't want to have to build and install a different folding mechanism on top of or next to what hs already been put there, modify the attach fittings, etc. etc. yada yada.

So HOW do the narrow single seat airplanes with external flaperons fold their wings without interference?
Last edited: Jul 29, 2019

This may or may not be helpful. I bought a set of cabane/ cub style gear for my kitfox from a guy named Stace Schrader who operates Rocky Mountain Wings producer of the ridgerunner line of aircraft. The ridgerunner doesn't have the flaperons so looking at pics of it won't be helpful, but Stace was I believe a factory demo pilot for kitfox in the 80's and he knows a lot about them. It's possible he might have the answer to your question. Be warned though he likes to talk. Contact info on site below.

Victor Bravo said:
So HOW do the narrow single seat airplanes with external flaperons fold their wings without interference?
Click to expand...

This pic may help? Looks like the junkers are disconnected and folded up. 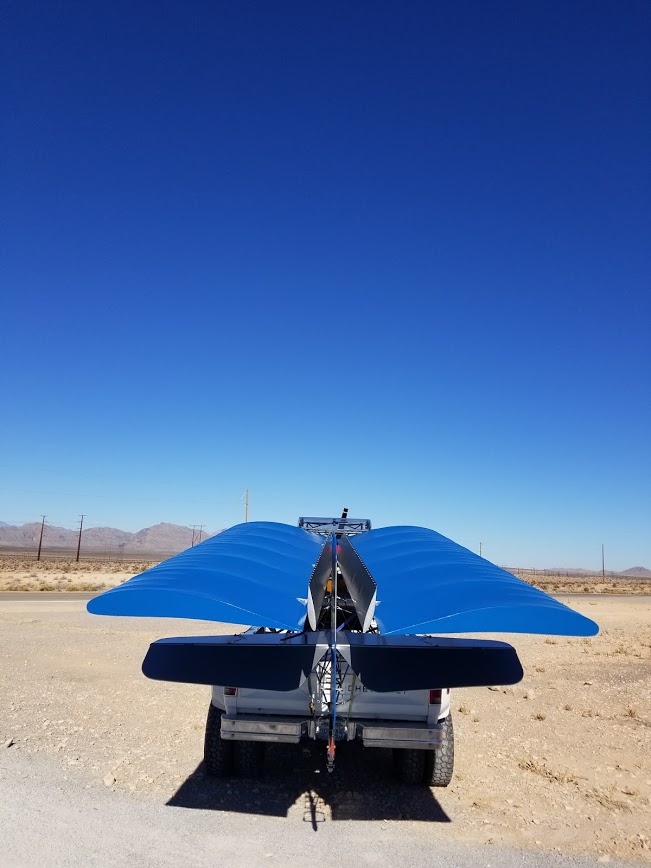 I have seen a million pictures like that one on google images, but they do not show the actual folding mechanism and tell me how it can allow the narrower fuselage to exist using the same wing folding method.

The 2 seat Kitfox wings (and all of its ilk) have a spacing of just about 27 inches between the spar tubes, and something like 18-20 inches from the rear spar tube to the trailing edge of the airfoil (with the flaperons REMOVED and not involved). This means the fuselage cannot be any narrower than double that distance.

I'm guessing after watching this video that the secret is narrower chord on the wings. The folding mechanism is exactly the same as my model 1 kitfox just smaller wings.

My question for the HBA brain trust is this: HOW do these aircraft have narrow (single seat) fuselages, AND the external Junkers flaperons, AND the full rearward wing fold? [/QUOTE]

Based on this video:
And the one above:

My model one came with an empty weight of 463 lbs and a max gross of 850lbs. Why would a plane with a max empty weight of 254 lbs and a max gross of probably less than 550lbs have the same size wing? The flaperons on the belite interestingly enough have a greater chord length but I'm confident after having watched that video that there's no magic. Just a smaller wing. The kitfox flaperons all fold up 90 deg just like the video I posted. The linkage on my bird is such that you don't have to disconnect them to fold them though. It would probably only take shortening the chord by 2" on each wing to get them to fit a 24" wide fuselage. Unless you used software that can accurately measure stuff like that i doubt you can tell that difference just by watching a video.

Even if the wing has exactly the same chord ultralights tend to have thicker more highly cambered airfoils which would give the depth needed in the wing to move the spar back far enough to allow a narrower fuselage.
Last edited: Jul 30, 2019
T

They are not the same wing , just looking at specs. There is 40 + square feet difference from single to two. If I was to make it a single seat fold up tight, I would probably make the hinge mounts have offset hinge lines so when they fold back, they would stack. One go high, one go low. You also have to have rear of the cabin clear, so you have to have it trail off or notch to accept the rear spar/aileron overhang.

VB requested to know how the narrower versions folded the wings

Answer: exactly the same as the 2 seaters

VB asked how they managed that. Implicit in the question was the assumption that at minimum the dimension from the middle of the aft spar was the same.

VB wants to know how to make his kitfox model 2 wings to fold narrower than with a 27" spar inbetween.

Answer:
Not very easily. Though i would add that a 27" wide fuselage is nice and roomy.
T

The simplest would be to make the carry throughs overhead as wide as the two seater.

Victor Bravo said:
I need to ask a question to any of the folks who know about the SINGLE SEAT derivatives of the Avid Flyer and Kitfox and all their offspring.

1) Dean Wilson designed a fantastic wing folding mechanism (probably based on the DH Puss Moth) for the original 2 seat Avid Flyer. Everybody else used it too, Kitfox, Highlander, Eurofox, etc.

My question for the HBA brain trust is this: HOW do these aircraft have narrow (single seat) fuselages, AND the external Junkers flaperons, AND the full rearward wing fold?

So HOW do the narrow single seat airplanes with external flaperons fold their wings without interference?
Click to expand...

Dean Wilson designed the Avid Flyer (from his experience with Piper Cubs, etc.) and Dan Denny was "marketing". Dean wanted it functional and Dan wanted it pretty. So Dan took a fuselage and voila...Kitfox. Dean is an amazing guy. Dan got stuff done, too. I'm not knocking anyone here.

Kenny Scraeder worked for both Kitfox and Avid (at one point they were both in Caldwell Idaho). When Avid was starting to falter, Kenny asked me about helping him design an ultralight based on the Avid, but with standard flaps and ailerons (not a big fan of the adverse yaw with the flaperons). This became the Flying K Sky Raider.

If I remember right, dropping the flaps (they could overlap) allowed the wings to fold back, but not completely parallel, which it did not need to do. Sorry, I don't remember how the flaperon mechanism worked. Along with friend of mine we had concocted a modification to add differential to the mechanism. I don't think it was ever built.

Later, Stace joined the business once it got going. I helped with some calculations, but it was mainly them. After awhile, Kenny and Stace argued so Stace started Rocky Mountain Wings (Ridge Runner). I think part of the argument was Kenny selling the fuselage to Kitfox for the Kitfox Lite.

Not long after, Kenny died chasing a coyote at low level. I think using a larger engine than the original design with too forward of cg and not enough tail authority contributed. That was a bad day. Really liked their dad, Ed Schraeder.

I think Troy of Just Aircraft was Kenny's friend.

The spacing between front and rear spars is about 27 inches, depicted by B in this drawing (of an Avid Flyer). B has nothing to do with the wing folding.

The Critical dimension I am looking at is dimension A, which is the distance between the rear spar (which pivots on the green circle in the drawing) and the trailing edge of the main wing .

I am trying to find out whether dimension A is significantly less on the single seat Avid/Kitfox/Belite/Ridge Runner type airplanes than it is on the two seat versions like the one shown in this drawing.

If this dimension is a lot less, it explains how the wings fold on a narrower fuselage, but I do remember hearing or reading that both the two seat and single seat Avid derivatives used the same wing ribs, spars, chord dimension, and spar placement within the chord.

The reason again is that I am trying to lay out a narrow fuselage for an existing set of Kitfox 2 wings. 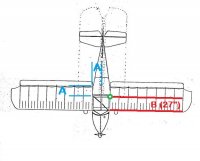 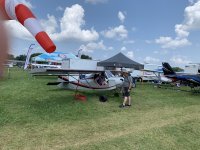 I think you are holding on for some magic when you really know the wings have nothing in common except location of factory and design thoughts. Now if you just have to know exact numbers, call Badland Aircraft. They are making the Kitfox Lite. They have some agreement with Belite who owns the design rights now.

The original placement of the spars was to have equal loading and had nothing to do with the wing fold. From friends I heard that early in the design, Dean Wilson could not figure out how to fold the wings without disconnecting the ailerons (fear from previous glider experiences if I remember) so he threw the plans in the trash. Later he figured out how to do it. Luckily his wife had rescued the plans after he tossed them.

I saw some of the original plans to the Mark IV sketched on the back of a McDonald's tray paper.

Check out wgat Kolb does with their control surfaces, starting @ 2:45


I'm using a similar method for mine.
D

TFF said:
View attachment 87295 I think you are holding on for some magic when you really know the wings have nothing in common except location of factory and design thoughts. Now if you just have to know exact numbers, call Badland Aircraft. They are making the Kitfox Lite. They have some agreement with Belite who owns the design rights now.
Click to expand...

Deuelly, can you please tell me what the distance is between the center of the rear spar (pivot bolt) and the trailing edge of the wing (with the flaperons rotated out of the way)?
You must log in or register to reply here.
Share:
Facebook Twitter Reddit Pinterest Tumblr WhatsApp Email Link