Here are some very useful comments and a graph from MIT professor Mark Drela shared on an RC aircraft forum back in 2005. These issues come up a lot her at HBA, especially when discussing tandem and canard designs, so since this content was raised in another thread I thought I'd put it here for future reference. The title of the thread was "CG vs Airfoil" and I have only copied Drela's posts, his graph, and the related embedded quotes (in italics).

Quote: BMatthews
And as the stab gets bigger and the wing smaller you find the optimum CG placement moving further and further back. Eventually the "wing" is quite small and the "stabilizer" quite large and we call it a canard. But the same formula can still be used to determine the neutral point and from that the CG.

Yep. You can actually generalize this, by varying the rear surface all the way from 0% to 100% of the total area. The attached drawing illustrates this. The curves were computed with a Vortex-Lattice program for the configurations shown. The curves will be slightly different for different aspect ratios, moment arm/span ratios, etc. But they should be similar I think, so the plot should be pretty generic. 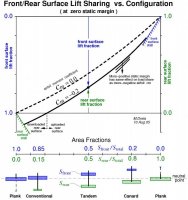 Going left to right, you start off with a flying plank, then progress though conventional, tandem, canard, and back to a flying plank. The flying plank cases at the two ends are identical.

For each area fraction, there is a corresponding lift sharing fraction between the front and rear surface, which is biased by the airfoil Cm and also by the static margin. Some useful observations:

1) As you approach the 0% or 100% (flying plank) cases, stall limits on the smaller surface force you towards a narrow Cm/stability margin combination.

2) It's not true that on a stable conventional airplane the rear tail MUST be downloaded. The load could be either way, depending on the tail area fraction, on the airfoil Cm, and also on the static margin.

Quote: BMatthews
As for the point quoted above I don't know if it's right or not but I like to explain it as "it's perfectly OK for the tail to have a positive lift as long as the wing has more lift than the tail.

Not quite. Stability deals not with the lift and moment balance, but with CHANGES in the lift and moment balance as the AoA is varied. A negative airfoil pitching moment complicates this because it biases the lift of the rear surface down, and the lift of the front surface up. But such a load bias from profile Cm does not affect the stability, since the loads' changes in response to AoA changes are unaffected. In other words, the tail download portion due to a negative Cm "doesn't count" towards making a stable configuration. Likewise, the canard upload due to a negative Cm "doesn't count" either.

One can in principle figure out the stability by looking at tail loads which have been "discounted" by the profile-Cm balancing requirement. But this is really equivalent to a classical pitch stability analysis.

Quote: BMatthews
By FAR the more common method was the positive camber sections. The Brooklyn Dodger by Taibi being one of the more popular designs that used that form. Oddly enough on the plans it shows the stab with more positive incidence than the wing IIRC. I read somewhere that he had a problem with it tucking and put the stab on "upside down" and it cured that and it flew well so that was how it ended up in the magazine.

Camber of the wing or tail will have no effect on stability, as long as the airfoils are well-behaved. By this I mean that the lift curve is linear (no deadband, hysteresis, separation, stall, etc), and the pitching moment is constant. If adding camber DOES affect the stability, then there must be some non-ideal airfoil behavior at work. Unfortunately, non-ideal airfoil behavior is almost always accompanied by high drag.

Source: https://www.rcuniverse.com/forum/aerodynamics-76/3274986-cg-vs-airfoil.html#&gid=1&pid=2​
I am pleased to see that Drela's graph seems to track exactly with what I understood in terms of relative wing loading in Mignet and other tandem types (3:2 ratio of front wing loading to rear wing loading). He adds an important caveat (note the two lines on the graph) that the ratio of front and rear wing loading must be even higher when using airfoils with high pitching moment (4:1 in this example).

I replaced the image of the graph above with a much clearer version courtesy of Mark Drela.

I remember reading that thread when it was new.
L

I replaced the image of the graph above with a much clearer version courtesy of Mark Drela.

You got in touch with Mark? We haven't seen him at the RC club in ages. I think the double bubble airliner keeps him too busy.

Yes, I just sent an email to his MIT address, got a reply right away.

That's a pretty good diagram, with a lot of information packed in. I have seen something similar before, I think in one of Stinton's books. I was just doing some brushing up on static longitudinal stability (in general, not specifically for tandem wings), so some of Drela's comments are timely for me.
You must log in or register to reply here.
Share:
Facebook Twitter Reddit Pinterest Tumblr WhatsApp Email Link