I don't think this has been discussed here but it's a handsome little airplane, certainly one of my favourites from Riding's Ultralights book.

Much like the Chilton, after production didn't work out the Major eventually had plans made available for home construction. If the performance numbers are to be believed it should scoot along pretty well on a Mikron, though most look to have been built with horizontally opposed engines up to 90hp or so. Plans are still available through Falconar though they list higher empty and gross weights than Wikipedia or period sources do, with a small note on "light weight options" that are supposedly contained in the drawing package.

Anyone have any experience with these or even have a chance to see one close up?

For what it's worth, here's one built from plans still going strong after 20 years.

PS--I love that book, which I discovered more than 20 years ago while living in England, but I've always wanted a Hillson/Praga Air Baby instead. ;-)

I like the Hillson-Praga too, and even know a guy with pieces of one, but it just doesn't look like it would be as enjoyable to fly. The Major looks like it would feel light and airy like a Cub but with added British charm.

Not me, for some reason I really like the Praga cockpit arrangement and pug-nosed charm. I think you could get an Air Baby-like modern design down to microlight gross weight of 472.5 kg (max allowed with ballistic chute, otherwise 450 kg) with a big bore VW and have a really cute, fun little plane. You can even fly with the windows open! ;-)

Two can play that game...

Fly with the windows latched under the wings or Windows off and door latched down about first of May until middle of Oct. of each year. Cost 3 mph in cruise speed.

cluttonfred said:
For what it's worth, here's one built from plans still going strong after 20 years.

PS--I love that book, which I discovered more than 20 years ago while living in England, but I've always wanted a Hillson/Praga Air Baby instead. ;-)

Ooh thats super cute. I like how the canopy pops up to enter. It feels like it was derived from an early sailplane like the KA-4 only side by side and cantilever.

addicted2climbing said:
Ooh thats super cute. I like how the canopy pops up to enter. It feels like it was derived from an early sailplane like the KA-4 only side by side and cantilever.
Click to expand...

Yes, it does have an early sailplane feel about it. For anyone that is not familiar with the Air Baby, here is a pic of the canopy open.

There were a few variants of the E.114 produced with engines up to and including the Mikron and A-65. One example of the more refined E.117 design was produced just before the war, and a few more after the war. One was trialed with tricycle gear as well. The E.117 gained a proper door but, I think, lost a little of the original E.114's charm.

That's Paul Keane in the hot seat of the Luton, operating out of Coonagh in Limerick. 400 metres of tarmac. Lovely aircraft to fly, apart from hopeless ailerons. The wing fold is simple and easy to operate and because it's about the size of a Super Cub, the wing fold reduces it's footprint considerably. Visibility out of it is very good but not quite in the Super Cub class.

That’s really the part I was looking for. Do you know of anything particularly quirky about the structure or handling? I also seem to remember reading about a couple of in-flight breakups of these, is that something ever talked about around Mr. Keane’s Major?

When Pete Plumb gets his O-100 finished maybe we could convince him to make an in-line variant..

VP1 said:
When Pete Plumb gets his O-100 finished maybe we could convince him to make an in-line variant..
Click to expand...

I already sent Pete an email with pics of the air baby. I have been helping him out with some cad work on the DP1 and needed to reach out to him anyway. Curious if he has ever heard of it.

They were grounded because two suffered structural failures in flight, one of which had been aerobatted, when it was not supposed to be and the other had had a heavy landing and was allegedly flown without inspection thereafter. The builder of this aircraft had tried to get the UK CAA to accept a new build one as a two seater but they refused, despite a long campaign to show that they were and are very safe. The CAA wanted them to be fitted with a steel cage in the cockpit. Eventually, it ended up in Ireland and after a campaign with the IAA, helped by me as it's nominated Inspector under our homebuilt/classic organisation, they accepted it on the proviso that it never be aerobatted and it be kept indoors and well maintained. In flight, it's a pleasure to fly apart from the awful ailerons. It's very much a rudder aeroplane. It has spent it's early life operating off grass and now lives in Coonagh which is tarred. It takes a bit of getting used to, operating off tarmac. It requires weaving when taxying, because of the long, high nose. It has heel brakes and can easily be turned in it's own length. It has a 108hp 0-235 and easily lifts two persons. It's all rather gentle. If you can fly an Auster or a Taylorcraft, then this is much the same but has no issues about landing, as long as you pay attention to the approach speed and the rudder upon touchdown. The wing fold is childishly easy, involving withdrawing two pins and lifting a small hatch behind the cockpit and then swinging them both aft to where you can secure the wings to a small block on either side of the tail. The original importer had built a tail cradle with temporary jury struts for stowing the folded wings correctly. The whole operation took about ten minutes, with no disconnections. It also has a modern, tailwheel assembly, unlike earlier ones which had a castoring tailwheel unit.

Thanks Twodeaddogs, it sounds like the Major is much the same as any other pre-war two seat cabin plane. That’s pretty encouraging.

In the meantime, pics of other peoples’ Minors: 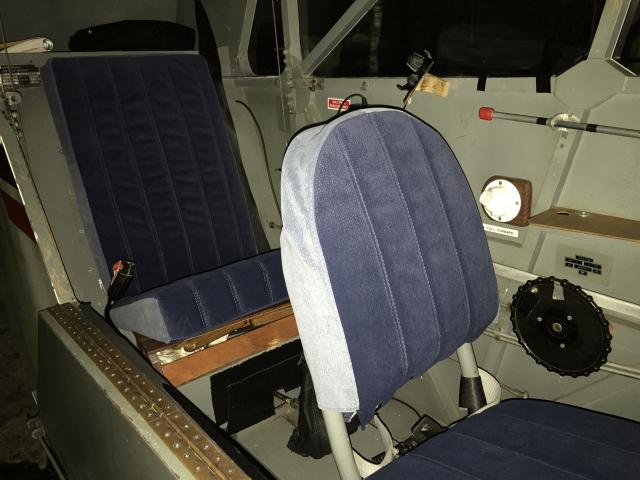 This cockpit is about my speed. No heavy, plush padding on the walls; the inside skin and the outside are one and the same. Ergonomically it looks very Cub-like in there. 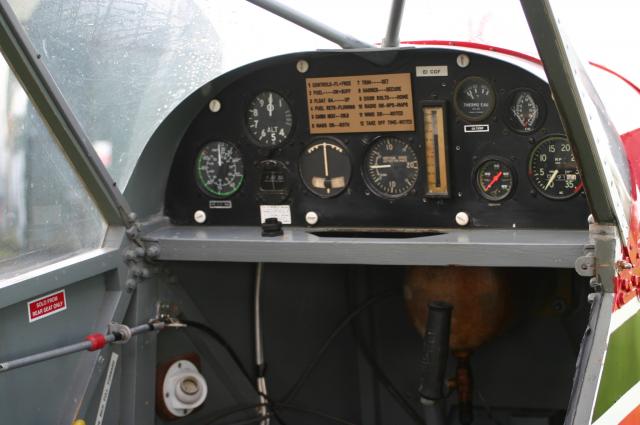 More than enough instruments. Looks like the fuel tank is between the panel and firewall just like a Cub. Also get a look at the throttle, it’s just a rod with a knob for each pilot. No quadrants, no linkages, no friction to adjust, just a single sliding piece. I don’t know why every tandem two seater isn’t like that.

Twodeaddogs said:
It's very much a rudder aeroplane.
Click to expand...

Does it have rudder pedals or a rudder bar?

For backgrond, here are some original notes and an article on the Luton Minor in FLIGHT back in 1938-1939 and Arthur Ord-Hume's article on the updated and redrawn Minor plans in SPORT AVIATION back in 1965. Ord-Hume is still around and may still offer plans, you can contact him via his web site.

It has a rudder bar. The previous owner had made several minor mods to it; one was a domestic doorbell as his PTT switch. In the bottom of the two cockpit switches, you can see a black button as the PTT on the flat panel below the instrument panel. He was a short man so he had a wooden stick extension to the front control stick. He also made the ground handling cradle for the tail, which used a battery drill to turn golf cart wheels to move the aircraft out of the hangar. Most of these mods are now gone. With regard to the ailerons, if you do build it, you might investigate gap seals for them.

Twodeaddogs said:
The previous owner... was a short man
Click to expand...

Do you think the rear seat would work out okay for a tall man?

Yes, no bother. The cockpit is tall and narrow and I'm 6'2" and fit with a headset. Also, access to the fuselage is by folding the back seat forward as there are only a few small inspection holes on the belly and down by the tailcone. I presume you are talking about Falconar plans?
2
You must log in or register to reply here.
Share:
Facebook Twitter Reddit Pinterest Tumblr WhatsApp Email Link