Is a half Subaru possible?

I've seen 1/2 VW engines, and 1/3 Corvair engines, but I can't seem to find any info on a 1/2 Subaru. I don't know that much about the Subaru engines, but I was just curious if it's been done, or if it's even possible.

Since it's liquid cooled, would be a major undertaking to plug all the leaks. Possible but not work the effort. Best to consider a smaller/lighter engine to begin with like the BMW.
N

It's been "done" But it's far from easy. when I say it's been done, water cooled blocks have been both cut down, and stretched over the years. There's V-12 GM blocks, and v4 and v6's built off of chevy v8's too. .... It's certianly not easy.

VW, and Corvair are "simpler" because there's no water jackets to think about. Also, they're older tech, and have more garage friendly tolerances. Half VW's are nearly a hacksaw job.

There was a v-twin Merlin, too.
N

That was in a motorcycle, wasn't it?

I hadn't considered the water jacket problem, so that makes sense. That probably explains why I've never heard of one.
Thanks,
Rusty
S

nerobro said:
That was in a motorcycle, wasn't it?
Click to expand...

Yup, an Australian built it I believe. About 5 liters.
S

So looking at my subaru and id say yes but not keeping it opposed. You would remove the cylinder bank from the crank case without the waterpump. And then weld on a plate to create an oil pan. Prety much becoming an inline twin.

Yes, and I have been to Lucky Kaiser's house, 10 minutes from where I used to live, and had a good look at it.
Beenleigh, Queensland for the Australians.


slociviccoupe said:
So looking at my subaru ....
Click to expand...

I don't see how one could go past a BMW twin.

You would only go to the trouble for an air cooled engine, VW obviously.
M

Ask and ye shall receive! The following photos are from the June and July 1998 Experimenter magazines. 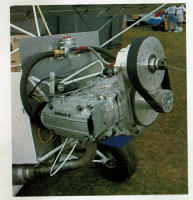 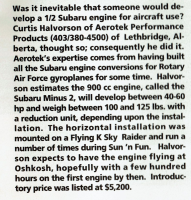 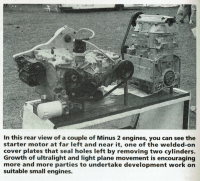 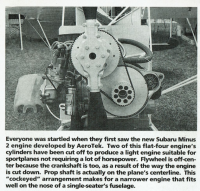 Must have used an Ea82, for 900cc with OHC. Needs a one bladed prop to complete the ensammble.

Interesting. Thanks for posting that. I guess it wasn't a big hit since it was announced over 20 years ago.
Rusty
S

While the Subaru heads are attractive, there are so many engines of the 500-1500cc range that makes building one seem to be an extraordinary investment of time and energy. The 500cc Yamaha Phazer snowmobile engine is in the 70 hp/130 lb range. Liquid cooled with a PSRU, it really only requires assembly with some fabrication. I wonder how the Subaru minus 2 worked? It would have to have a 180 degree crankshaft... I wonder how much it vibrated?
S

Mr. Halvorson seems to be a very accomplished engine modifier.

See video of a Top Fuel Hemi Converted To Burn Diesel on a chassis dyno.


The Aerotek engine below was converted from a Subaru automobile engine and was built by Aerotek Performance Products of Lethbridge, Alberta, Canada. Aerotek developed the adaptation for builders of homebuilt, experimental aircraft requiring a 40-60hp engine. The approach taken by Aerotek was similar to what many developers have done with VW engines and some with Corvair engines; i.e., modified a four- or six-cylinder HOAE into one with two (or three) cylinders. Most Subaru conversions require reduction of propeller rpm from that of engine rpm; i.e., a Propeller Speed Reduction Unit (PSRU). The Aerotek PSRU incorporates a belt drive of the firm's own design. The information here has been compiled from the Ultralight News Report from Sun'n'Fun 1998. and from SA9/98. All of these engines are non-certificated engines for use in experimental, homebuilt aircraft.

Another engine that has been used extensively in aircraft application, is the Subaru line - and Aerotek Performance products of Lethbridge Alberta has taken the "half Volkswagen concept" and applied it to two Subaru engines. The engines based on the Subaru EA 82 - minus two cylinders is 900 cc and comes in 45 and 60 hp. It also comes with direct fire ignition - which in automotive land means distributorless ignition.

Weight for either the horizontal or upright configuration comes in at 125 lbs. compete with a 2.1 to 1 belt reduction drive. TB0 is expected to come in at 1200 hours, this is bases on over 18 years of engine experience - by Aerotek including supplying engines to Canada's largest rotor craft builder RAF.