Please persevere with the alloy.

You will get there and increase your already great skills. You just need to shrink the area of the flange slightly to remove the excess metal that is causing the ripples.

Make micro shrink tucks along the edge and hammer them smooth, take your time and you will get there in the end. It often helps to have a larger flange as you can shrink it more in the edge and still trim at the end to suit.

Picking the right metal and temper are key, if needed heat treat at the end to correct hardness.
S

CriCri would be better, if using same structure wings, but with dimensions of MC30 Luciole and 810ccm Briggs with PSRU + bigger prop.

simflyer said:
CriCri would be better, if using same structure wings, but with dimensions of MC30 Luciole and 810ccm Briggs with PSRU + bigger prop.
Click to expand...

That would make it similar to the MC-100 Ban-Bi which is built using the same construction.
S

MadRocketScientist said:
That would make it similar to the MC-100 Ban-Bi which is built using the same construction.
Click to expand...

Surely not - BanBi is twoseater with Rtx912. Small 810ccm Briggs have only 27-33hp and also changing CriCri wings to wings of MC30 Luciole, which are only cca 15cm bigger chord and cca 7m span, get CriCri close to metal version of Luciole.

simflyer said:
Surely not - BanBi is twoseater with Rtx912. Small 810ccm Briggs have only 27-33hp and also changing CriCri wings to wings of MC30 Luciole, which are only cca 15cm bigger chord and cca 7m span, get CriCri close to metal version of Luciole.
Click to expand...

If you change things more than a small amount it would need a complete redesign. The nose is pretty low to the ground to install a single engine, while it has been done, I have no idea how successful the conversion were.

I cut up some of the 32mm thick 2024 for the parts on the front of the engines today. The cordless skilsaw makes quick work of the cutting. I finished the parts slightly oversize in the lathe.
I am still sorting out the drawings but I have most of the details close enough to make the blanks ready for machining.

Turned the sensor mounts from the 2024 donuts today (mmmm donuts) I still need to CNC more details into them but that can wait till tomorrow. The mounts are quite a close fit on the noses of the engines. 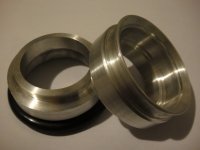 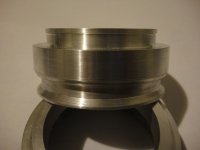 I finished the steampunk glasses frames today... no wait.. 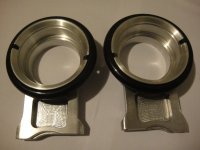 I cut the rest of the details into the sensor/starter mounting brackets. I used an offcut of 10mm acrylic to clamp the bits down onto while I machined them. 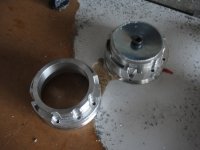 I decided at the last minute to add some lightening slots while I had still had each one jigged on the CNC. There are still some holes to drill to hold them onto the nose of the engine but apart from those, the machining is done. I also cut the starter mount 'ears' out of some 8mm aluminium. I used 5083 for these parts instead of the usual 2024 as I had an offcut handy.

What do the rubber rings do? I can’t tell what they engage. Pretty awesome work.

TFF said:
What do the rubber rings do? I can’t tell what they engage. Pretty awesome work.
Click to expand...

Ah, the missing link. That is what I thought you would have done, just did not see it. The starter is still just Wow!

Started cutting the spinner mounts today. I started turning them in the lathe and then gave up and did the whole lot on the CNC... Still a lot of cutting to go on these yet. 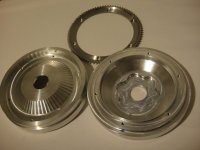 Getting closer to finished with machining the spinner mounts. It is just as well the whole aircraft is over engineered, otherwise I would feel that these are overkill with the amount of work going into these. They would be out of place on something simpler like a Hummelbird.

Turns out after inspecting yesterdays cutting, my CNC had a small amount of backlash in the Y-axis. I adjusted it out before cutting today and also cleaned up the slightly out of round cutting from yesterday. They are getting lighter all the time! 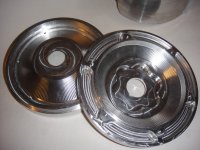 You have the cutest starters! Seriously this project is beautiful.

plncraze said:
You have the cutest starters! Seriously this project is beautiful.
Click to expand...

Glad you like them, I am quite pleased with them myself too

More progress today. I intended to chuck the spinner mounts in the lathe and machine some more from them but after struggling to get them centered and running true, I gave up and decided to start on the hubs.

I had been slightly dreading making these due to the keyway needed. I have never done internal keyways in anything before but after watching some youtube videos, I thought I could give it a try using the lathe. There is a good video on the sort of process here.. (the guy is an Aussie but he's quite the machinist so we will forgive him) 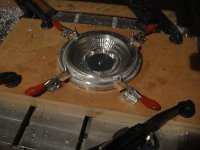 Anyhow, the first image is the setup in a hunk of mdf that I used to machine the backplates. I forgot to post this with the other photo yesterday I cut the mdf and them put thin superglue on the surfaces that the blank sits on. After the superglue dries I run exactly the same toolpath and cutter to clean up the mdf fuzz that raises up. This gives a completely flat and square surface to clamp the part onto. You would be really surprised how much an aluminium CNC bed shifts around with small temperature changes. Making custom jigs is faster and more accurate for what I do. 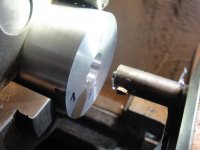 For today's effort, I faced the 2024 hub blanks and bored them to a slight press fit on the shaft, 20.03mm or thereabouts. Its the same size or a couple of hundredths of a millimeter under the size of the original. The hub ibeing heated to get it on and off the shaft along with a puller. I then used a boring bar and a hand ground piece of tool steel for the keyway cutter. A slightly smaller diameter boring bar would have made life a little easier (I don't have one) so that I didn't need to adjust the cutter halfway through the slotting process. 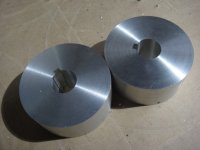 Turned out pretty good, not bad for a noob at keyway cutting! I might call beginners luck on that one. 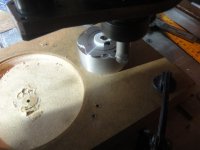 Then it was onto another jig cut into the trusty slab of mdf and I started cutting the drive spline (I think I can call it that, its only 4.5mm long) The notch out the white acrylic piece that is used for holding things in place, is so I could check that the keyway was properly aligned with the spline layout. The alignment didn't turn out quite as well as I hoped, so I may have to slightly move the magnet positions when I machine the hub. The igniton timing is adjustable anyhow. I will cut the jig with a tab that fits into the keyway next time to make sure things line up. 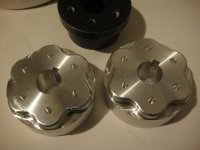 The front sides of the hubs, I will drill and ream the holes to size later. 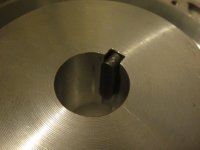 And the key fits.. 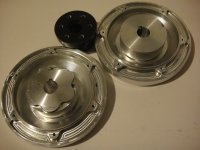 Spot the whoopsie on the back of one hub, I started cutting the spline so the keyway was in line with a bolt hole. There is more metal between the bolts, so the hub will be stronger with the keyway between two holes. A rotation in CAD and cut the splines orientated correctly on the other end. I had machined both sides of the hubs in the lathe, this one happened to turn out perfectly parallel on both sides, meaning I could flip it over a machine the other end without messing up anything. The mistake end will get machined off with the next operation. 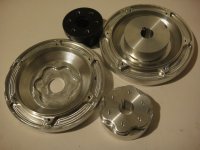 The hubs were getting closer to being finished... BUT i am not going to use them. I am happy with how they turned out even with the mistakes.

I made a machining error and cut too deep in a few places around the rim and went through to the front. I didn't look closely enough at the first one before running the second. I also have a few design changes to make (already) and so I will make a new pair. I will cut a different jig to get the alignment of the keyway better. I have all the setups pretty much programmed and can speed up the process on the lathe. If work is quiet I will start on the two new hubs tomorrow. I am still having fun

And then there were four... 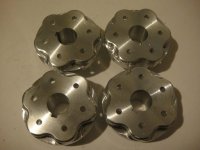 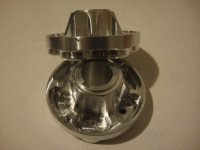 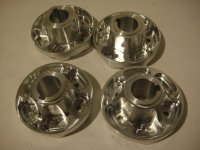 The new pair are much better and I only made one very slight toolpath mistake (not even noticeable)
I thickened the webs slightly compared to the first two and the weight is only 4 grams more.

Fitted the hubs onto a shaft in the lathe today and turned most of the spinner mounts to size. Everything is centered and running true and I can now attach the ring gears.
Original hub weight 207grams, new hub is 116grams.
The ring gear is 163 grams and the spinner mount is 210grams.

Continuing on with the little details for the propeller hub. Not long ago, I purchased some M10 grade 12.9 hex head cap screws with the intention of making then into the stubs for the prop bolts to screw into. Since I now have the hubs done I started work on these. 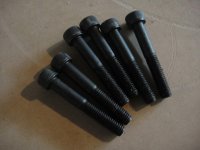 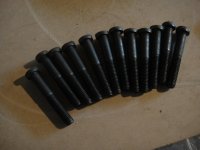 First I held the bolts in the vice and cut the excess metal off the heads with the cutoff wheel in the angle grinder. I will turn the heads to final length in the lathe eventually. 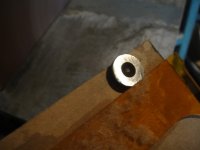 I needed a flat on each side of the head so I came up with a jig made from MDF, superglue and a couple of screws to hold it together. I used a guide against the front edge of my homemade linisher to make the flat a precise size. Once I had one side of the bolt head with a flat, I superglued a piece of acrylic to the underside of the MDF jig to hold the bolt in alignment for linishing the other side of the head perfectly parallel. The width of the flats is slightly under 14mm, enough to give a very slightly loose fit in the back prop hub. This should stop the stubs from rotating when the prop bolts are installed or removed. 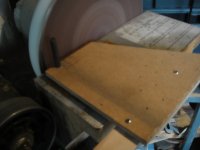 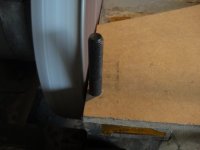 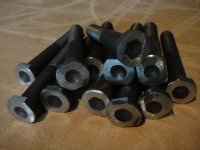 And a pile of modified bolt heads... 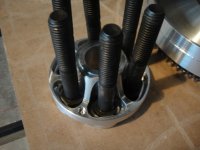 That fit nicely in the prop hub. 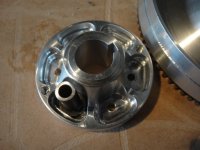 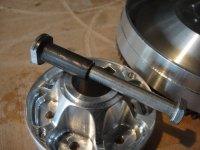 I made a couple of short stubs up a while back and I made flats on one of those too, the other one is lost somewhere, maybe its mate killed if off, must be getting bad ideas from the clecos. 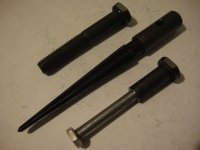 I have a tapered reamer for enlarging holes in sheetmetal. I may use the same angle taper for the studs that stick through into the back of the prop. Decisions, decisions...
Last edited: May 16, 2019
You must log in or register to reply here.
Share:
Facebook Twitter Reddit Pinterest Tumblr WhatsApp Email Link