If you want to ditch the alternator there are these. Up to 22 watt each.

I will be using two 38mm Mikuni TMX carbs because I have them. They weigh 1.45 lbs each. The intake port in the head is oval shaped and will be a bit of a challenge to minimize airflow direction changes.

Ken Powell said:
That looks like an auto transmission flexplate. What's the source of those parts (flexplate and crank adapter)? Is the ring gear stock size? I've never cut a taper on my lathe but I think that I can get it done if necessary.
Click to expand...

I have a basic lathe. To match and cut a taper like the B&S flywheel, I chuck the taper I want to copy (crankshaft or locking bushing) in the lathe and run a dial indicator aligned with the centerline of its taper. I carefully rotate the cross slide until the indicator stays zeroed along the length of the taper, then tighten the cross slide, re-check, and then replace the indicator with a boring bar. (Be sure to lock the carriage) Then I place the new part in the chuck (pre drilled with a suitable sized hole), and take small cuts and make slow, even passes until the OD of the large end gets close to the OD of the matching part. Do a trial fit between tiny cuts from that point to work up to the correct fit. Use valve lapping compound to finish the job. You can watch the lapping process on the ARC Racing youtube video "Installing an ARC racing flywheel." The process is remarkably quick. Hope that helps. BTW, if you get the taper right, you won't need a keyway. (More info on that in the ARC Racing video.)
Last edited: Feb 2, 2022
K

Thanks for the great instructions. This is going to be an interesting project all by itself.
K

Ken Powell said:
I keep learning details about the Big Block 993. I hope it's OK to share here as I identify important details.
Click to expand...

It's great, thanks for sharing. If desired, you could start a project thread to keep your ongoing efforts in one place, undisturbed by others chiming in (and/or could start a matching Q&Q thread so the peanut gallery can chime in).
I'm looking forward to see how your project goes, thanks for taking the time to post about it.
K

I started here because I didn't know if the minimax could handle the weight. When Stuffengineer confirmed a longblock weight of under 80 lbs I knew it would work. I think you are correct that I should start a project thread.
V

Ken Powell said:
I think you are correct that I should start a project thread.
Click to expand...

There will be wide interest in your project. There's a lot of fun flying to be done on 30-40 HP. Some folks don't want a 2-stroke, others, for whatever reason, don't want a 1/2 VW. Your direct drive B&S 993cc conversion and TiPi's B&S 810cc "heads down" conversion can show builders other options. Even if your project is strictly for your own plane (so no special effort to use widely available parts, no intent to sell needed parts etc), just posting about your decisions and how you put things together will save someone else a lot of work.
Thanks again.
Mark
Last edited: Feb 7, 2022

I am following as I to think this a viable solution to 2 cycle engines. I have a Super Pelican that I am considering using one on.

I put the scales under my engine bits (finally), the complete engine weighs about 37.5kg and the long block (block with all external bits removed) is about 20kg. The full list of all parts and weights is here: B&S 49-series (810cm3/49ci) - TiPi's conversion for aircraft use
K

TiPi said:
Starter ring gear: OD = 246mm, no of teeth = 114
The alu ring gear (ARC) is identical in dia and no of teeth
The flywheel taper is 36mm high, small ID = 24.8mm, large ID = 30.5mm
The hub adaptor that I have (ARC?) is 38mm tall, with only slightly different ID's
View attachment 121415
View attachment 121416 View attachment 121417
The "flywheel" is still work in progress as I need my new lathe to finish the hub and disc to accept the ignition magnet and alternator magnets.
Click to expand...

Thanks for posting this info, I was searching for exactly that!

Model 38 Vanguard: oil, elec start, stock flywheel, no pull start, stock Nikki carb= 79.05 pounds. basic exhaust (lightweight custom with muffler) = 3.9 pounds. Ace Redrive or equivalent = 10 pounds, 3 blade ultraprop II @ 62" dia = 7.83 pounds. That's 100.7 lbs. Remove all the shrouding and fan, and the engine in the same config weighs 72.75 without exhaust. So, there are your actual scale weighed 627 numbers. Ready to fly. Switch the stock flywheel to an ARC aluminum version (6.5 pounds) and you save an additional 8 pounds. Bottom line: 100.7, 94.48, or 86.48 pounds ready to fly the plane. Note, the UP II is one of the heavier props available, but it, and the standard UP are two of the most efficient for low HP thrust output. That said, there's a couple of pounds you can lose there, and two more if you wear ear plugs and run straight pipes. I'd strongly suggest a muffler for the sake of the future of experimental aviation.
P

Has anyone considered turbo normalizing a B&S? There are lots of small “coke can” turbos now, from both reputable manufacturers and China. Seems like it might be a way to get the extra 10 hp at moderate weight. Also my closest runway is at 9000 ft so this would make a huge difference for me, tired of driving two hours downhill to fly…
S

ProfJ, when I looked for a small turbo years ago, it seemed that the smallest would be a bit large for efficient operation. So, how far off the efficiency scale are you willing to go? My online investigation was limited and out of date. Your motivation is much "higher". The smallest turbo plus an after/intercooler. How much could that weigh? If you pursue this, I will follow your investigation closely. Placement of the turbo to allow oil drain back without adding a pump is an issue.
V

ProfJ said:
Has anyone considered turbo normalizing a B&S? There are lots of small “coke can” turbos now, from both reputable manufacturers and China. Seems like it might be a way to get the extra 10 hp at moderate weight. Also my closest runway is at 9000 ft so this would make a huge difference for me, tired of driving two hours downhill to fly…
Click to expand...

ProfJ,
Welcome to HBA.
I'm not aware of anyone adding a turbo to a flying industrial engine. If appropriate turbos exist, I'd think maybe it would first be done in the lawnmower/ tractor racing world.
Boosting an air cooled engine is certainly possible, but generally there's less room for continual boost than in a liquid cooled engine due to head cooling limitations. Turbo normalizing is less problematic, but there's still the cooling problem. Forced convective heat transfer is less effective in thinner air. Even the slightly cooler air at altitude isn't a big help, it's much less of a factor than when we are using a radiator, etc.
I'm not saying it's a bad idea, just that there will be significant limitations.

The more prevalent way to get more HP from these engines is to run them at higher RPM and use a reduction unit so a reasonable size prop can be turned efficiently. This doesn't improve the continuous HP that the engines can produce (it is still limited by the CHT), but is good for short term use (takeoff and initial climb) and the larger prop provides more thrust for the same HP at low speeds. For reference: The Valley Engineering 993cc engine with PSRU and tuning work produced 32 HP continuous, but up to 50 HP for takeoff and climb.
Last edited: Apr 16, 2022
R

Builders, Here is part 2: . “Boosted” engines: If normalizing is trying to maintain 29.92″ of sea level pressure in the intake, a boosted engine is driving the manifold pressure a…

flycorvair.net
When thinking through cooling of turbo or super charger compressed intake, it is worth considering William Wynne’s experiments with the (admittedly much larger) Corvair. He asserts that the fuel evaporation cooling effect from compressing the fuel air mix instead of just the air (draw through vs blow through) can be enough to minimize the need for inter-cooling. An oil pump is still going to be on the menu, but maybe not an intercooler. Good throttle response is not as important for aircraft engines as for racers…
K

Stock cam - note that there is no decompression device. 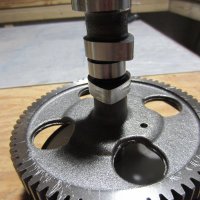