I had a really nice trip in the Hatz this weekend. It was a trip I’ve wanted to do for over thirty years.

I got into serious backpacking a few years after learning to fly and buying a Taylorcraft My first few multi-day backpacking trips were in the Adirondacks, where I discovered that Marcy Field (1I1) was right at one of the High Peaks trailheads in Keene, it seemed natural to fly up there for a hike. It never happened while I owned the T-Craft, then there was a long period of not flying, followed by a succession of ultralight and single seat aircraft with limited baggage capacity… the Hatz is the first plane I’ve had since the T-Craft with the capability. I finally planned the trip a couple of years ago but weather interfered, so I flew to Massachusetts instead for a shakedown run. This time it worked out perfectly. The plan was to hike in about a mile and a half (and 800’ up!) from the airfield to the last stream crossing where I could get water and camp there, then the next day carry a light daypack to the summit of Blueberry and maybe Porter Mountain and have lunch there before returning to the same campsite for a second night before and easy hike downhill back to the plane. 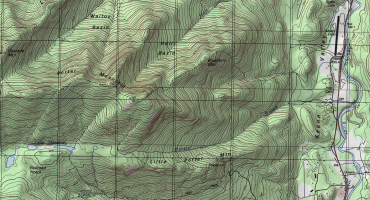 The 185NM from Chester (SNC) in Connecticut isn’t far for most modern planes, but it’s a bit of a journey with the Hatz’s Cub-like speed and small fuel tank. I planned fuel stops at Great Barrington, (GBR, cheap 94UL) and Ticonderoga (4B6), and got the plane loaded, control stick removed and backpack strapped to the front seat, the night before for an early start. The weather didn't cooperate, though; the morning fog at SNC didn’t lift until around 10am, at which point the nearest reporting point to GBR was still LIFR and looking like it might stay that way. It was better farther east and north so I switched the fuel stop to Turners Falls (0B5). An easy flight, and when the guy came out to help me with gas the first thing he said was, “Is that Vic’s old plane?” Yup, the plane was based at Orange when I bought it, only 16 miles from 0B5. The flight from there to 4B6 was routine, except for the 4500’ I climbed to when crossing the mountains of southern VT; I was glad I’d layered up, even so, it was chilly.

The short flight to Marcy Field also required some altitude. I skirted Giant Mountain (4626’, I know you western guys are laughing) to the north, then dropped into the Keene Valley to land at Marcy. 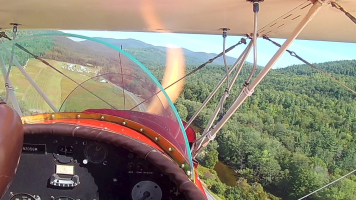 While unloading my gear a guy came by to see the plane, his house was right under where I turned final. He suggested I move the plane back in front of an old hangar behind the treeline so as to attract less attention from inquisitive eyes, so that’s what I did. 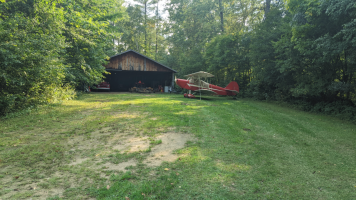 By the time I got on the trail, it was around 4pm, far later than I’d planned, but I only had to hike a short distance to get onto state land where camping is allowed, and sunset wasn’t until 7:30… no problem. Since this is a flying forum I won’t bore you with too many details of the hike except to say it was a beautiful weekend, I saw nobody on the trails, and I’m no longer 20 (or even 40 or 50!) years old anymore.

The airfield is visible a viewpoint near the summit of Blueberry: 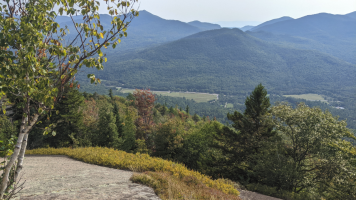 I made it to the top of Blueberry Mountain, 1300’ above my campsite, and at that point declined to climb the additional 800’ to the top of Porter Mountain so I hung out on top for awhile before hiking back down and relaxing at the campsite for the rest of the day. 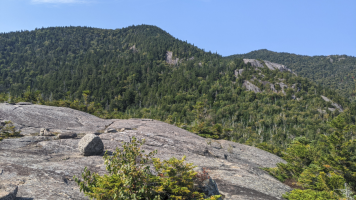 Back at the airfield Sunday morning, I dropped my pack at the plane and walked across the road for a dip in the Ausable River to rinse off some of the stink from the hike, then to the farmer’s market happening on a corner of the airfield for a pulled pork sandwich from a BBQ truck there. I finally got enough of a cell signal for a briefing, weather was looking grungy farther south but still forecast VFR. I made a quick lap around the pattern for some filming before heading home. 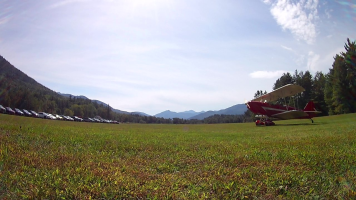 This time I went around the west side of Giant Mountain: 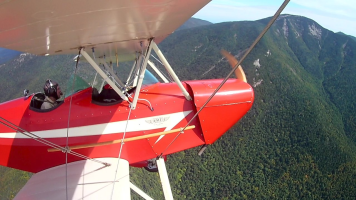 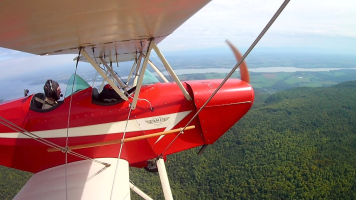 Gas at 4B6 again, then GBR this time after flying through some rain. At GBR some clod had parked his Cherokee in front of the fuel pumps and was nowhere to be seen (the place was deserted). I managed to pull the hose around to the back of the pumps and fueled up with 94UL, wandered into the open repair shop hangar (again, planes opened up for maintenance but nobody around) and found a restroom, then took off without ever seeing a soul except for one old guy who stepped out of a building farther away, looked at me as I was rolling up the fuel hose, and went back inside. Weird. As far as I know that Cherokee may still be sitting there in front of the pumps.
Fortunately, it wasn’t raining (much) while I was getting fuel. I flew past low scattered clouds and windmills, and through some more light rain. 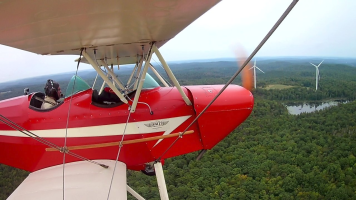