At one point the engine in my Sonerai 2L was an Aero-vee from 2002. According to the logs it was upgraded with the nikasil cylinders when they came out. that proved troublesome. The engine was replaced with a GP 2276 & Diehl case.

I received the Aero Vee case (Mounting plate, alternator, starter, and ring gear, all dis-assembled), with the airplane.
Someone asked to buy them. Neither one of us has a clue what the "value" would be largely because Aero-Vee does not sell most individual parts. (They show some replacements in the catalog, e.g. new sky-tec starter @ $315 to holders of an engine serial #).

I am hesitant to sell parts until the airplane (or at least engine) is proven again. OTOH, there are enough other accumulated parts, machines, tools, etc for my extended estate sale as it is, and best not to keep things that will never be used if someone else can be getting something out of them.

So, are there any pros/cons between Aero-Vee and Diehl set up?
Intrinsically i veer toward the straightforward cost effective aspect of GP products. OTOH are they firmly re-estabished as an on-going supplier?

PS: we are both machinists and can make, repair or adapt the worn parts shown as necessary. Condition certainly affects the value question. (starter also exists, not shown) Nonetheless, neither of us would likely use them as the maker intended, directly. The abiding question to relieve my jitters about disposing: does Aero-vee or Diehl have any advantage that the other does not? 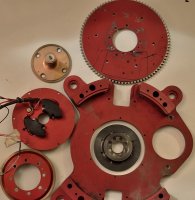 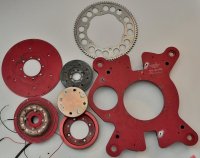 Price to replace will go to the Aero V just because you have to own an engine to get a part. The people in need’s value is different than someone just wanting it. Small market either way. Not going to be more than a couple of hundred bucks either way. Better? One with a pretty much a copy of the other in different materials. I bet one is lighter than the other. You may need ballast or you may not. Being a machinist, pretty easy to copy the Aero V at home if you have a template.
K

Aviacs said:
So, are there any pros/cons between Aero-Vee and Diehl set up?
Click to expand...

I've been watched John Monnett work for a LONG time. The red AeroVee stuff is his second major iteration of conversion accessories, and he's always about knocking the money and the weight out of his products. The first generation ("X-casting") stuff used a lot of castings (as the Diehl/GPASC stuff still does). The second generation is all chewed out of billet. I think John considers this Better/Cheaper/Faster/Lighter. The second generation stuff is definitely lighter than the Diehl/Great Plains stuff, John's primary ignition in particular is far lighter and more compact than a Slick magneto, as well as cheaper, and I like his secondary ignition better than the GPASC setup driven from the oil pump, although I don't consider dual ignition on these engines as a Must Have. I don't see the Magnetrons in your collection of parts, and Aero Vee WILL sell you those (about $60 each?), although to mount the current production versions may require some die grinder work on these early production mounts, as the spark plug wire exit from the coils changed at some point.
I've been studying this situation a LONG time, and I consider EITHER of these setups acceptable (My PREFERRED setup is Flywheel End Drive, but that's another thread....); I put my money where my mouth is, and recently bought an AeroVee powered Sonex.

Aviacs said:
Intrinsically i veer toward the straightforward cost effective aspect of GP products. OTOH are they firmly re-estabished as an on-going supplier?
Click to expand...

Great Plains seems to be a One Man Outfit these days (Art). And he's had some family health issues? And he had some issues with his domain name and his ISP (I've spoken with him on the phone). So comms have occasionally been sketchy or slow, but there is a thread on this point, and people regularly report getting parts shipped with acceptable lead times. He's not the World's Foremost Authority and Innovator that Steve Bennet (of blessed memory...) was, but I consider them Viable.

I think these parts are worth maybe half-dozen Benjamins flying in formation. Try Pat Panzeras experimental aviation marketplace group on FB, or the handful of FB VW Aero Engine groups, or the classifieds here.
A

Posting here and doing a bit more research (called Aerovee, uncowled and dug into my airplane a bit yesterday, e.g.) I've decided to keep all the parts until the route to AWC, and hence the build is clearer. My Diehl "case" is only the X frame, like the original Monett, so no easy provision for a starter. I might still go Diehl from GP, or make an adaptor using the Aerovee flywheel and starter motor.

I tend to think of magnetos as crude, but somehow it makes me feel cosier having one as the secondary ignition, as the current Diehl/GP set up includes. Esp since the aerovee failed when the 8 dowel flywheel hub loosened and the parts backed into the coils, (see photo above) destorying them. OTOH, the large capacity, light weight batteries today would give some ignition redundancy. So many choices

One of those sets would be a help on the T mono plane. PM with more details .