To start, we're going back in time to September 2019. I had just gotten my PPL & was starting my IFR training. I realized the required hours for IR & CPL would cost a lot renting at 180$/hr in the school's 172s (and the 130$/hr Cherokee had just been taken down for maintenance), so I set off on the path of buying an aircraft.

I was browsing Barnstormers & came across a low-time, good condition Rotax 503 DCDI (Provision 8, modern version) within a two hour drive of me. The previous owner was building an UL & the 503 was too heavy, so he was switching to his 447. He had cleaned & bagged the air filter, replaced the fuel lines, & changed the gearbox oil; The engine looked in good shape so I picked it up & began narrowing my kit options.

I did a ton of research on what aircraft to buy. My mission was simple, I thought; One seat, cheap-ish, & good off-airport performance.

The last one was the big reason I went with the Ridge Runner over building a new MiniMax. Both were made to use the 503, but the RR could get into places the MiniMax definitely couldn't. There's many reasons why I wanted STOL capabilities; Out in the rural areas I can actually commute with the plane, it gets the same or better MPG than my car (assuming no wind)! One of these days I plan on flying this bird to Valdez & really putting it to the test

Finding a Ridge Runner for sale was a challenge. I checked Barnstormers, Craigslist, & Avidfoxflyers every day for almost a month before this popped up! There had been an ad posted years ago for this plane, but the owner had just relisted it on Barnstormers the same day I went looking. I took a huge risk & bought the aircraft unseen, & had it shipped from Washingston state to Vermont - Luckily it paid off, the paperwork was all there & the airframe was in good condition! 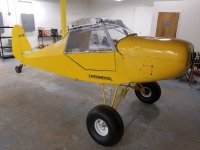 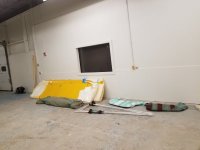 All the parts were there, and we were considering assembling the plane & flying it after a good inspection, however little things kept adding up that required a re-covering of fabric on everything.

For starters, the entire plane had been rattle-canned & brushed over with yellow poly-tone, and it was a very rushed job. To say the plane was ugly would be an understatement, and there was a lot of extra weight in that paint.
Most of the fabric was in flyable condition, there were only a few places that needed patching. However, the closer I looked, the more I saw chips in the powder coat that were rusting; On the airframe, on the landing gear, & on the lift struts. These all added up to be more than I was comfortable with, especially in the long run. 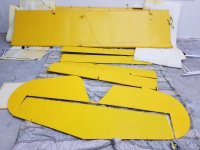 Originally, I was going to clean everything as best I could & repaint over the chips with enamel paint. It would've been the cheapest option, that's for sure. But, with everything else wrong with the rest of the parts, I decided to tear the whole thing apart & replace the fabric with Oratex.

It was a very good idea to take the plane apart, in hindsight. Both wings' false ribs had detached, and were only held on by the fabric. There was a hornet nest in the right wing, too.

The left wing was damaged pretty severely, unfortunately. Two of the three drag wires were unusuable; One bent, one broken at one end. The whole spar sweeps backwards about 1 or 2 degrees midway down the wing - The A&P who's doing the condition signoff said it looks like minor ground loop damage.

These are the prices we pay for not doing a prebuy! Luckily, the mechanic & FB group agree it's still flyable - Just gotta fix it.

In the next few posts I'll talk about where the project's at now & what the next steps are, first I gotta take more pictures! 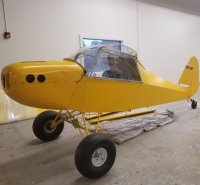 I don't know about y'all, but these past weeks have gone by in a flash. Somehow I've gotten on track to fly at the end of next month!

In these boxes is an airplane (some assembly required). It may look like chaos, but I've finally gotten a list done of every project that needs to happen before I'll be flying.

This is one of the major reasons I've been set back; The left wing has minor ground loop damage & the tip rib as well as two (of three) anti-drag wires need to be replaced. My goal is to have these damaged parts removed by the end of this weekend. I have new ribs coming from Just Aircraft (apparently the Highlander & the RR/SR series share the same airfoil), once those arrive & get installed I can move onto the final steps before fabric.

I have to clean the expanding foam off the gas tanks & strip the paint off the tank covers/cowling, then those can be installed. Luckily the gas tanks can go in after fabric since they're enclosed with aluminum sheets, though I'll most likely mount them before covering anyway.

I'm very close on having the fuselage ready for fabric. The aluminum panel is cut, currently waiting on avionics trays. Once those arrive, I'll be able to assemble the racks & send off the assembled panel for powder coating.

I've decided to coat the panel for two main reasons; First, glare sucks & black powder doesn't reflect as much as bare aluminum. The other reason is vain; The avionics shop offers N number engraving that cuts down to the white underneath. I've seen a few of these panels & I love them so much I'm willing to deal with the weight difference.

Once the last package from CPS comes in (hopefully it'll be shipping tomorrow), I can start the top end rebuild. I've got new rings & spark plugs, just waiting on gaskets now. I've even got all the hardware to mount the prop, maybe we'll run the engine next weekend!

After reading this, I realized I skipped over a lot of what happened between these posts, sorry! I'll do my best to summarize, however I'm planning on making a YT video series on this build & the first video will cover it more in depth.

Basically, there was too many chips/cracks in the powder coating for me to be comfortable flying, so while the entire plane was stripped down I had most metal parts blasted & re-coated with an epoxy primer. This took a really long time, and was one of the major setbacks but it was definitely worthwhile. I don't have many pictures from this time, since I spent months waiting to be able to work on the plane at all.

Once I got the metal parts back, I put the plane together as a skeleton to get an idea of everything I needed to do before flying.

There aren't many steps to do before I start covering the wings + fuselage with fabric; Once I pick up the belcrank next week & can install the elevator push rods, the fuselage will be ready.

I picked up epoxy thinner today & will hopefully have the damaged parts off the wing before the weekend is over. I'm going to measure the wing twist, if it's within spec I'm not going to bother bending the spars back. If it's out of spec, I'm going to build a jig & do my best to bend them back & heat-treat it with an acetylene torch so it'll hopefully stay.

My brother & I twisted & pushed on the wing spars a bit to listen for creaking, cracking, etc. and heard nothing. It seems the ribs are all still in place with good bonds, hopefully this means the wing twist is within spec too; I'll know for sure after this weekend.

I've decided I'm not comfortable flying with the damaged wing, so I've started the process of building a new one. The new spars should be here in about 3 weeks. Just wanted to let y'all know I didn't drop off the map entirely

New spars will be here next week or the week after, so I'm doing my best to knock out the small projects I can manage before finishing the wings.

Today I managed to get the avionics stack angle riveted onto the panel; This was my first shot at riveting anything together, & I think it came out good enough. It's a little uglier up close, but it's solid & flush so I'm happy.

I was originally going to use flush rivets (as you can see by the countersink), but couldn't find anyone locally set up to drive them & couldn't justify buying a whole setup for 8 rivets. The countersink helped make them more flush than usual I think, but regardless I'm happy with how it came out.

Over the next couple days I'm going to mount the trays for the GPS, radio, & transponder so I can send the panel off for powder coating & engraving. Once that comes back, I can begin torquing everything down with nylocs for the final install.

I decided to capitalize on the wing-rebuild delay by ordering a BRS chute for the plane. Their shipping estimate was 8-10 weeks, which I feel is enough time (with plenty to spare) to get the rest of the plane airworthy. I'll wait to do fabric until the chute's installed, but even accounting for delays & days off, I'm about 12 weeks out from flying. Counting down the days!!
Last edited: Jul 20, 2021
You must log in or register to reply here.
Share:
Facebook Twitter Reddit Pinterest Tumblr WhatsApp Email Link