Yes it is a male tail wheel. No I did not weigh it without the engine. In fact there is no record that I have that shows that any of the previous owners had any weight and balance info. Hard to believe. You would think the DAR who signed it off would have baulked at that. Get this, when I took this thing apart, the firewall which is supposed to be stainless steel or galvanized steel was in fact 2024 T3. Not cool. So sorry I did not weigh it witout the engine. I suppose we could take the published weight of the O-290 D2 and figure out weights which that number does not include to come up with a baseline number without the engine. One other thing, I think my fuel quantity is probably close to 17 gallons rather than 14. There is going to be some variation between builders. You will probably come in lighter than you think.
I don't know how the prototype came in at 605. A longer gear, bigger engine, more fuel, heavier fabric, maybe a metal prop, and a heavy starter, heavier ribs, heavier cowling and fairings all add up and pretty soon you have gained 120 pounds. 605 pounds is hard to believe. Have you checked any more on the Vernier's ability to snap. Must have weak crank. I wish I knew a light radial for you. But you will do better without the frontal area. You know you have quite a bit of wiggle room on your weight. RK designed it for a 180 lb pilot at 1000 lbs and 10 gs. I have not done the math but say you weighed 1100 lbs, you are probably still good for more than 6 gs and I doubt you will ever pull more than that. This is not an unlimited category competitor. Keep your fabric and paint light and you will be ok.
F

It is also possible that back when the prototype was weighed, they may have used bathroom scales, and that would likely throw the actual weight way off. I did a preliminary weigh using a bathroom scale and It was coming in at 575 empty. A far cry from the 715.5 that certified electronic scales measured. So Dominic..........I suggest you weigh yours with a 1960s bathroom scale. No worries mate.

bathroom scale it is then!
My plans indicate a +10G -6G at 850lb mauw, still it is a bloody strong airframe by all accounts I’ve heard of. It’s interesting to note the various parts of the structure and the loads they see.

I believe the proto had no electrical system etc.. and only ali LE wrap on the top of the aerofoil.
Im thinking of using a lighter tail wheel, I
Have the old solid one from the RANS S6S, it might fit, I’ll have to weigh it and see if it is in fact lighter.

Lovely Day in QT at the mo, went and did I little maintenance on the S6S and of course a little STOL practice, now flying para in town, last pax puked on short finale

been cleaning her harness in the landing, ah the glamour of the job 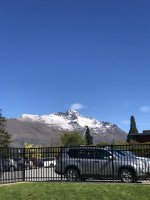 I was digging through old documents from the 2nd or 3rd owner and his notes show the gross weight at 1100 lbs. So, who knows? Looks Nice there. Time for us to start packing. Here is the view this morning from my house. Finally some blue sky but the wind is already pushing 30 knots at the airport. 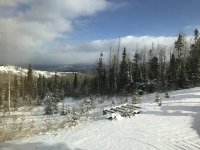 Yea, I have that same engineering diagram with my plans also. Pretty comforting, assuming there is not stray bad glue joint or two. I am convinced the fabric holds it all together like an Ace Bandage. RK did a really good job of interconnecting the whole thing!! Mighty Cool. I think I am going to go to my aluminum stash which I was saving for the next airplane and appropriate some aluminum for top side gap strip fairings. The existing bottom side fairings are ok. Have you good fairings or are you going to make new ones? I really liked the look of the carbon fiber. My temps are down now so it is difficult to go that route and I think Aluminum will be faster. The carbon fiber fairings are feather light, so you might go that route if you can. It would be easiest if you built a left and right plug to lay-up on. Here in Wyoming, I can get a roll of carbon fiber twill fabric, resin and hardener cheaper than comparable aluminum. Shipping costs are more than doubling the delivered cost of aluminum. Too bulky. I look forward to flying mine. Not so much the landing.
F

Weather is finally looking better. Headed for the airport. 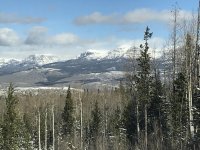 It fortunately still had all its fairings, it also has aluminum aileron top surface gap seals. I’m not sure if they are a good idea or not. Does the frise style aileron need to have the air flow freely out the top surface to provide the control boost they are meant to?
I will for sure make a lighter rear turtle deck to tail plane fairing, the current one is very heavy 360g 12.7oz
I’ll weigh the wing attach gap seals and see how much I could save making new ones, I believe fiberglass can be made nearly as light as carbon if the epoxy is kept to a minimum, certainly cheaper.

at least the temp will help your DA today!
F

Hey Dom, Tried attaching videos but I get a prompt from the website stating the uploaded file does not have an approved extension. What can I do?
D

Hmmmmm I’ve not tried to upload a video here before. Is it from your phone? Apple or android?
Could ask a moderator here.
So I assume the test flight went ok?
F

Iphone. No flight test yet. Still have to make gap fairings. Too windy also. Have decided to go back to carbon fiber gap strips. My aluminum supply is already cut for an RV-4 fuselage and I don't want to mess it up. I ordered more carbon fiber and MGS resin. I am adding winglets to my Ventus. I have enough extra to make the fairings and I will just crank up the heat in the garage to do it. Probably cut out a couple ribs and make a lay-up for them and try again. I was laying them up on the wing before and there was no hard bed for the fairings to lay on which caused problems wetting them out. Hopefully this next week or tomorrow I can get my Condition Inspection signed off. More snow expected Monday. So it may be awhile before the stars align for a flight. Need to get some Uggs for my feet for flying this winter.
I used to fly the Wave in them and ones that are knee high worked great. The soles are light and they don't screw up rudder feel. And they fit in the cockpit. Mice ate mine. I will eventually fly it. And like you said the DA will be lower and a snow packed runway might be a better deal. The Jungster on grass is easy. Landing on snow probably ok if the wind is down the runway.
D

I tried posting to You Tube also and had a similar issue.
F

I have videos of taxiing and thought you would enjoy that.
D

I would !, I wonder why both YouTube and HBA are having the same error. It doesn’t seem to be your end if the same is happening for me
F

I mounted the one good carbon fiber fairing. Do you think I should paint it to match the wing?

Here is a pic of F-14 with a small Beenie Spinner in case you might want to make that choice. I like the bigger spinner.