Would this require an STC... C182 question

I have a need to add a bracket for mounting in the cabin and have a question. In the floor of my C182 I have 2 vertical plates where my front seatbelt brackets attach. They are attached with a triangle shaped plate that when attached rotate as needed. The way this is done is with a internal standoff that is a bit longer and wont allow it to pinch the belt bracket bracket when tightened. There is also a washer on the bolt to take up most of the space but only leave maybe .010" so gap. I want to replace this washer with a rectangular plate with other tapped holes or a slot for a strap. This woudl allow me to make a fire extinguisher mount as well as something else I am considering in same place. Since its safety related by adding a fire extinguisher wonder if NORSEE would apply.

I assume the FSDO is who I need to talk to, but figured I'd run it by here first...
C

Not necessarily an STC, however quite probably a 337 Field Approval. Yes, this is something to discuss with your AI, and FSDO.

Agreed, a one-shot field approval is probably better. The big problem is that without any approval your insurance would use it as an excuse to deny a claim or not defend you in court. So it has to be legally done, even if it is something simple like that.

When is the nosewheel swap-out? I want to do mine at the same time, hopefully with the supervision/experience of your guy, or at least watching him before I do mine.

I would get an “approved” kit from Cessna or somewhere.

Duct tape it to your leg?

Surely a 337 and a mechanic with an AI and little knowledge will do.

D Hillberg said:
Duct tape it to your leg?
Click to expand...

There is a kind of flowchart by the FAA as to what constitutes a "major" alteration. It has to have an appreciable effect on any of the following: the strength of the structure, weight and balance, flight performance or engine operation. Your idea does not meet the requirements for "major alteration" if you go by this. If it isn't a major alteration, it does not need a 337 nor an STC. I know there are mechanics out there who will yell "STC! 337! TSO" when changing an airplane's ashtray. so don't let yourself be swayed by their opinion. Opinions don't count, facts do, but in the end you do need someone to sign off a log book entry.

When I was a DER, we had similar questions come up all the time for little mods during development. I mostly did transport category jets stuff, so even insignificant items had to be address in the design and drawings, and sometimes required structural analysis. It was just less liability on the engineer to insist on the most restrictive option so they can say they did everything by the book without question. This could rub the project manager the wrong way as it cost more money and time. in your example of the fire extinguisher mount for a small aircraft, I would find an A&P willing to endorse it If you think it could be a problem down the road. Just play test pilot/devil’s advocate with the design….make sure it doesn’t inhibit seats from sliding on tracts or impede rear pax’s during egress, effect remote compass sensors, won’t spray out if kicked, ect..

The FAA doesn’t care if such potentially life saving equipment is aboard…. As long as you make sure you jump thru every hoop so that can say they made you do everything possible, regardless of practicality or cost. That’s why GA is stuck in the 1950’s and certified aircraft are less safe.

many years ago a couple of us built a simple low fuel level warning device made up of a small float switch that attached to fuel sender flange. You would set the float to the level you wanted the warning to activate, say 4 gallons. It was simple, cheap and could likely save many of the fuel exhaustion crashes that continue today. The FAA wanted a certification process that was so over the top, the expense would not make sense And we would be out of business before starting Sales. We kept the prototype on the plane for decades and it worked great. I often wonder how many life’s and crashes such simple devices could have saved if weren’t for the FAA. This is why I love experimental so much.

If you attached to the floor probably a minor (sign off by A&P) of course it is the A&P that has to agree.....it is certainly subject to interpretation....for a one off it probably is ok.... if you plan to market it that is certainly another can of worms.
T

At first I was, just do it and don’t tell anyone. But after thinking about it, I’m going to say, don’t touch it. Seat belt structure is going to freak out any FAA person. You are changing something they consider life or death, it’s a DER/ACO approval. Reality is it probably won’t hurt anything, but something inventive might get the wrong attention one day. I have done plenty of fuzzy things, but keeping it under wraps is the hard part, especially if it’s a good idea. I would find another spot for the fire extinguisher and keep whatever you do easily reversible without a mechanic. If you want to go all the way with a DER, start selling them with the other stuff.

There is a flow chart here. https://www.faa.gov/documentLibrary/media/Order/Order_8300.16A.pdf
There is an internal document that you can find on the web that tells what area can be field approved, DER approved, or has to have full STC by a manufacturer approved.

I wouldn’t sweat it…..it sounds like it can be removed quickly and everything is back to conformity if it becomes an issue.

I agree on not sweating it if it was me. I would have probably already done it. It’s one of those things where if I was going to do it, I would. If I wanted it to be right with paperwork then I would. Sometimes I would do both. When it’s asked out in the open, the most conservative answer is the right one.

Thanks for this. I have a 182p but still good info.

Im looking to make this and others a product to sell so it seems I need to read up on what is allowed that does not constitute a major mod as I have tons of ideas to outfit my plane to make things easier and better for carying items when outfitting it for camping and such.

OK so my next question... Is there a DER on this site willing to answer a few questions over the phone? Or anyone have a recommendation?

Bob Halvorson (IIRC in Thousand Oaks, CA) is the guy who did my DER work on the Taylorcraft skylight and the EZ Flap project. I was 100% satisfied with his expertise and guidance and dollar value. Highly recommended.

Now if you had some math to show your longer bolt etc is still IAW the TSO, then you might be ok.

But i would not just start messing with it when an email/call to fsdo is free.
S

If i read the description correctly your replacing a washer with a plate that will carry the crash loads of the fire extinguisher added to the loads imparted by the pilot to the original designed belt attachment brackets. I believe analysis of the original bracket system with the additional extinguisher loads is is in order. And if shown to be adequate by a DER a 337 field approval can be obtained. Provided adequate documentation is provided for the original 337 so that The friendly aviators association does not expressly limit it to the original installation, this approved 337 cold be used on the same model aircraft and other cessna aircraft having the same belt attachments.

I have seen many, many Cessnas with the fire extinguisher bracket screwed to the floor between the front seats. Most use Rivnuts in the floor, or even better, anchor nuts, and machine screws to retain the bracket. Holes though the carpet for the screws. Never had a government inspector make any noise over that.

Don't mess with the seat belt hardware. Inspectors take a dim view of homemade modifications to such safety equipment. In fact, sometimes I have found the wrong bolts in critical places. The shoulder harness attach bolts are supposed to be NAS bolts, much stronger than AN bolts, but I find AN bolts there. 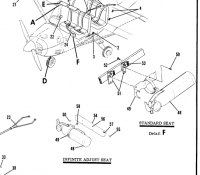