Mohawk Aero Corps has completed and successfully test flown (after extensive ground running of the power plant) 2 hours off of their newest Yamaha conversion engine offering: the 2011 - 2018 model years for the 160HP Apex EXUP snowmobile engine, with titanium headers incorporating an ECU-controlled valve for variable exhaust pressure tuning throughout the power band, resulting in more mid-range as well as top-end power.

Mohawk Aero Corps (MAC) has been building Yamaha Genesis (YG) 4-stroke (snowmobile engine) conversions longer than anyone in the business. By now there are more than 200 Yamahas flying here and abroad.

In 2012 MAC built and flew the first successful (4-cycle) YG 4-cylinder, a 145HP engine taken out of a 2003 RX1 with 2,000 miles on the sled, and installed on an Air Command gyroplane. That YG4 engine is 998cc, liquid-cooled, with both electric and liquid carb heat. The installed engine with electricals, oil tank, radiator, all the plumbing, starter, and intake silencer plus complete exhaust less muffler weighs just 165 lbs dry - the same as a 100 HP 912 Rotax, and at least 20 lbs lighter than a 110HP 914 which can only be run at WOT for a few minutes. The YG4 engine runs at just 2/3 its rated RPM at WOT, power band determined by the cam grind and timing and reduced to accomodate the stock sled clutching. It sports an internal gear reduction to a countershaft equipped with a harmonic damper that Yamaha spent two full years developing before bringing the engine to market.

It is like Yamaha was thinking of aircraft when they designed this beauty! An internal rubber harmonic damper - what more could you want in an propeller-driving engine?

The Air Command YG4 became highly regarded and very well known within the gyro community instantly. The Atlanta MIDO rotorcraft division ( 3 gentleman lead by the former chief engineer of Eurocopter) visited the MAC facility at KCJT, and upon providing certification the leader gave Greg his business card and said, "This is one of the finest home-built aircraft and engine conversions I have ever seen. The only thing I would suggest is that you clean up the stock wire harness once testing is complete and you determine what can be safely stripped out and eliminated. Here is my card. If you ever have any problems or get called by the FAA for anything whatsoever, tell them to call me."

The following year the builder/pilot and owner of MAC was voted to the Board of Directors and then Secretary of the national Popular Rotorcraft Association, the oldest and largest rotorcraft club in the the world, established in 1956 by Dr. Bensen, designer/engineer/builder of the first personal aircraft type gyrocopters. (A gyrocopter is an open-frame machine, sometimes called a "stick gyro", whereas a gyroplane is enclosed with a fuselage and sometimes a full canopy. The FAA recognizes only the term gyroplane in their documents and regulations, however. Eurotub is a name coined by the gyro community to describe the later, far more expensive models of semi-enclosed gyroplanes which became first known in the late 1990's, made by Magni of Italy, and skyrocketing in popularity since 2010.)

In 2017 MAC built the first Yamaha Apex 150HP YG4 conversion kit for Steve Henry, who went on to win every STOL race and the vaunted Grand Champion Award at Oshkosh 2018.

In 2019 MAC built and sold the first production Yamaha Phazer YG2 80 HP, installed on a Quicksilver float plane owned, built and flown by Gil Audibert of New Orleans. Video of the aircraft taking off and landing on the waters of the bayou can be found on the MAC's Youtube channel <GTGyro>.

Coincidentally, Gil and Steve both own crane companies! I know, right - what are the chances?

No other design engineer/builder has pioneered and/or produced more different types of complete YG aircraft engines.

Special aircraft wire looms available for all kits offered. No one can beat our prices, our history, our wide range of engines supported, nor our rigorous test requirements and regimen.

Email Info@MohawkAeroCraft.com for sales and information. 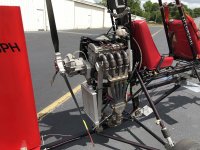 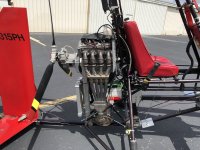 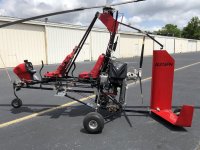 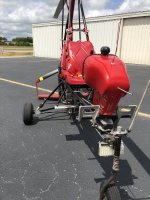 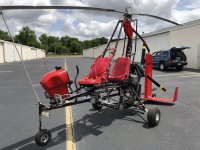 Video of the Yamaha 160 HP EXUP flying at CUB airport in Columbia the other day, sounds great - MUCH quieter the 150 HP IO-320 belonging to my buddy that took off right after the gyro did, although Scott didn't catch it on the vid <sigh>. Additional info on the Youtube post. Enjoy.

We've been flying the Yamaha Genesis 4-cylinder family of engines w/o a hitch since 2012, in dozens of aircraft and rotorcraft.

Finally weighed the machine, it came in 132# lighter than it was with the 130 HP Subaru, just 618 pounds dry calculated, 670 lbs actual with 5.5 gal fuel (1 hour plus 20 min res), coolant and oil, as measured just after the flight shown, all fuel first drained and then 5.5 gal added back for weighing.