OK, so it's not called for in the plans and is just an optional procedure. Really needed? Depends on the amount of engine vibration and interaction between cowling and engine.

BJC said:
Guys, I'm not building an RV, and my plans / instructions do not indicate the holes you have recommended.

I'm not disagreeing with what you are saying wrt the RV, only that my installation is different.

I don't know what you're building, but assumed that it might be a scratch-build or something with little detail in the plans, since builders of the more common kits that use hinge stock on the cowl don't have issues with distorting the cowl when installing the hinge stock, as long as it's formed correctly and held in place properly while drilling. Simply squeezing the rivets won't stretch the hinge stock enough to affect alignment.

rv7charlie said:
I don't know what you're building,
Click to expand...

Sorry for the confusion.

There is a photo of the Glasair that I am slowly building in post #146. The Glasair uses piano hinge to attach the vertical, almost straight, portion of the lower cowl to the fuselage, and to tie the horizontal joint between the upper and lower cowl sections together. The plans call for Dzus fasteners for the bottom and top of the cowl to fuselage attachments. My question related to the top of the cowling to fuselage attachment where, contrary to the plans, I am using hinge.

Rivets squeezed and rivet heads covered with one layer of glass. It did not have any noticeable distortion.

Thanks to all who commented. 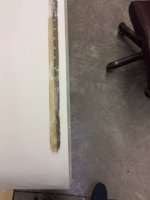 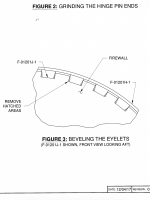 Beveling the eyelets is a must on curved surfaces.

Mark Z said:
Beveling the eyelets is a must on curved surfaces.
Click to expand...

A friend / former co-worker taught basic wiring techniques at SnF for many years. He could apply lace cord faster than most could apply ties, and his looked much better.

We always practiced “clean as you go”. I hate working in a mess; mine or someone else’s. 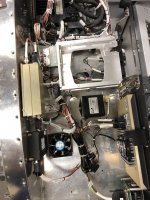 The beauty of hinge to hold the cowl on is when lining up to run the wire through, and it’s slightly miss aligned, getting the wire through your finger is easy. It lines up perfectly to skewer.
You must log in or register to reply here.
Share:
Facebook Twitter Reddit Pinterest Tumblr WhatsApp Email Link