What scale and composition of your favorite Warbird would you purchase?

Hello Everyone,
This is a question I've been kicking around ever since I discovered the Supermarine (Texas) ~75% scale Spitfire. In the youtube video comments people asked "Why not just do 100%?" Their answer of course was that the weight goes up dramatically and they say you need a huge engine to power it and balance it.

So I've created a poll, what would you actually spend your money on?

There will have to be a few assumptions:
1. You can afford all versions (but you're not Bill Gates)
2. Cost of operation is relatively similar, i.e. the 100% is not powered by a real warbird engine like a Merlin
3. Cost to purchase 90% is say 10-15% less than full scale
4. Time to build is within say 10-15% for a given composition, i.e. 90% metal compared to 100% metal. (composite being substantially quicker than metal to build across the board)

Would you go all out for a full scale metal or be more practical with a slightly smaller, slightly cheaper version?

Reading your posts over the years, I'm sure some of you guys have some thoughts on this. What do you think?
Justin
T

What are your estimated costs? What would you power it with? 100% is a big airplane. 90% is still a big airplane. I would always go 100% if I had the money but my money guesses are in the beginning turbine cost range.

100% would need a lot of money. If you want decent performance, a big engine. Yeah, 100% would be nice. If you are that loaded, just spend the $3 million to buy a real one! A 100% warbird that tops out at 150mph would be just wrong.
The best scale depends on the aircraft. A Spitfire has a pretty skinny fuselage at full size, so it is going to look rather cartoon if you go much below 90%. I'm working on a Hurricane 'Mk103', at 66%. It is has a far larger cockpit in full size than a Spitfire so shouldn't look too deformed at 2/3 scale. Many warbirds, such as the Spitfire, have the pilot a long way from the cg. On a light plane, this can create issues as pilot weight varies. I picked the Hurricane for my 103 partly because I can put the pilot cg very close to the aircraft cg. If I was building a 2000lb aircraft instead of a 250lb one, that would not be such a consideration. I have not been impressed by the scale Spitfires with their cockpits moved way forwards. They look like bastard GA aircraft with an elliptical wing to me.

Looks are very subjective. What I think looks great, makes others shake their heads in dismay. And vice versa. Build something that YOU like. Pay more attention to technical criticism than aesthetic.

composite being substantially quicker than metal to build across the board)
Click to expand...

Is this true?
Or is it just an unformulated distillation of the concept that more expensive tools and a better, more rounded skill set are necessary for metal?

A late local chapter member built an all metal (IIRC) 7/10 scale Stuka in his garage, years ago. Was always a big hit with YE rides, even though the kid sat backwards in the gunners seat. Dick flew Liberators over the hump during the war, but his German heritage made the Stuka interesting as a project. It was crashed (& burned) shortly after purchase by a new owner.

Composite designs (clean sheet) can clearly be faster with minimal tools, and a low-bar learning curve. Replicating a complex metal design, with some integrity toward the original, might well favor metal even for convenience and overall speed depending on skillset and machinery available.

Aviacs said:
Is this true?
Or is it just an unformulated distillation of the concept that more expensive tools and a better, more rounded skill set are necessary for metal?
Click to expand...

To be true to many of thee designs requires (IMO) many panels with compound curves. I think it is fair to say it is faster to make those in composites, esp if a mold is available, than in metal (English wheel, plannishing, etc).

If we're talking a full scale or near full scale, having looked at the work of the restoration shops, the only way metal is faster than composites is if you cut big corners on the metal construction philosophy from the originals, have a massive metal shop ready to go and plans; and haven't done any composites work before in your life and would have to start from first principals.

I mean examples will exist to disprove this but they are the exceptions I'd wager.

In any case if the budget exists either way a 100% is the way to go for a few reasons mostly in that I must imagine it makes the job easier if you can leave well enough alone for a lot of the design.

And unless an affordable engine with ample power exists, an original engine or another warbird era equivalent is still likely to be the best method unless the 100% shell can dump significant weight out of the tail to balance a smaller engine... And now it's more lightly loaded which may or may not screw things up from a design perspective which means may as well do that 90% we were talking about.

There's so many choices. There's never only one right choice until you've gone further down the path. Choose the ones that resonate with you and work it from there, other people's opinions may or may not grasp all of your thought process and serve to just mud the waters more often than not.

But yet we are human and love seeking those external perspectives anyhow.

Best of luck no matter what we say.
J

Thanks for the input so far guys. I guess I should have clarified on the composite I just meant it being received in a more finished state so you didn't have to have quite the facility or layup skills as something built from scratch, say.

The Texas Spitifire is at $175k cost plus engine, etc and even at that price a lot of things are optional. So cost would be substantial but I put it as an assumption that you could afford whichever version. Somehow the Titan P-51 is much cheaper at roughly the same scale but still much higher than non warbird homebuilts.

Scott I've been following what you guys are doing, looking great so far!

If money was no object I’d want to try and hunt down one of those dead-nuts 100% P-51A kits that were made a number of years ago and finish it with an Allison and six months of polishing.

Since money is an object, I could be pretty happy with an Isaacs Fury.
D

A couple years ago I started drawing up a P-47 in I think it was 84% scale. It was going to be composite with the option to add a razorback and build either model from the same tooling. That size fit a R-985 perfectly. You can get a 985 overhauled for the same price as a lycoming and have 450 h.p.

I guess I should have clarified on the composite I just meant it being received in a more finished state so you didn't have to have quite the facility or layup skills as something built from scratch, say.
Click to expand...

Well if you are allowing kits, then; another chapter member built a Stewart 51 Mustang. It didn't take him all that long to build the airframe. He essentially completed it, even bought the 4 blade CS prop. Then got cold feet with the engine options (auto conversions with re-drives) and sold it. He then completed a Murphy Moose with the Vedenyev radial. (Another all metal AC) Could even be vaguely related to Beaver => sort of potential warbird replica with the right paint scheme. :^)

If some sort of "fast build" kit is allowed rather than scratch build, and your airplane fairy is still endowing the funds, i think it's a no-brainer - metal all the way.

FFVS J 22
In metal and plywood as the original. Or with composite substituted where that make a quicker/easier build. Lycoming engine, either a 540 or 720 should be possible to make fit. Built lighter than the original the performance should be ok for a replica, if not at the level of the original.
D

Tiger Tim said:
If money was no object I’d want to try and hunt down one of those dead-nuts 100% P-51A kits that were made a number of years ago and finish it with an Allison and six months of polishing.

Since money is an object, I could be pretty happy with an Isaacs Fury.
Click to expand...

The man behind the "A" model was Gerry Beck. He was a friend of mine. We lost him in a crash at Oshkosh.
They still have enough parts to build ten "A" models and plan on going back into production. In fact Gerry's original plane should be back flying in a couple of years.

I think prices at first glance are almost irrelevant. One member here has about twice of that Spitfire kit in his Titan. He has gone overboard but you are not building a flyer for $60K. Build anything WW 2 at full and it’s millions. Kit volume vs cost is something too if the company is going to sustain salaries. I bet not as many of the Spits are produced as the Titan. I saw this on a trip; the owner “cheapened” out and put in an Allison in. 100% scratch built. But he had also built a Thunder 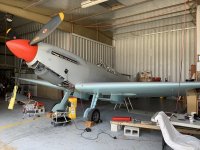 Mustang, Pitts M12, 2-3 Lancairs. I think 9 homebuilts in all. At some point T-6s make more sense. Lots of fuel but it does one thing that a homebuilt cant, get you a seat in the real deal. 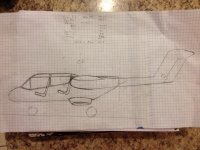 Deuelly said:
The man behind the "A" model was Gerry Beck. He was a friend of mine. We lost him in a cash at Oshkosh.
Click to expand...

I remember when that happened. It was an absolute tragedy and I’m sorry for your loss.
A

I want a Mosquito, so composites are a no-brainer.
And even 90% would be a huge bird, but you did say I could afford it, so hangarage won't be a problem.

Twin v8's with re-drives for power.

Presumably you could analyse the Mosquito's ply-balsa-ply monocoque, and design a carbon-foam-carbon replacement.

Mosquito would be a no-brainer composite job unless someone was a real keen woodworker and comfortable with the forming methods used. And I'd just as soon say do it full scale over even 90%, unless you are prepared to loose the bomb aimer's perch up front and stick to a basic 2-seat tandem configuration, at which point you can do some other birds with a bit less loss of the magic (Like an F7F)
V

Always an interesting topic. I have a 70% P-39 cockpit with stub wings and a 55% ME-262 cockpit hanging in my hangar. Also wrote an article about the process of scaling up RC plans for Experimenter
magazine a few years ago. From building these two cockpits I would say that 65% is as small as I would build for an average sized pilot.

The ME-262 is mostly made from double wall corrugated from a giant screen TV set box. Also a good source is 4 x 8 sheets from Uline Office Supply. The skin is heavy cardboard stock that is used in the construction industry and available from Home Depot or Uline. 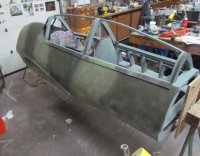 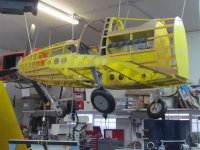 ScaleBirdsScott said:
Mosquito would be a no-brainer composite job unless someone was a real keen woodworker and comfortable with the forming methods used. And I'd just as soon say do it full scale over even 90%, unless you are prepared to loose the bomb aimer's perch up front and stick to a basic 2-seat tandem configuration, at which point you can do some other birds with a bit less loss of the magic (Like an F7F)
Click to expand...