I'm thinking yes, but I have not really looked into the particulars yet. A buddy has a tank/trailer on the airport and we do have a bulk fuel outlet in town, so it looks doable. Will have to research the options.

Data was interesting: (and keep in mind this is very off the cuff, raw data) level at 11.5 MSL and normal LOP setting, I took a look at the difference in engine behavior between the alchohol laced auto gas and the 100LL. As expected, with a constant FF of 10 GPH (open loop EFI), the chemically "more lean" auto gas drove the expected behavior:

OK, flip the SDS LOP switch off and return to best power mixture/ignition advance and I get:

Ok, the auto gas is leaner at the same volume than 100LL, no surprise there, but what if we do a "constant EGT target" to see what it does to FF?

With the 10.0 GPH and 1345 LOP EGT as the baseline for 100LL, how much more auto gas do we need to throw at the engine to match the 100LL EGT? Its a simple thing to just tweak the manual mixture knob on the SDS EFI to add or subtract a percentage of FF. So with the engine running on car gas again, I richened the mixture until I hit my target EGT of 1345. Resulting FF: 10.5 GPH.

Now hold on a second, it's going to cost me a half gallon per hour of fuel economy to save a few cents at the pump? But thats not the full story, and this is the part that does not make much sense -

Anyway, thought the group would like the info.
T

My guess about the same speed is there isn’t that big of a power loss that the engine sees leaned out at altitude with the same FF. Probably at sea level the spread would be bigger at full rich. Flame speed and speed of combustion has to be different than 100LL and it’s done burning where 100LL is still “hot”.

Maybe the LOP has more tolerance than ROP. It is a “different “ fuel even if in the same family.

Good point. Will try get some data at sea level, best power.
R

Maybe you aren't asking the right question(s). Given the same HP/performance at the same fuel flow, why are you asking about how much extra mogas it would take to *increase* your EGT to avgas levels? I'd suggest asking instead, "Why are my EGTs lower with mogas (causing lower stresses on my engine), when the performance is the same as with avgas?"

I think that the answer is...

Octane enhancers slow the burn of the fuel, and slightly displaces some of the energy content in the fuel. There are *slightly* fewer BTUs of energy in avgas than mogas.* The higher EGT with avgas is because some of it is burning in the exhaust, while most/all of the mogas finishes its burn in the cylinder, producing power.

*edit: I probably should have said that for the same fuel blend, the higher octane fuel has lower BTUs. I suspect it's true for av vs mo gas, but haven't verified it. However, your testing seems to validate at least equal BTUs in the two fuels.

You *might* be able to get the avgas EGT as low as the mogas EGT, by advancing timing more when burning avgas. But the research that DanH has done on the angle valve engines (and, IIRC, yours as well), indicates that advancing timing beyond a minimal level on these big barreled a/c engines doesn't buy you any increase in *power*. To take advantage of the higher octane rating of avgas, you'd need to raise the compression of the engine. Any octane in excess of what's required for safe engine operation is an unnecessary expense, and *can* make the engine slightly less efficient, due to displacement of BTUs by the octane enhancer. Wikipedia has an explanation that makes sense to me, as a 'layman':
Octane rating - Wikipedia

So, take the win?

Oh, I'm taking the win, trust me. The mixture/EGT match experiment was just to satisfy my curiosity about the alcohol laced fuel - It makes sense that it would be more lean (at the same volume) than straight gasoline -and it was. Clearly, the flame speeds of these two fuel types are different and theoretically will like different timing. That's probably the part of the puzzle that needs to be factored in to the mixture/EGT relationship, but thats for another day.

At this point, I know I can load any level of gasoline from the corner gas station into the airplane and it will eat it just fine with no discernable change in performance. Thats a big win in my book.
R

I just didn't think of it as a rich vs lean question. Sure, the EGTs are different, but I suspect that our perception of EGT as an indicator of rich/lean in a/c engines is driven by its *indirect* indication. More of a complete vs incomplete burn, modified by grossly incomplete burn, as we go into the range of cooling with fuel (so rich the fuel runs out of O2 & can't burn; it just evaporates and cools). If you keep the mixture the same, but roll timing earlier or later, EGT will track it, and so will CHT, in the other direction, right?

So you're running 'regular regular' in these tests? 87 octane? Can you refresh my memory on compression? Parallel or angle valve cylinders? Fuel delivery method (dual electric pumps vs engine driven pump)?

Sure wish this was in a separate thread, to make it easier to review.

Thanks for documenting your experiences. I'm currently running E-free premium in a parallel valve IO360, and I'm sorely tempted to go to E-gas. Just not confident to do that while running the engine driven pump due to vapor lock issues; it's marginal with E-free in the hottest parts of summer here in the Dirty South.

It makes noise! Wouldn’t stay running and battery needed a charge.
I had put the trickle charger on but It did not do its job.
Need to pick up another charger for the hangar.
I figured out why it wouldn’t stay running, some moron put the mixture arm on backwards. Would run on the prime though. Sounds like it did when I raced it years back.

Slightly OT (certified airplane), but as of yesterday, I am one fully ADS-B compliant mofo ! Now to just deal with that '*#&@ expired registration......:-\

BJC said:
Where I live, we have the second worst internet access service in the world,
Click to expand...

From 2011 to late 2014, I lived where I had the worst internet access in the world- rural Bavaria! Downloading a single 45 minute episode of my fav TV show at the time over iTunes was a 12-hour affair!

I counted some stall speeds and checked that it fits into a normal sedan when wings off...so the transporting to the airfield will be easy. Storage hanging from the ceiling in a flat will be cool.

Finished all the fuel lines aft of the firewall, including getting the two SDS fuel filters installed and putting in brackets and p-clamps to hold it all. I’m probably going to go back and remove the previous fuel filters and shutoff valves as they serve no function now, and it’ll save me half a pound or so.

Finished up a lot of easy work on fuselage parts prep. Going to dimple skins tomorrow!

For reasons that are not obvious, engines generally run slightly more efficiently on E10 than on E0. Despite the energy drop, they tend to get a small improvement on BSFC.

pictsidhe said:
For reasons that are not obvious, engines generally run slightly more efficiently on E10 than on E0. Despite the energy drop, they tend to get a small improvement on BSFC.
Click to expand...

Is that all engines? Or, engines that are optimized for E10?

I read one study that talked about an experimental HCCI engine that was boosted and running 14:1 compression that had pretty significant "thermal efficiency" improvements with E10. But, I wonder if that holds true for a 7.5:1 engine with a 2,750rpm redline. I've also read that NASCAR runs a specially blended ehtanol fuel.

I believe that it is most engines. Old and new. It isn't a big difference.

Toobuilder said:
At this point, I know I can load any level of gasoline from the corner gas station into the airplane and it will eat it just fine with no discernable change in performance. Thats a big win in my book.
Click to expand...

Big win indeed. You can now have a tank of inexpensive auto fuel in front of your own hangar, fuel up the night before, and just blast off on a XC trip first thing in the morning without having to go anywhere and stop for fuel for the first leg. The savings in time and dollars for that alone is probably significant. If there's any way you can commute to work in the airplane a few times per month, then the fuel tank and pump setup is a write-off

Or perhaps the fuel tank can be written off as a startup capital expense of a new company, "Toobuilder's On-Call Aero Engineering", that offers customers a trained engineer showing up at their airport coffee shop, slide-rule in hand, to participate in aircraft development during the all-important napkin sketch stage... on actual napkins at the coffee shops (where as we all know many of the greatest aviation achievements have originated)!

DImpling skins today. Stared at rivet call-outs till blue in the face. Still managed to dimple a row of AN470 rivet holes. Had a helper in the shop today. Came with his own PPE! 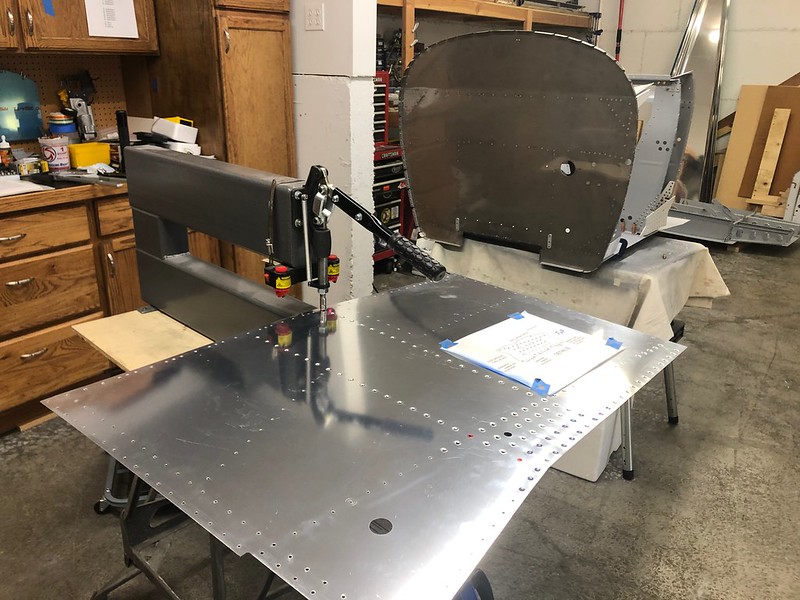 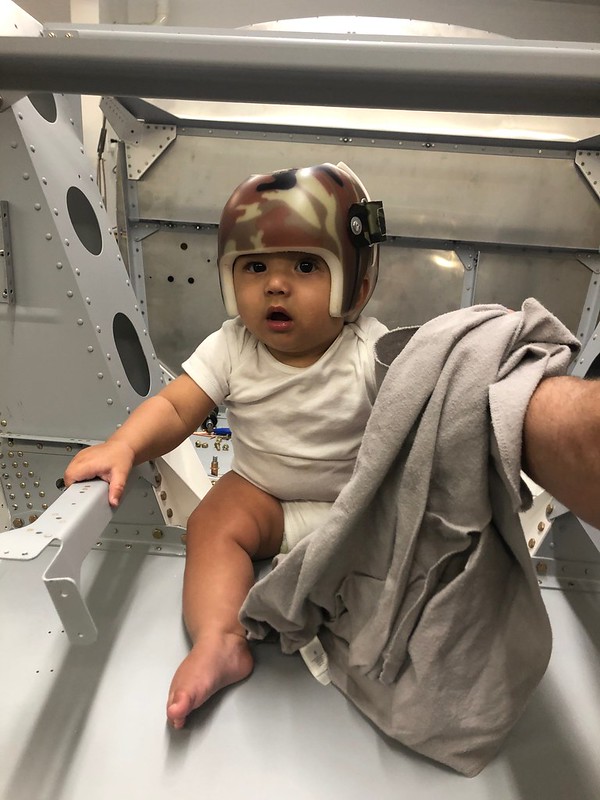 It never looks like I accomplish much but tonight I got the side pipe curved and fitted to the Gipsy Moth. 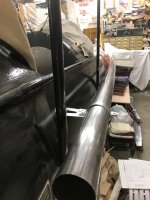 Tiger Tim said:
It never looks like I accomplish much but tonight I got the side pipe curved and fitted to the Gipsy Moth.View attachment 101875
Click to expand...

There's a Gipsy (oops!) Tiger Moth restorer here at KAWO, Liz Matzelle. She has gone a far as recreating bakelite switch covers and scrounging for parts world wide. I don't know if I'd have the patience.