Finally got the air filter box to fit relative to the throttle body, cowling, engine mount and firewall. Tacked it in place with some resin / cabosil in preparation for removing the lower cowl, and proceeding with placing and installing the air filter mounting ring and laying out the cut lines for the NACA inlet.

All this would be easy if the directions in the construction manual worked and the parts fit as advertised. View looking up through the (unfinished) engine cooling air outlet, toward the post side. 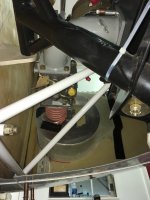 Looks very much like the configuration I had with the Hiperbipe, but I went with a pitot inlet rather than a NACA duct. There will be some "free" ram pressure if you switch to the pitot now.

I have transported my repaired Lake fuselage back home this week. Does this count here?

Toobuilder said:
Looks very much like the configuration I had with the Hiperbipe, but I went with a pitot inlet rather than a NACA duct. There will be some "free" ram pressure if you switch to the pitot now.
Click to expand...

Yup, but at this stage, I’m just trying to get it done per the proven method.

If I were 40 again, and retired, there are lots of mods that I would be making.

Installed the new fuel selector in my RV-8 (LEFT-RIGHT-OFF replacing LEFT-BOTH-RIGHT-OFF) along with the much improved mount and braided flex fuel lines: 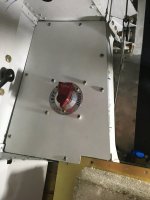 I also installed slit rubber hose chafing gear around the wire bundle and the fuel line that goes underneath it: 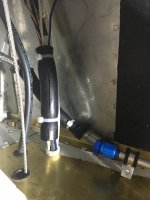 This task is not quite complete. Also you can see the right tank connection that has to be made.
Last edited: Jul 12, 2020

BJC said:
Yup, but at this stage, I’m JUST trying to get it done per the proven method.

If I were 40 again, and retired, there are lots of mods that I would be making.
Click to expand...

I get it. Those little modifications really add up fast.

That said, once you are flying it would be relatively easy to make a splash of the cowl OML and temp install an external divergent duct with the pitot inlet right up against the prop. This duct would enclose the NACA inlet system, so it would be all external and ugly, but it would quickly validate/characterize any MP increase.

If done right, this thing could simply be attached with speed tape - you wouldn't even scratch the paint. Would be a good experiment for the Test and Improvements section.

There have been several Glasair induction system mods, but I know of only one that actually measured the performance improvement over the standard system. That mod, on a -III, was to reduce the size of the NACA inlet to more closely match the airflow demand at fast cruise. That was successful. I don’t recall the exact speed improvement, but it was around 4 to 5 knots. My project is a -II, so I would expect less gain. That mod will be easy to make on a flying airplane.

The other mods that I have seen were attempts at ram air, but none used a probe close to the propeller.

Well, with a really fast airplane the "trick" it seems for stuff like this is to balance the drag increase from the increase in wetted area vs the increase in power due to ram air. Im running into this with the Rocket. Admittedly, my "new" cowl is rough and covered with discontinuities and gaps... The sailplane guys here would probably see it and become physically ill. Anyway, my cooling performance is better than expected, my inlet design is also better than before (still need to finish my report in Tests and Improvements), but the airplane struggles to match the speed and FF it had before. There are huge, obvious areas to clean up WRT drag reduction with my cowl, but I hoped for a better initial try. Ill get there, but the point remains: the faster you go, the more the little details matter. 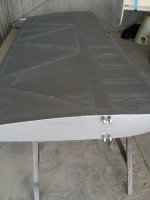 Completed sanding the pinked edges of the under side of one wing. The wing team is going great guns! Swing by 2J0 and visit.

So I had my "new" wing struts fixed today, because I horrendously f***ed them up the first time. I measured twice and cut once, but in between those two steps there was an episode of stupidity that I'm embarrassed about.

I measured the wing struts before I cut them apart. Then I wrote the measurements down on a piece of paper. Then I went to my friend's hangar to cut the 4130 tubes (because his band saw was a 1930's or 1940's vintage saw he bought from Lockheed Surplus in Burbank, and it may have been used to build Amelia's Electra, or LeVier's P-38, or Gary Powers' U-2.... and it's a way more powerful saw than mine).

I thought I had remembered the measurements well enough, so when I didn't have the piece of paper at his hangar I figured I already knew the measurements. Well I was wrong, and when we went to assemble the airplane the $!($* struts were 6 inches too short.

So yesterday I spent the day cutting extensions for the strut tubes and internal sleeves for the extensions and drilling rosette holes, and cursing like a drunken sailor in a jail cell.

Today we tacked the extensions on the struts, then we assembled the airplane, then we did as much measuring and leveling as was possible under the circumstances, THEN I stood back and stared at it like a model airplane builder for half an hour, then finally I had the guy tack the upper strut fittings.

So with the exception of one rod end bearing to adjust the washout on one wing, the dihedral and twist is locked. I gave it a couple of degrees of washout (because it's a very high lift airfoil and I'll be mostly flying it in close proximity to the surface, the hills, the trees, etc.). It kinda wanted to have a couple of degrees of dihedral, which looked about right. My time and access to the TIG welder's hangar, and the number of people there to help with wings and ladders and plumb bobs was minimal, so I had to get as close as was easily possible and get it done. Anything else will have to be trim tabs.

It's worth noting that this is a 70-75 mile an hour cruise speed airplane, and definitely not a "long cross country" kind of machine. If this was a 120-150 mile an hour airplane, or an A to B cruiser, I would have been more insistent on doing it differently.

Over the next couple of days he will dinish-weld the struts, then it's off to powder coat. Than after all that, I'll be looking for, or making, streamline strut fairings.

With the temps in the mid 90’s outside I’ve got the AC in the garage set about 80.
The Tailwind had taken second place to the Bipe but I can’t get up there for a couple weeks.
So I continued with reassembly of fwf. Pulled the engine loose and added washers to the Conical mounts. Ran the wiring for the starter and alternator. Hooked up the p-leads cleaning up rough areas and loose ends. Ordered the fittings I need to finish the fuel runs and the oil cooler. Cut the tailpipes on the crossover exhaust from a Twin Comanche and cleaned everything to start welding, went to turn on the Argon and it was on. #%^*%^. So I’ll refill a bottle tomorrow in my travels.
Feel like I made some good progress. The list is getting smaller. New brake lines, finish the sump drain, mount gear leg fairings and pants, baffle and cowling.

We wanted to talk of how we wrapped up painting this weekend, but we are still at a standstill due to the steam sauna defining our region here by the coast. We are hopeful we can make some movement this week!

Taking advantage of the cool morning air I put another 1.0 on the clock in the Rocket. No issues in the flight, clean belly upon landing... Just grinding off the hours until I can really start working through the engine/airframe testing

Examined tail tie down attachment, and will order a new one. Started removing the old antenna coax for an ELT that is no longer there.

Well, so much for a trouble free flight... Post flight found a cracked exhaust stack. Pipe was more than 75% broken. Burned cowl... Almost lost the tailpipe. 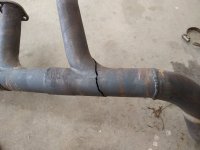 And this ends my experiment with header wrap on this exhaust. Sometimes it works fine, but with a "log style" manifold like this there is just too much concentrated heat.
T

Yep that’s a good one. I have always been scared to wrap a whole exhaust on an airplane. Local heat protection, sure.

Did you see a bulge in the header wrap when you got back, or did you remove it for a paranoid post-flight look-see?

Had to start moving forward on making my own formed aluminum trailing edge.

One flap had a cracked trailing edge, probably hangar rash or ham-fisted ground handling during the wing strut fiasco. Both flaps and both ailerons had wavy trailing edges from fabric tension, but I was just going to leave that, because it's a desert beater airplane. But a cracked and broken trailing edge, in the prop arc, had to be dealt with. So I removed the fabric from the flap, and found a rather minimalist trailing edge, two thin strips of plywood glued to the ribs. The fabric was strong enough to warp and twist the wood, and not strong enough to prevent it from getting cracked. I didn't want to do a "wood repair" and have it no better than it had been.

So I decided that the pre-formed aluminum trailing edge from Aircraft Spruce, flying on literally thousands and thousands of certified and experimental airplanes, should work just fine. Aircraft Spruce didn't have it at either warehouse, it will be there "within a few weeks". Oh, by the way, the ten foot pieces will cost $22 apece, and over a HUNDRED #*(!*@# DOLLARS to ship from one side of Los Angeles to the other, once I've waited the few weeks.

So I called "Air Conditioning Bob", the nicest guy at my home airport (who restored a Twin Comanche, a single Comanche, a Cessna 150, and a Salvay Skyhopper). You might be surprised to know he retired from the air conditioning industry. His old company has large sheet metal equipment, and Bob had been there for many years. Sure enough, Bob is still friends with one guy, who knows the other guy, who knows this other guy... who runs the sheet metal shop at his old company. There may indeed be several six-packs of refreshments that I have to use as bartering power, and it may well cost me as much as I would have had to pay for the pre-made material, but I can get done with this repair without having to sit on my hands for weeks.

Toobuilder said:
And this ends my experiment with header wrap on this exhaust. Sometimes it works fine, but with a "log style" manifold like this there is just too much concentrated heat.
Click to expand...

Thanks for sharing, Too.

While the wrap may have been the cause of that break, I can testify that it doesn’t take a wrap to cause such a break.