cheapracer said:
nipples on them to show where the sheet is positioned in the brake.
Click to expand...

positioned by eye? figure +- .01" ? or do you use some other mechanical aid to position the nipples?

proppastie said:
positioned by eye? figure +- .01" ? or do you use some other mechanical aid to position the nipples?
Click to expand...

NEVER had a problem, ever, due to fold descepencies.

NEVER had a problem, ever, due to fold descepencies.
Click to expand...

First time I have posted in this thread... the story begins with "Every journey begins with a single step". I purchased the plans to the VP1 last year and much of the plywood and Sitka Spruce over the Summer. Over the past two weekends I have used T88 epoxy gluing together the cores to F3 and F4. Although I have seen many VP projects starting on various components I confess I am starting on the first pages of the plans. Here are pictures of the cores of F3 and F4. 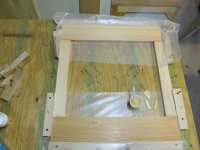 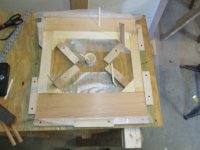 Got far enough on my electrical diagrams (and made it through the layoffs) so I ordered a pile of electrical equipment--wire, terminals, connectors, fuse blocks, empty battery cases, tools, etc. I can start laying in things like the power distribution system and a bit of the known wiring while I triple-check my "parts to buy to build my engine" list. Monday should be my first day out in the shop in a few weeks (finally!). The layoffs had me in a funk for a while so I stuck to doing computer work like wiring diagrams. Still need to finish them and figure out my routing so I can drill spar penetrations...

Getting work done with a 3-year-old who wants Daddy time all the time is a challenge...

Drilled up the forward fuselage ribs/skins and got the rest of my engine components (minus SDS system) in the "shopping carts" from vendors. Going to double-check the list one more time and make sure I have the tools and supplies needed before ordering. Hopefully the guy who's going to help me build it is here at work today so I can ping him with a few more questions...

First crank. It’s really only running on 2 1/2 cylinders. Maybe I should have cleaned and tested the plugs! Mag switch is not anchored like it should so it might have been twisting when switching to both. I was starting on left. I did not run it too long. Oil pressure good. Had to prime the pump with a syringe in the hangar before it would show anything spinning without plugs. Also visited the airplane isle at Home Depot for some tail wheel springs.
K

The painter is in possession of the elevators and horizontal stab.

I'll be finishing the fiberglass work on the empennage fairing and the spinner this weekend, and at that point, the only thing(s) left for the painter will be those parts, the fuselage, cowling, VS, and rudder. At this point, those are the only items which will have any color other than white on them...

Not exactly a "today" post but in the last few weeks I've done a lot of ADSB work in anticipation of the imminent deadline. I installed a GTX 330ES in a buddy's Skymaster, installed a GNX 375 in the RV-8 (replacing a GNS430 and GTX330), and then swapped out the GTX327 for the just removed 330 in the Rocket. The 330 is now functional, but still needs to go back to the factory for the extended squitter upgrade to give me the ADSB capability.

Currently I'm revising the oil cooler configuration on the Rocket and am building new duct molds. The rigid, engine mounted position worked fine per se, but suffered from the designers fundemental oversight of not allowing enough room for air outflow. It cooled well enough even during the break in flying of August that the oil stayed within Lycoming limits, but it was blasting the firewall with heat. It wasn't quite right, so I'm fixing it during this break in flying.

The first flight with the new engine and SDS EFI was back in August as reported here. The engine run in flying was going well and the airplane was happy. One evening in early September I took a short local flight to just add more high power hours to the engine, trying to expedite the ring break in and return to the engine tuning/test phase. Long story a bit longer, while doing a full throttle racetrack pattern at altitude over my house, the prop suddenly went to flat pitch and the engine suffered a massive overspeed (3800+ RPM). I pulled the power to idle and landed with the engine still running, but with the prop flat against the low pitch stops. Turns out the newly overhauled governor failed internally and shut off oil flow to the prop. My engine, with less than 4 hours on it, now needs another overhaul. My prop, with only 260 hours since new, is scrap. Conservative estimates put the damage at a bit over $47k. The last few months have been working with the governor shop to make me whole. If the guy sticks to his word, then I should be dropping the engine off at the shop next week.

So, the Rocket is back in "project" status again.
T

WOW. I have not heard of that happening before.

I sure dislike the weight of a counterweighted propeller, but there are times ....

Sorry about your problem, Too. Which brand of governor was it?

Toobuilder In one simple word "FUBAR" yes that news you posted Sucks! I'm glad you got down stairs fine and the Rocket is in more or less one piece. Dang those moving parts....

I was passenger in Glassair and that happened....insurance covered the tear down....not sure all the details, but the reason was the governor was missing a set screw against the shaft. Fretting melted the surface of the flywheel/ring gear mounting plate.

Appreciate the kind thoughts. And yes, this is a failure mode I've never even considered before.

But I left out the really spooky bits. When the engine ran away I grabbed the throttle almost immediately, but since I was at 200+ knots the prop was driving the engine for a bit. During the decel (which was like hitting a brick wall) I heard a distinct "ring" at the apex of the event. This engine has dynamic counterweights (torsion dampeners) on the crank and I know you are not supposed to overdrive the engine because these things have limited travel and can be damaged if they bounce off their stops. In my mind, this was the ringing I heard. A walk around showed no problem, an oil was full. Pulled the cowl and spotted broken safety wire on the prop bolts. Turns out 4 of the 6 bolts were loose. I'm talking finger tight, backed away from the prop flange, doing nothing, loose. The torsional resonance of that 3 second overspeed broke the safety wire and walked the bolts out. But wait, there's more. Pulled the prop and found that it had spot fretting on the flywheel enough to transfer metal from the flywheel to the prop flange. We're talking molten metal here, like sonic welding. Some kind of relative movement, yet no damage to drive lug holes or anything on the crank flange side.

I've never heard of this before but talking to some Reno buddies apparently it's not unheard of. One guy told me I was "lucky" - because the bolts usually just shear off!

Anyway, there's one more close call for me. I've heard of governor failures where the pilot just slows down and presses on to the airport. I now consider such an event a "land right now" emergency. I don't know how long those last two bolts were going to hang around, but it wasn't very long.

The governor was a trusty Woodward unit that I flew for hundreds of hours prior to OH. A small roll pin that holds the head on the spool valve sheared and allowed the body to exit the governor.

Toobuilder said:
The governor was a trusty Woodward unit that I flew for hundreds of hours prior to OH. A small roll pin that holds the head on the spool valve sheared and allowed the body to exit the governor.
Click to expand...

Been receiving and inventorying engine parts. Another month or so and I’ll order the SDS kit, and then we’ll be building the engine.

Also been debating the merits of a switched engine bus vs. having hard-wired injectors and an always hot engine bus...

Pulled the instrument panel, instruments, a huge mysterious switch board and integral regulator gizmo, and a big nasty rat's nest of wiring off of the Ridge Runner.

My friends who are better with avionics than me managed to convinceme that I would be far better off with a less complex installation from scratch.

Been too cold to fly... got the repitched prop back from Ed Sterba a couple of weeks ago, tomorrow's forecast to be 48° which is warm enough, so with my son in law's assistance this afternoon I pulled the metal prop back off again, put the wood prop back on, and preflighted in the hope of a quick flight after work tomorrow.

Kind of a big step backwards from last year. Engine coming off the mount.

Usually, engines don't look this good on the way TO the overhaul shop!