I’ll front you a blown out nutplate. 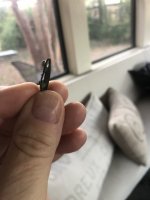 Is it a flight tested blown out nutplate?

Actually no. I removed the screw and it must have failed at this point. Blown out fasteners work really well, actually much better than coal as stocking stuffers.

While making new exhaust pipes for a 912 install a few weeks back, I needed the 'ball tubes' that go into the Rotax muffler, until I found out they're around $35~40 EACH, here in Oz. So with a bit of machining and some bits of stainless tube, I swaged up some ends for myself;

Basically pressed a larger flange, then set up in lathe with a roller and swaged back to shape.

Having done this, I later realised I needed all those little bent hooks for the exhaust springs (well, eight anyway).
Didn't even bother to find out what they're worth here in Oz, to say nothing of postage and waiting during the Christmas rush, so;

Down to 'Bunnings Aerospace' (this is an Aussie in joke, it's a common hardware chain), for some stainless nails;

Bandsaw a couple of lumps of alloy offcut, and to the press...

How does it go, 'Necessity is the mother of invention'?

That’s a nice trick with the nail.

I've been getting the bits together to pull the plane off it's gear and on its side so I can sand, fill, prime, and paint the underside of the fuselage after building the speedbrake. Last week I got the final bits needed for the vacuum bagging setup. I decided not to risk the old, well traveled Horror/Fright vacuum pump failing mid-layup, so I went down and bought a new Horror/Fright pump. Aircraft Spuce sent me some fresh consumables and Fibreglast sent some odd bits.
I have also been setting up a 3D printer, and today have it making an enclosure for the Arduino and its ancillary components. 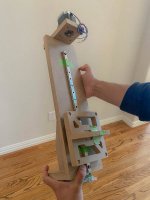 Mark Z said:
I’ll front you a blown out nutplate
Click to expand...

That looks repairable to me...

Just did an engine run on the jet and ran all the systems. Getting ready to sign off the CI and get it in the air again.

Built and installed my intercom harness. Next up is the rest of the radio harness and some other wiring.

The number 1 cylinder on the Continental 0-200 in 625MS has been overhauled and reinstalled due to exhaust valve leakage. All cylinders now are at 70 or higher. I am curious, how much horsepower is considered to be lost with one cylinder on the 0-200 that has basically dropped to zero? I know the hp loss on the VW 2180 but I haven't been able to even get a ball park estimate on the 0-200 though stating the obvious, I haven't called Teledyne Continental....yet.
Thanks,
Doran Jaffas

PS. The next plan will be to remove the wings and prep my beloved Tailwind for a complete repaint in the near future.

Did this first actual weigh of the Rocket since the major rework. Way back in 2013 it was a standard Bendix FI/Slick mageneto, simple VFR ship. It weighed 1251 pounds back then.

The loss of weight was not as hard as it sounds - the original builder did NOT "think light". All the wiring in the airplane was 14 AWG, for example. There were countless examples of builder details that were simply much heavier than required to do the job, and almost every system I touched went back as light as I could make it. I knew the dual battery scheme required by the EFI was going to cost me some weight so I tried to make up for it everywhere else. I would have considered it a victory to break even - but a net loss is awesome.

Well, the week started out good, went rough, but is smoothing out-

Pics are of the last layer of carbon with peel ply.
Used about 3oz of MGS 285 with 287 hardener for the layup, and a little bit for the micro used on the foam.

Next up is figuring out what to do about the hatch while I build the forward bulkhead and instrument tray.

Worked on a ground adjustable, fixed blockoff plate for the oil cooler on the Rocket. Test flew it and its almost warm enough in cruise now. On the way back from the flight I managed to fly directly over Statolaunch as it was on initial to 30 at MHV. Big beast.

Also worked on the jet; Closed out my air compressor and wiring and installed the nose cone. One compartment down, a few more to go.

Brought N625MS home today. 32 days away. All cylinders have good compression. A new EGT probe installed and working. Baffleing adjusted.. Great to be in the air again even though it was cold. Nextup...start prepping for new paint.

Today and yesterday, I assembled my CNC foam cutter... virtually.

A quick nap, some more overengineering, and submit an order for all this **** from McMaster. I'm super excited.

A quick nap, some more overengineering, and submit an order for all this **** from McMaster. I'm super excited.
Click to expand...


I like it! Are you working off of a set of plans or just having at it?

How large a span are you attempting to cut, and have you devised a way to adjust tension as the wire heats up?

Finished and installed the radio/intercom harness. Left a couple spare connections for a music plug etc. coiled up.
Finally crawled underneath and grounded my fuel pumps and finished securing those wires.
Got the cabin heat control cable almost fully installed and realized I now can't find the all-metal locknut that secures the end of the cable. It's floating around the shop somewhere and it was my last one. Once I find that and get it installed (or get a new shipment of them), I move on:

Are you working off of a set of plans or just having at it?
Click to expand...

How large a span are you attempting to cut, and have you devised a way to adjust tension as the wire heats up?
Click to expand...

The width of the baseboard is about three feet. The cutting length varies. 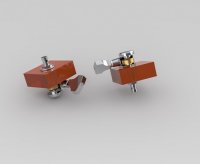