Built the second display harness and modified the first one.

Next up is the aft canopy portion. Been putting it off long enough...

Learned the expensive way that Odyssey PC680 batteries don’t like Battery Tenders. Installed a new battery and went flying. Have a new charger on the old battery, in “repair” mode now. Will see ...

There are ways to learn that less expensively; I've run SLA/AGM batteries in my planes for 20+ years; never paid the Odyssey Surcharge. Most I've ever paid was about $65-$70, when lead prices happened to be grossly inflated. Typical price is well under $50.

Of course the cheapest way is to not own a charger. If you fly more than twice a year, you don't need one.

Just completed the first round of data review from my model testing (dynamic scale testing phase). So far, all indications look toward a good flying full-size airplane; level 1 flying qualities all around! I'll send the results to another set of eyes for a second opinion, and if all is good, the next step will be finalizing the full scale design and posturing for the build!

This week I did a lot and accomplished a little!
First of the week I worked up a plan for the canopy locking mechanism and figured out what order the bits need to go in to avoid the put-together-take-apart game
Midweek I planned to layup the bulkheads, interior panels, etc. I made patterns for. However, as my 11year old son pointed out I have been saying I need to get the fuse off the gear and jigged up on its side to be able to do the filling, sanding, and eventual painting, and the more things I put in the plane the heavier it is and the more stuff I have to pull out when I put it on its side, so I worked up an angle iron mount that bolts to the firewall using the engine mount holes and an engine stand on the front and a second engine stand at the rear.
To end the week out, I made a video to sort of introduce my project to youtubeland

Today I puzzled over how to find out what my engine mount should look like when I don't have an engine yet. Now my puzzler is sore and I still am no closer to an answer. Thinking Rotax 912. Shouldn't there be some sort of template that shows the dimensions between the mounting bolts?
Last edited: Dec 13, 2021

I’m going through annual inspection now and have uncovered all inspection panels and the IA has given me the nod to cover it back up after finding a hydraulic seep from an o ring behind a B nut. I’m finished with the left wing and everything is getting new lube. Seat rails were attacked last year. 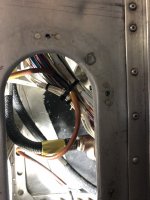 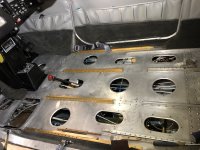 I laid out the spruce strips to laminate the canopy frames.

dwalker said:
My son and I built a new hot box for my epoxy. That is to say, I built the box and he, being 11, decided it was a great day to shoot his pellet rifle in the back yard.
I don't have the door hardware or thermostat, so just put a piece of foam over the front for now. Should have everything needed to finish it tomorrow.
Click to expand...

This digital temperature controller worked well for me. Temperature can be monitored from outside, relay turns light on and off based on your selected temp. 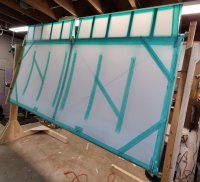 Glued the aft canopy bubble to the frame. I'm committed now... the fit is what it is and I'm just going to have to live with it! 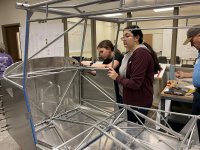 Worked on the initial strengthening supports for my wing spars. These go where the ribs mount. Had to gently clean excess glue, so slow going. It's a Fisher Horizon 2.

A silly one for me... tonight I disassembled my headset, which is attached to my leather helmet, and painted it brown to match the brown leather. Somehow that David Clark lima bean green color just doesn't have that 1930s vibe to go with the leather helmet in my Hatz.

Watching the Arnold Company videos again. Making a molded fuselage looks fascinating, and definitely the lightest way to go. But the thought of building the tube frame and matching up all the stiffened mounting points seems rather daunting.

Made some more ribs for my second wing, Wagaero 2+2. 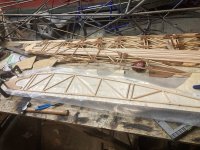 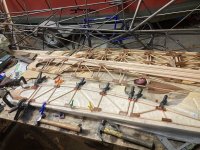 Almost got my right wing buttoned up and lubed and found a blown out nutplate on the cover that shares holes with my gear mirror. Gotta steal one from a local source and squish a couple of rivets.
M

Finished my Xmas shopping for my wife. Now I can get back to working on airplanes.