Spent a few hours on my bandsaw and mill machining the retract links for my project(s). 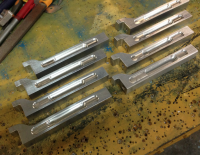 And tried my dummy wheel and pivots in the (#1) centre section. 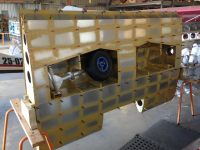 This is only a mock up wheel to test the retract movements.

I spent some quality time with cardboard and foam working on templates for the bulkhead for a header tank to attach to, measuring and making a pattern for the header tank, and some other interior panels that need to be made soon.

Since it was raining dogs and cats today, and rolling the D-Fly out, firing up the air compressor, and sanding off the bondo ladled on at some point was not going to happen. Instead something that has needed to get done for a while got done- which is protecting the canopy.
There are a couple of options for this- a spray-on coating or some fort of tape. Since "Spray-Lat" was hard to find it seemed like blue painters tape was the thing to use, but of course much like Spray Lat there are stories of the tapes adhesive taking a lot of effort to remove if left on too long, and no one wants that hassle.
So in this case a 3M product called Paint Defender, which it looks like is discontinued, was used, as I had a couple of cans left from a few years ago.
To process is fairly simple and quick. Start with cleaning the outside of the canopy with glass cleaner. Next mask the edges off, apply the supplied wax, then spray on the coating. Unlike spray paint where you go for think coats, in this case the product needs to go on fairly thick, so heavy coats are applied one right after the other to build up that thickness. Then just let it dry. Any overspray- there just is not much- is cleaned up with a little mineral spirits or lacquer thinner.
Pictures show the canopy before and after the coating has been applied.

I seem to be a turtle!
Another 90min but another rib glued last night... and another 90min glue job from Friday night....
2x #3 ribs now done.
42 pieces and 128g completed with staples removed...
Slowly ticking off the ribs....
Was hoping to get the spars started but work got in the way...

It's not so much on my airplane but for my airplane.. Then driving a 140 miles 1 way every weekend since the middle of July to work on my hangar at a place I bought up in Lake City, Michigan.

It is now 80% or so complete. That's including all of the structure. It is open ended for now and I plan to close it up next Spring. Much to do in the land phase of it such as putting in a ramp out to the taxi way, adding peegravel around the pad for the airplane inside the hangar and then planting grass on the outside of the structure but all of that in due time. My main issue now is getting the basic structure done before the snowflies in a couple of 2 or 3 weeks up there.

With few hours spent on the Dragonfly today the bulkhead and instrument tray templates were cut, fitted, and taped/hot glued in place. These were made using foamboard used for posters or display, or in my case Flite Test RC Airplanes

Since the boards are 24x30, and the pieces needed were 38" and 41", they were joined together. Using 5-min epoxy and Foamtac two panels were edge glued, taped up, and allowed to set. They were then cut using a simple Xacto knife to shape. Once they sorta fit, the pieces were hot glued and taped into place.
In the pic you can see the tape and maybe the hot glue and it would seem the finished product would work as a single piece, and it very well could. However, in the case the bulkhead will be floxed in place permanently, as it will support both the header tank and the canopy hinges, and no good comes from either of those things coming loose.
The instrument tray will be pinned to the bulkhead and bolted to the instrument panel. This increases rigidity and spreads the loads while allowing the instrument tray to be dropped down or removed without having to pull the header tank etc. for access.
Next up is a decision on a composite, plastic, or aluminum header tank. Once that decision is made- or made for me- then templates for the header tank can be made. In the meantime more foamboard will be used to create the final templates for the armrests, center console- still probably going to be cut out and moved back to the 4" width per plans- headrests, , and probably a few more thins I have forgotten

Over the last couple weeks I've wired in most of the primary power system, the lights (within the fuselage anyway), trim, transponder, and a few of the sensor inputs. I've also prepped and painted the sliding canopy frame and marked the aft canopy bubble for masking and Sika prep, and test fit seat cushions so I could mark the stick for height and grip angle.

Aiming to glue the canopy by November, and finish the non-sensor wires so I can wire the panel itself.

What I did for my project today was to frustrate myself a little more than normal.

It started off OK, spent some time figuring out how to locate the canopy while finalizing the hinges and fit, did a quick bit of sanding to see how hard the automotive Bondo is going to be to sand off, and then....

I started to go over my order to ASC which I intend to drive down and pick up in the next week or so, when of course, things get more complex than needed-

I had the templates for the elevator and ailerons printed finally, mostly to measure up so when I pick up the foam on my trip to ASC I get the right stuff and enough of it. Reading through the Construction manual it seems a little short on critical dimensions, which I suspect are somewhere on the actual drawings, of which I only have the templates that were graciously sent to me by a fellow forum member. Hopefully he can help with this as well, but for now I hesitate to move forward on the ailerons/elevator/rudder,.
C

Figured out a decent way to jack the Old Girl up, and brace her, while I re-work my shock struts.

I've got most the fill work done on the bottom of the Dragonfly canard. Then I sprayed it all one color so it was easier to see what was left. Once this is finalized, all the major fill work is complete. 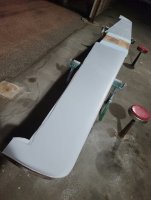 On the big project I've got the hydraulic lines finished out to the gear legs. Hopefully be doing gear swings for the first time in quite a while next week! 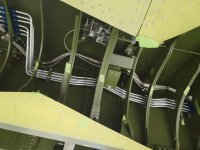 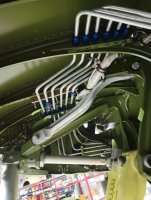 @dwalker, I'll be in touch soon reguarding the templates.

Deuelly said:
I've got most the fill work done on the bottom of the Dragonfly canard. Then I sprayed it all one color so it was easier to see what was left. Once this is finalized, all the major fill work is complete.
View attachment 116737

@dwalker, I'll be in touch soon reguarding the templates.

Awesome progress and work!
I appreciate the help with the templates!
B

As part of my condition inspection, getting to the "been meaning to do that" list. Removed the aileron trim. Never touch it except at the "center aileron trim" step in the preflight checklist. Saved half a pound! Kinda weight weeniesh of me, but that is how I got the second lightest RV-8 I know of.

Today I mocked up the tablets, dash display, switch panel, and one of the Talos units to get an idea of wire routing etc.
The past few days have been spent figuring out the setup and operations of the Talos and adsb receiver, updating firmware, etc. so it all works.

Needed some VP for inspiration, so stuck the first wing together.
Only minor tweaks to get the wing fittings pinned.
Now to start jigging the washout...