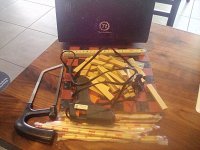 That is a beautiful airplane. Keep me posted whenever if you decide to part with it. You may have told me what you're asking but if you did I can't seem to find it and I'm a little brain damaged I guess.
B

Toobuilder's post on the "baffle ducts" sent me reading about those during my on-call weekend, decided to give it a try. But first wanted to get temperature data on cylinder #3, as that is where many people have high temps without the ducts. So took the cowl off and moved the CHT sensor from #1 to #3.

Started measuring where I would put the ducting, looking over the baffles again as I have done so many times before. Up by the front of the engine there was a gap on each side that was narrow but long. Looking at again it might add up to 1 square inch or so. I'd defiantly want to plug a one square inch hole. So filled it with some high temperature RTV.

Thanks for the encouragement.

Started figuring out the baffles - the best-named part of an Ercoupe!

I replaced the key lock on my baggage compartment door with a combination lock. Now I don't have to worry about keeping track of the key, or dig it out every time I want to grab something. Only the lock holds it closed, so I had to keep it locked. I was originally looking for an old fashioned flip-up latch like you see on old suitcases... and Stearman baggage doors, but the new lock fits in the same hole, much easier. Not high security, of course, just to keep the honest from being tempted.

I bought two locks... next project is to make a door for the front storage compartment (currently just an opening where the front pit instrument panel would be if there was one), with of course the other lock.
Last edited: May 13, 2021
D

Working on the fuel system for the Dragonfly.

The original gascolator needed a line running out the side then through the firewall to the fuel selector. I didn't like the idea or how it was going to look. Having a CNC and a spare block of 6061 I decided to go to work. A few hours later a new gascolator top, fed from the back side, was going in the plane. 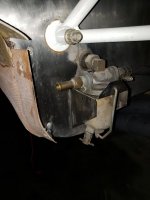 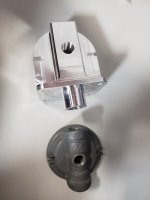 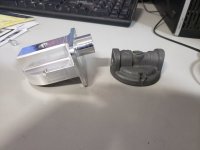 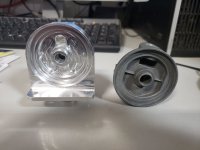 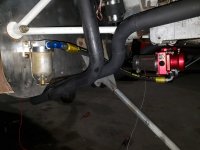 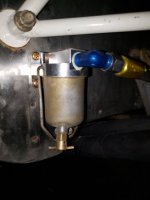 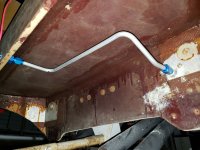 That rubber gas hose looks a mite too close to the exhaust IMHO....just sayin.....
D

Malcolm C said:
That rubber gas hose looks a mite too close to the exhaust IMHO....just sayin.....
Click to expand...

The fire sleeve, clamps, and cooling shroud for the gascolator isn't installed yet. It won't be a problem.

I'd buy one of those if I was doing a gascolator installation!

You might think about showing this to Brian at Steve's Aircraft (I think somewhere in WA or OR). IIRC he's in the gascolator business, and might sell that product for you, or license the design, etc. etc.
D

I'd buy one of those if I was doing a gascolator installation!

You might think about showing this to Brian at Steve's Aircraft (I think somewhere in WA or OR). IIRC he's in the gascolator business, and might sell that product for you, or license the design, etc. etc.
Click to expand...

I'm thinking about trimming down the fat and designing my own bowl for it since I had reused the original bowl.

I've got this, a throttle body, and a fuel valve that I'd like to look at marketing some day.

I've been meaning to do this one for awhile, but it's never been urgent. This week I finally got around to it. My Hatz has no front cockpit instruments, just an opening in what would be the panel into the space forward. A passenger could put things there, but it wasn't useful for baggage during solo flights because things might fall out:

Monday, I made a new door and frame for it out of a piece of mahogany plywood that a buddy had for a Minimax repair that he never completed. Tuesday, two coats of shellac, and Wednesday (today), mounted it in the plane. Same combination lock as the one I used for the rear baggage door a few posts above. I'm pretty happy with how it came out.

Afterward, I went flying for awhile, then removed the rear seat to access the ELT battery, which was due for replacement. At the same time, I moved the ELT antenna, which had previously been bolted to the seat back. This turned out to be a real PITA due to the contortions I had to make to access it, but I finally managed.

No pics but I finally got the ignition harnesses made up for the Gipsy Moth.

"A million little things!" At that stage where there's so much to do, but it must all be done concurrently it seems. 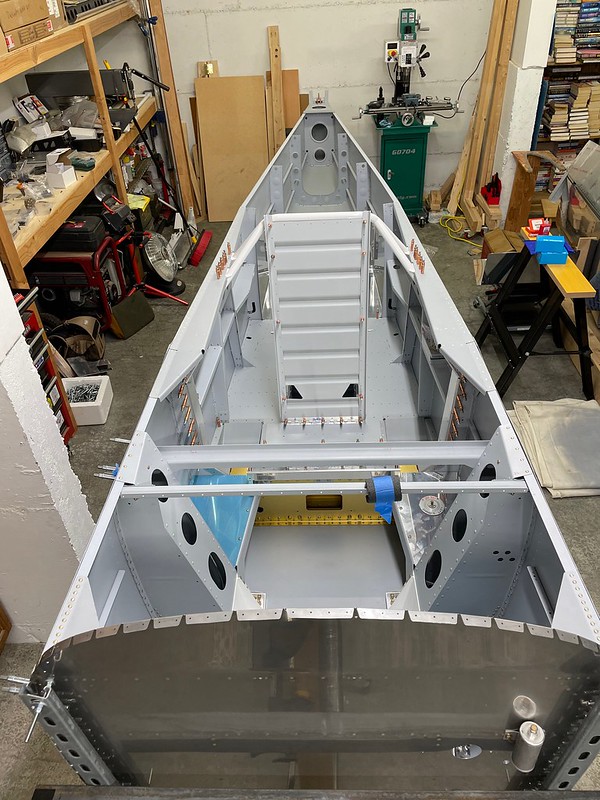 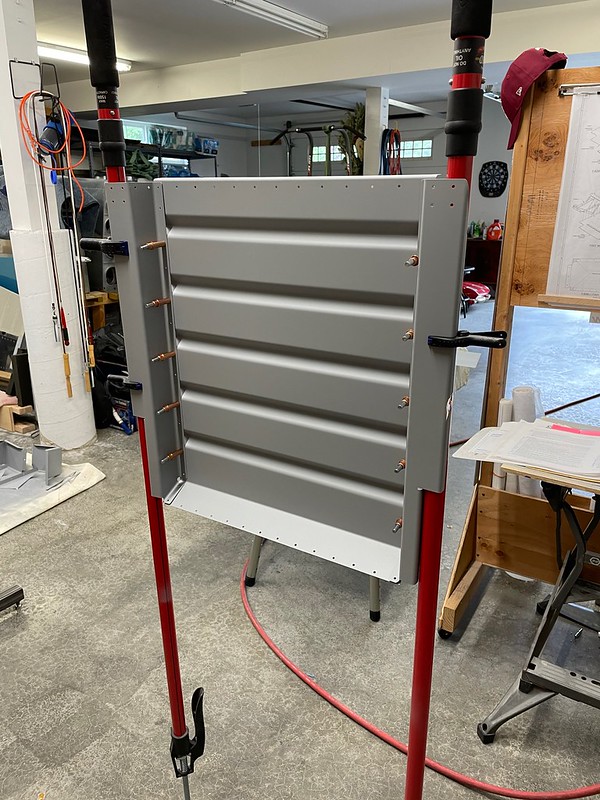 Finished rear seat back last night. Being so light weight, and awkward, I was afraid I'd have difficulty setting those rivets without damaging it. But, using the FastCap Third-Hands as a frame to clamp it too, I was able to buck or squeeze every rivet by myself. It turned out pretty good! 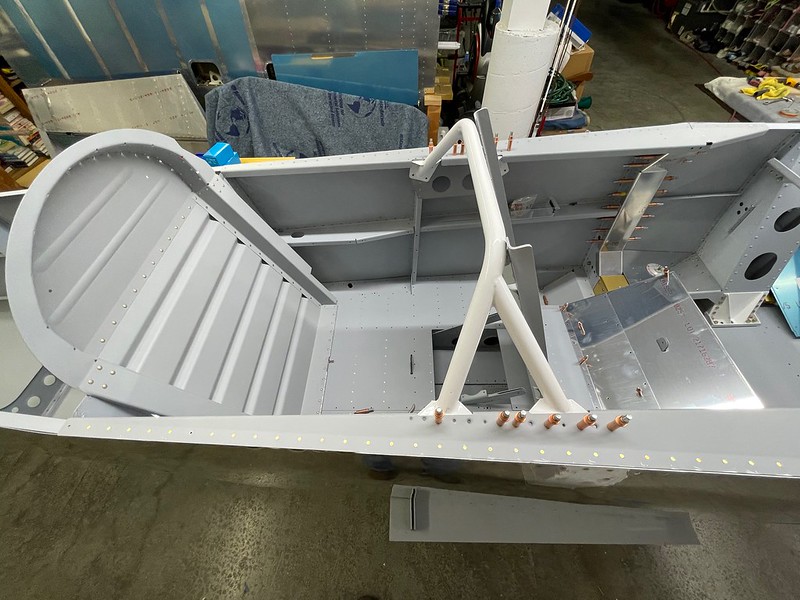 A few flights back, when preflighting found this little problem: 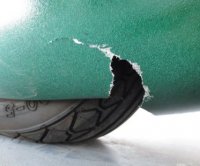 Tire must have been low and on landing hit the side of the pants. You can see it is a bit low here, remember checking that it looked fine before flight. So, took it off and brought it home, it sat in the garage for a couple of weeks.
Finally got around to fixing it. Ground a taper on the inside to bond to, taped some waxed paper to the outside to hold the shape, then put on three layers of glass and epoxy:

Sanded it down, then a layer of micro. All out of the fancy car paint I used on the plane, but had some "hunter green" rustoleam from a telescope project. I'm calling it close enough. Put it back on the plane today:

Then, took up a guy who is considering building one for his first RV flight.

Do you have any more information about this test? What aircraft is this, and who's doing the testing?

After a short flight shooting landings this morning in strong gusty winds (strong enough that I questioned whether I should fly but turned out to be great fun), I retorqued my prop bolts (required every 50 hours or change of seasons) and started figuring out how to wire the new wingtip strobes I just bought from @djmcfall. The original builder of my plane didn't install lights but did weld mounting plates to the tip bows and run the wires. Only, he ran only two wires and the combo nav light/strobe requires five. I had hoped to use the old wires to pull five new wires through, but naturally he did it right and tied the wires to the ribs.

Got a few little projects. Sunday after flying I removed the elevator trim tab for refinishing, it's just varnished plywood. Figured I'd refinish it with shellac since I just like working with shellac, and the baggage door finish came out great. Unfortunately, I don't know whether it was just bad shellac (it gets old and no good) or something on the wood, but it beaded up and never cured, what a mess. I was ready to give up and cut a new one, but I made a last ditch effort with solvent to wipe off all the old coating and start over, and it seems to be working... 3 coats in and it's drying nicely, one more coat before I go to bed and I think I can remount it and go flying tomorrow.

While the shellac was [not] drying last night, I made some orifices for a homemade compression tester. Tested them in the engineering lab at work this morning and they're consistent flow at a fixed pressure, next is to solder one into a fitting and add the regulator, gauges, etc. It would have been easier to just buy a tester but it wouldn't be as interesting a magazine article. Then maybe I can get back to the oil separator.

I was working on a new oil cooler duct and pushed the Rocket outside into the dead calm but blazing hot Mojave sun to try speed the cure of the epoxy. I went inside for lunch and along came a Wizard of Oz sized dust devil which spun the airplane around and threw it against my garage, tail first. The RH elevator is smashed beyond practical repair. New parts order to Vans for a replacement elevator going out Monday - and I have a call out to the VAF horde to see if someone has a spare elevator kit I can do a "borrow/payback" deal to take the sting out of the shipping lead time. 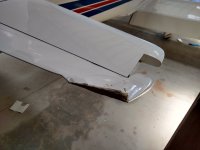