TerryM76 said:
My instructor and I were both tired after that session. Getting recurrent is kinda tough after an 18 year absence
Click to expand...

Fabricated the master disconnect bracket for the panel
Moved a couple components around, added some wire passthroughs
Assembled and drilled up the main landing gear

Next up, cleaning up the shop and knocking out some projects around the house
Oh, and studying for glider training...
B

Since I started flying this plane the CHT has been a bit higher than I would prefer. I can keep it under 400F in cruise if I throttle back, but for climb and aerobatics it is usually pushing 450. Reading what other RV folks have done I heard about blocking between the top of the cowl and the "intake ramps". Tried it with duct tape and indeed takes 10-15F off.

Most who have done this did it with foam and fiberglass, but I hate-hate-HATE working with fiberglass. So I made some little aluminum ribs out of scrap and rivited them in place. Just got them done, The weight weenie in me is very please to find it only cost me 37g (0.08lb). Bet glass and epoxy would have come out heavier.

I have three questions for bifft:
1) Which model RV do you have?
2) Is it fair to say you would really like to have your CHT's 30-40 degrees cooler?
3) Where exactly does the main cylinder cooling airflow exit your engine cowling?
T

Unless it’s health related, you only have to fiberglass once and be done. Hate is short lived.

There is plenty of cooling capacity in a stock RV cowl. I have smaller inlets and MUCH smaller outlets on my Rocket and it cools great, despite 50% greater heat load.

VAF has many, many threads on cooling issues and if you have not checked them out its usually a combination of little things that kills you:

Gee on top of building a plane and all that goes with it I get the joy of high prices and excessive shipping cost. What more to do to help save aviation this day and age.
B

Victor Bravo said:
I have three questions for bifft:
1) Which model RV do you have?
2) Is it fair to say you would really like to have your CHT's 30-40 degrees cooler?
3) Where exactly does the main cylinder cooling airflow exit your engine cowling?
Click to expand...

1) 8A
2) Yes, currently I limit time in climb to keep it down.
3) on the bottom. The exhaust pipes are in the way, the nose gear goes thru the same general area.


Toobuilder said:
VAF has many, many threads on cooling issues and if you have not checked them out its usually a combination of little things that kills you:

I've spend lots of time reading those threads. Have checked my baffles as best I know how, haven't measured delta p. (not keen on cutting more holes in the firewall). Did my best on setting ignition timing per the marks on the flywheel, but again, don't know how good my best is. Run the mixture full rich for takeoff, running it rich at other times means my plugs clog up fast.

You can always find a factory built aircraft which uses the same engine and use it as a reference. Sometimes folks will block the number one cylinder to bring it up while taking other measures to bring down the rear cylinders.

Waiting for mine to be finished. 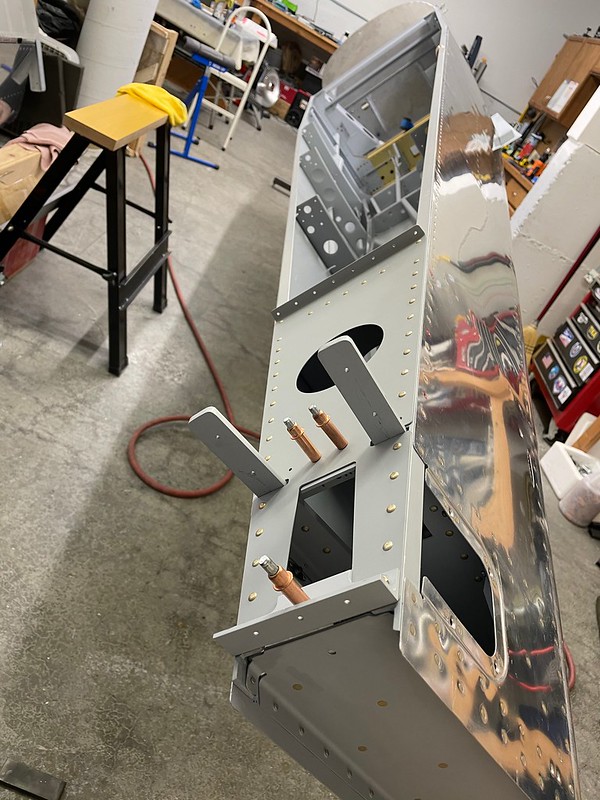 Did some unintentional work today... Flying home from Phoenix with just 15 minutes to go to home and suddenly the exhaust note changes significantly and I smell burning fiberglass. First thought is that I broke an exhaust stack and thats exactly what it was. Fortunately, I was with Center, at 8500 feet and directly over one of the largest ex military runways in all of SoCal. So I pulled power, called tower and landed without incident. Once parked, I called some friends and one of them headed my way to pick me up. By the time he landed I had the exhaust stack in my hand, so back to my house to patch it up with the TIG. I called another friend for the return trip and as the last bead was cooling, he pulled up to my hangar. We were airborne in minutes and headed back to grab my stranded Rocket. Pipe reinstalled and cowl going on within 15 minutes of landing - and I was home safe with the Rocket 30 minutes after that.

Another plus for the power of GA... If I had to drive that mess back and forth the airplane would still be there until next weekend. I sure had other plans for this afternoon, but all in all it only cost me 5 hours or so.

Cool. Soon you'll be able to sit in it and make airplane noises. Can't wait to do that myself.

This was actually a few days ago, but I made a start on fuel tank number one, only seven more to go...
I'd tell you more, but then I'd have to kill you. 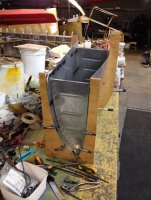 pylon500 said:
This was actually a few days ago, but I made a start on fuel tank number one, only seven more to go...
I'd tell you more, but then I'd have to kill you.

Ahh the "joys of Pro-Seal"

I learned that 3d printing a rib mold is a pain in the ass - sanding the layer lines really sucks.

But if you vacuform a sheet of lexan over the printed mold, and keep the temps on the low side when heating the lexan sheet (185c was working for me). You can save a buttload of sanding Also means you don't have to reprint a mold if you don't get the release agent perfect (and the lexan doesn't really stick to epoxy resin anyway).

My team moved the motor from a hangar in 2J9 to project hangar at 2J0.
It was on the motor mount, and secured so good I didn't hear a peep our of it all the way down! (37.5 NM straight line)
Think I may have an engine hoist lined up for the work session Friday.
Percy in NW FL, USA

Looked longingly out the window yet again at my unfinished hangar and shed a small tear being heartbroken over those beautiful, precious building moments I'm missing while I wait for my contractors to decide, "Hey, it's a nice day for working on Bob's hangar." Sadly they rarely seem to have those thoughts, and I sink deeper into my depressed malaise and regale my Labrador with stories of the adventures to come when we finally finish my plane (she renders emotional support to the process). Woe is me.

The little room in the back will be the rec room. I'm thinking pool table, foosball, a few pinball machines, and maybe an indoor whirlpool spa.

Or maybe it'll just be the bathroom.
W