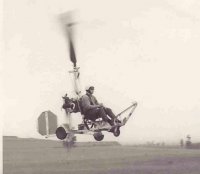 Great looking machine, I built and flew one 53 years ago.

Thanks for the memories Gerald. That was an awesome day.

knotsofast said:
Thanks for the memories Gerald. That was an awesome day.
Click to expand...

Were you at that event?

Imagine the reaction you would get if you showed up at the airfield with that IF HELICOPTERS HAD NEVER BEEN INVENTED.

GyroGerald said:
Were you at that event?
Click to expand...

That's my Bensen in the video, well it was before I sold it anyhow. 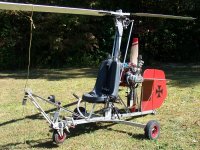 That was my first aircraft rebuild. Sold it to buy the derelict Scorpion that I rebuilt. 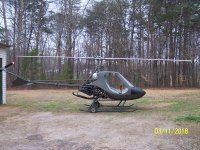 Recently upgraded to a 162F

An old friend and myself was working on a Benson back in the mid 1960's and had it built except for the rotor blades. We watched a Benson fly and we went home and unbolted it and scraped it.
Last edited: Nov 12, 2019

The old Bensens didnt have horizontal stabilizers on them so self trained pilots had more problems than what people do now.
G

Pops said:
An old friend and myself was working on a Benson back in the mid 1960's and had it built except for the rotor blades. We watched a Benson fly and we went home and unbolted it and scraped it.
Click to expand...

A fixed wings aircraft pilot flying regularly his FW airplane must not fly a gyroplane because one day or an other his reflexes will kill him : "a good" example of this ... the man 75 yo switched to gyroplane, bought a super powerful gyro (140 hp) looking like a beluga (huge fairing : stupid for a tandem gyro), he took off, purpoised a little bit ( PIO), ascent steeply when he realized he had the nose pointing the clouds he pushed the stick, went in G zéro full throttle, and the engine torque flipped the gyro and he died a few days ago .

I have never flown a FW and at the top of every ascent I pull back the throttle before I push the stick , exactly the opposite that one must do in a FW (keep full throttle and push the stick not to stall) ... do this on a gyro and you die .. and soon or later a fw pilot will do this expecially if he still flying FW's

so ok the bensens were really instables without HS , but some gyroplane pilots go on killing themselves on this kind of gyros (see the video) :

and it happens in less then a second with no exception when the pilot keeps full throttle in zéro G ..

All those gyros : ela's magni's, etc have not been designed by aeronautical engineers but have only been inspired by the bensen (same rotor, engine behind etc)

these are bensens but with super heavy ferrari looking enclosed fairings (resulting in horrible stability issues in yaw and pitch), and super powerfull new engines

to compensatefor the nose down pitch effects of the fairing and of the too high position of the center of thrust vs COG those makers were forced to install 2.00 meter long Horizontal Stabilizers with 0012 airfoils and a -2° AOA ! (imagine the drag of such so called aircrafts)

on the other hand this kind of gyros (below) are tottaly safe and stables the the prop blows the tall tail and H Stab and get's rid of yaw (p factor) and roll (engine torque) engine effects .. in G zéro the gyro can't flip over on it's roll axis neither it can bunt over on it's pitch axis : 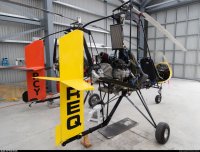 but the nice rich former FW grand fathers want to cruise "fast" with a super powerful engine , and to be warm in a huge fairing ....

the makers are in a look/power competition ... they all offer enclosed, powerful tandems ... so there will be other victims
Last edited: Jan 2, 2021

I disagree on so many points here. As a test pilot and builder with association of some of the best rotorcraft builders and pilots, both gyros and helicopters.
G