Came across this one today, 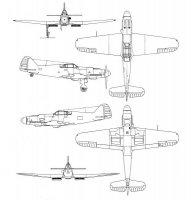 the Finnish concept of what the Me 109G should have been. fast, well armed and not trying to kill the pilot on every landing.

Twodeaddogs said:
the Finnish concept of what the Me 109G should have been.
Click to expand...

Twodeaddogs said:
the later model Ki 61 which fought the B29s.
Click to expand...

Wasn't the Ki 61 somewhat derived from the Heinkel He 100? 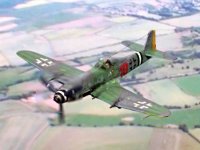 No, the Japanese WWII aircraft were original designs, it was just wartime propaganda that suggested they were copies of foreign aircraft. Check out the late Rene Francillon’s Japanese Aircraft of the Pacific War, one of my favorites of the Putnam series, for a great overview of Japanese aviation at that point in time.

A bunch of 109 parts in that thing, and if you look closely and read the wiki article it looks like they used the gear too. Simply swapped it side for side. Note the characteristic angle between the strut and axle.
R

Bill-Higdon said:
Came across this one today,

It’s embarrassing how backwards-thinking our Canuck entry was on this list. Cool plane though and I’ve always thought it could have found its niche defending convoys.
R

Tiger Tim said:
It’s embarrassing how backwards-thinking our Canuck entry was on this list. Cool plane though and I’ve always thought it could have found its niche defending convoys.
Click to expand...

Gregor was stubborn advocate of biplanes. Sure biplanes could still out-turn monoplanes and they could fly for short airstrips, but their slow speeds rendered them obsolete by 1939.

Early in World War 2, the RCAF was so desperate for coastal patrol planes that the flew CCF-built Grumman Goblin biplanes to patrol approaches to Halifax harbor. Those Goblins had two seats and retractable landing gear.
A

Bill-Higdon said:
The Ki 100 was a Ki 61 fitted with a Mitsubishi Ha 112 which made it abetter airplane
Click to expand...

there was a late model Ki-61 that was about equivalent to a 109G 6,as it had been improved upon the basic Ki-61 which was essentially about on a par with a 109E7.

Per René Francillon, the original Ki-61 was powered by the 1,100 hp Ha-40, a licensed copy of the Daimler-Benz DB601A. Kawasaki then developed their own more powerful evolution of the engine, the 1,500 hp Ha-140 optimized for high altitude for the improved Ki-61-II intended to intercept American heavy bombers. The engine had problems, however, and as a result a lot of Ki-61-II airframes sat unused waiting for the engine issues to get sorted out. In the end, Kawasaki turned to the big 14-cylinder Mitsubushi Ha-112-II radial original intended for bombers. The result was a plane that was lighter and handier than the inline version and only slightly slower, but the engine was reliable and well-proven. The Ki-100 could take on B-29s at altitude and tangle with Hellcats on equal terms but they were too few too late for the Japanese war effort.
You must log in or register to reply here.
Share:
Facebook Twitter Reddit Pinterest Tumblr WhatsApp Email Link