BrianW said:
The inheritance of training in a C-150 conducted by a WW2 RAF pilot instructor (then based east of Dallas), was the edict that one never push, but always pull in the landing phase.
This finally resulted in a flattened tail hold down eye bolt after several years, which was replaced when its thickness was down to 50% at the contact point, and on one occasion the request to conduct my weekly landing at Tulsa Intl adjacent to the tower (presumably so they could enjoy the fireworks show ). True, I finally learned to ALWAYS land at 20 degrees flap which places the nose down, and the tail out of the contact zone.
Brian W
Click to expand...

A titanium replacement eye bolt, 'to save weight', would have greatly impressed that tower.
A

Traskel said:
Human proprioception, (brains awareness of where the body parts are in space and relative to each other), and equilibrium are seriously compromised beyond 40.degrees from vertical. Fighter pilots sit comparatively upright for that reason based on much testing.
Click to expand...

My experience with prone flying contradicts that, but I find a supine position more comfortable for the neck strain of holding a helmeted head up when flights get over a couple of hours. There should be a thread on prone cockpits here.

My OPINION is that a harness system that hooks into the aircraft with quick release "buckles" of some type at shoulders and hips with a padded surface for the knees, and a foot rest/rudder bar/pedal is better for crash restraint than a reverse lap ( back? ) belt on a padded couch. Just skip all the weight and bother of a "seat" as part of the airframe.

Something like this. ( note the suspension hook in points )

robertsonharness.com
With the front of the body supported by a relatively thin padded front panel, like this.
Standard - Hang gliding free flight harness by Aeros Ltd. | AeroExpo
which uses knee hanger straps, or this one that uses a stirrup bar
Eaze - Hang-gliding harness bag by LiteFlite Pty Ltd/Moyes | AeroExpo

The visibility problems with prone don't apply when hanging under a glider wing, since there's only a few wires and a triangle control bar to block your view, except the wing above, and your own body. But checking your 6 in a Horton style design? Not so easy. However, with no need for a couch to lay on, you can make the center section leading edge, upper & lower panels back to your waist transparent. Darn good view.

I suspect the Fighter Pilot angle is just as much about G loading as perception and equilibrium. Theoretically, prone can take a lot of Gs. ( I've only pulled about 4 ) but breathing is lots easier on the back than on the front at higher loading. Ideally flat on your back in a water bed for max G resistance or even with the feet higher than the brain, but then visibility becomes a real problem.

I'd get fairly flat supine in cruise mode between thermals, but my harness is adjustable in flight for that, unlike this one. Finsterwalder & Charly - airsport equipment since 1974
T

Okay, my bad. I truncated the prior, simplified overview of our (not simple) sensory systems which make up our equalibrioception. A quick side note first - the best position for dealing with High-G-loading is on our back with legs slightly elevated. Great for G's, not so good for overall situation awareness when flying..

So our bodies evolved in a single G environment, largely in 2 dimensions once that whole tree thing passed. The complex interaction of our vestibular and proprioception sensors work great for simple linear and rotational accelerations provided they are not sustained. Multi-axis or sustained, 3-dimensional velocities and accelerations can leave these systems confused and such confusion has lead to a large percentage of "pilot error" incidents. For reference here is a great, FAA guidance document on the related phenomena or Wikipedia on Spatial Orientation

Flying trains us to (more) correctly interpret the signals from our brains and sensors. A gymnast can do a full-twisting, double back, and stick the landing but most of us humble humans cannot. So training helps loads, we just can't consciously track what we are learning. The basic point is that these systems can be more readily upset the further we are from our standard vestibular datum, e.g. Vertical @ 1 G, so it is smart to design pilot position relative to our inherent limitations. Note - Most IR pilots feel that they are inherently better pilots through the process which trains them to depend upon instruments rather than they're senses.

And a last note - The bulk of Fighter pilot cockpit design centers on ergonomics for access to the plethora of instrumentation and massive data processing required and the upright position serves that purpose. Upright is also the only way a human can (likely) survive ejection.

combining the fuselage of Fritz, but as a two seater,with the wing of the AP12 first image
T

The best foot launched vehicle ever built. I wish they even easier to transport and assemble @ launch... Version 2.0?

Awesome that you had one! They must come up now and then. Add a modern, small, efficient electric propulsion pod that folds back into the structure and !!!!
T

The Swift, that is..

And it’s among of the most expensive ones, the swift.

erkki67 said:
And it’s among of the most expensive ones, the swift.
Click to expand...

How did we get from the low aspect ratio to the SWIFT? What did I miss? Moderator?

Lying flying position. Calm down and leave the moderators cguarding the raptor thread.
A

Re: seating position digression
One "Advantage" of a Low Aspect Ratio craft is the possibility to have a thick center section/fuselage and hide the pilot inside. al la Horten Ho-IV

Most of the designs looked at here are "flying wings" of various flavors, with tails or not, and the Horton glider is probably the best "not a hang glider" prone setup other than the lovely Japanese replica from Nausicaa of the Valley of the Wind. From Anime to Reality - Rafu Shimpo Which doesn't really count since the pilot is outside. ( like in the movie )

I haven't seen much here dreaming about F-104 LAR types, perhaps because while this group can be a bit crazed, there's a hard core of practicality and P&W turbojets that size are not common in homebuilts. So Vought "flying pancake", UFO, and Arup designs and a desire for simple, storable, and freaky looking predominate the discussion.

Stuffing a pilot into a small Arup is "easier" prone, as far as having a smaller cockpit seen from the front. But visibility, ease of access, and other factors make it a very rare accomplishment, usually limited to WW2 Experimental Rocket planes and, of course, modern hang gliders, which don't fit well into this thread. So the knowledge base for making a comfortable Prone Cockpit is lacking. I recommend against Prone designs unless there's a good reason, ( and I've got lots of hours prone under a wing ) and there's no solid reason to link LAR & prone, IMHO.

I'm going to use this prone position drift to drift back to leading edge vortex discussion. 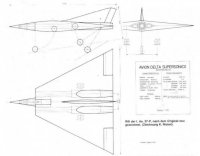 I was reading the book Nurfluegel by Horten and Selinger recently and I found this chapter about the I. Ae. 37-P and how the leading edge vortex caused elevon suction, which in turn caused negative stick force. Nickel and Wohlfahrt also talk about elevon suction not only with delta wings but any planform.

Has anyone experienced this effect in flight or has an idea on how bad or ''annoying'' it can be for the pilot and how can it be avoided if necessary?
S

Well, prone pilots are like pusher props in that they do great if you get them just right, but suck if you don't, and getting them right involves compromises that may be impractical depending on the airframe.
Anyhow, twin facetmobile.
Though this one one is technically a smoothmobile. 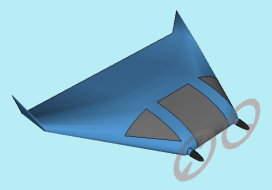 Forward visibility extends from straight up, to around 45 degrees down unbroken aside from the frame members, instruments, and your feet. The whole thing is flat-wrapped.

Arfang said:
Has anyone experienced this effect in flight or has an idea on how bad or ''annoying'' it can be for the pilot
Click to expand...

Tail slides produce stick forces away from center. Could be stick forward or back, depending on which way from perfect vertical the airplane is. I put two hands on the stick in that maneuver. It would not be fun to have it happen unexpectedly, so I suggest that the condition you described is worse than annoying.

Arfang said:
Nickel and Wohlfahrt also talk about elevon suction not only with delta wings but any planform.

Has anyone experienced this effect in flight or has an idea on how bad or ''annoying'' it can be for the pilot and how can it be avoided if necessary?
Click to expand...

The YB-49 was rumored/reported to have elevon suck issues, and a pneumatic stick pusher was installed. The original Mitchell B-10 flying wing had Junkers style elevons under the trailing edge, partly to avoid this issue and partly for easier construction. I haven't had personal experience with the phenomena in full scale flight, but have seen it in some small free flight models.

I guess when the Arup and related designs were cited here, a misspelling happened, the right term being 'Flying Flounder', not founder. I was unable finding data about Flying Flounder wingspan, although perhaps it can be deducted from images, knowning the engine inside, and propeller diameter range for this engine. Tips?

An inherent issue in Arup may be Ground Effect on landing, that could even put airplane upside down, my feeling is for solving this some dihedral or upwards taper will help, instead of the flat bottom side in original Arup, this dihedral seen in AP-10 3-view added by erkki67 above, but reports exist of this adding drag and worsening performance, also Dutch Roll showing. Who knows? Blessings +
S

Urquiola said:
I guess when the Arup and related designs were cited here, a misspelling happened, the right term being 'Flying Flounder', not founder. I was unable finding data about Flying Flounder wingspan, although perhaps it can be deducted from images, knowning the engine inside, and propeller diameter range for this engine. Tips?

An inherent issue in Arup may be Ground Effect on landing, that could even put airplane upside down, my feeling is for solving this some dihedral or upwards taper will help, instead of the flat bottom side in original Arup, this dihedral seen in AP-10 3-view added by erkki67 above, but reports exist of this adding drag and worsening performance, also Dutch Roll showing. Who knows? Blessings +
Click to expand...

Took a look around.

You can sort of estimate the length and prop size. using the people and edges of the concrete as a reference. 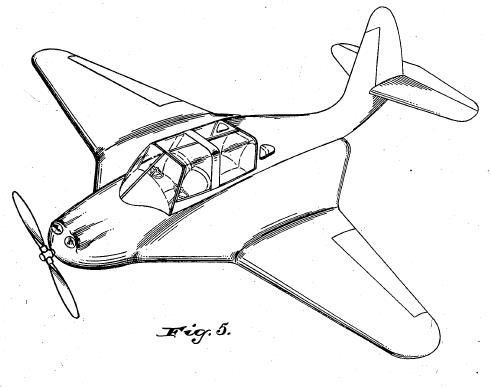 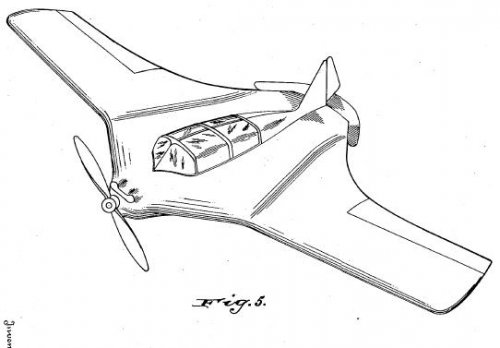 Looks like Eshelman was into the blended-wing-body concept as well.

I vaguely remember having read short aspect ratio flying machines, the extreme can be the 'Flying flounder' do well under power, but lack any gliding ability with engine off. Still lack the 'wingspan' of flounder. Comments? Blessings +
B

pictsidhe said:
A titanium replacement eye bolt, 'to save weight', would have greatly impressed that tower.
Click to expand...

Or Depleted Uranium for a bigger show
A

Urquiola said:
An inherent issue in Arup may be Ground Effect on landing, that could even put airplane upside down,
Click to expand...