berridos said:
Wish someone could explain me how this marvel works
Click to expand...

That makes my head hurt.
P

berridos said:
Wish someone could explain me how this marvel works)
Click to expand...

Watch the 2 videos several times and it will make sense. Pretty cool.

I got it)). The mixer creates artificial washout. However that mixer doesnt solve the adverse yaw produced by induced lift when rolling. Wonder how they use the winglets in that mixer. The kinematic looks incomplete.

You can see the “conical camber” on this delta. 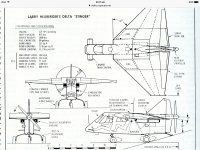 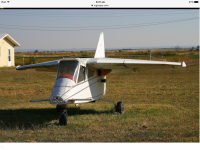 If I remember it well, the F-104 on exhibirion at Speyer Science and Technology museum in Germany, reduced to skeleton, allowing to think any homebuilder could make one, had some type of moving part in the leading edge, going down as to increase camber, thus lift at low speed I'd say.
About the Larry Heuberger's Delta in the image above, same as in the atached 3-View of Hoffman Flying Wing, mr Hoffman changed into workable plans the concepts by Snyder, the inventor of Arup machines, and the Roy Scroggs Dart, all have a counter-dihedral receeding wing, while my first option will be as in my Icon, by R B Johnson, patent US1887411. It's just about Dutch Roll? For sure, any 'Ground Effect', specially disturbing at landing, will be reduced with an ordinary dihedral,

receding wing thickness on the lower side. Comments? Blessings +
Anybody having data about 'Wingspan' of R J Thompson 'Flying Flounder'? It went airborne

Only the Hoffman Arup had leading edge sweep, the early and very successful Arups had a straight leading edge.

berridos said:
Wish someone could explain me how this marvel works))
Click to expand...

Think of it as a bank of 3 V-tail mixers of varying ratio and than add in a third axis on the top side of that whole mess.

I'm not sure about having failed in explaining the doubt.
The type of wing construction I'd endorse is as 'A' in the attached image, but the Hoffman, the Scroggs and other are arranged the opposite way: 'B'.
My choice was made thinking in allowing air flow going outwards when approaching the ground, a flat bottom of wing perhaps worsening the ground effect, the airplane rebounding or even put upside down

. I'ts rather about the architecture of bottom side of wing than just the leading edge. Blessings +

The UFO has a nearly flat bottom and a curved spanwise top amounting to anhederal. The UFOs are reported to have very positive stability in all planes - pitch, roll and yaw.

Great find! Those old reports from the NACA are works of art.
R

CF-104, CF-8 and several other jet fighters have hydraulically drooped
Leading edges to increase wing camber, increase lift and reduce landing speeds. They also have flaps and drooling ailerons to increase camber (and lift) along the trailing edges.

CF 104, Harrier, and many other jets have anhedral (down ward tilting wing tips) to improve roll stability. You see, sharply swept wings add to roll stability so much that the airplane might develop Dutch roll, but drooping wings reduce stability close to neutral for more stable flight.

The secret to slow flight in Low Aspect homebuilt airplane has very very little to do with airfoil and high lift devices, it relies on 3 functions, they are Planform, Wing Loading and Available Thrust.
the planform must ensure a stable vortex is formed at high alpha, the wing loading MUST be lower than conventional planform aircraft to compensate for the increased induced drag at high alpha, obviously, as Zimmerman demonstrated if you have sufficient thrust you can reduce speed to zero while maintaining height.

The beauty lies in targeting those three factors while keeping cruise acceptable.

The induced drag of LAR is horrible and the adverse yaw much more significant then in traditional planes. The way to overcome this is create several elevons per side and to tailor the lift distribution for any given situation.
For example in cruise you dont want to build in static washout as it will increase drag. The minimal id would be by flexing the inboard elevon up and the outboard elevon minimally down so that you achieve an eliptical lift distribution.
In case of turning, the way to avoid id is by deflecting on one side both elevons slightly down and on the other side the inboard elevon slightly down and the outboard elevon strongly up. (outboard elevons should have a sharp super frise setup).
In approach setup you want the inboard elevons to have strong up deflections with the outward ailerons having significant downward deflections in order to increase washout ,and add massive stability and avoid tip stall.
All this is filled with massive nonlinearities and is a very delicate subject on LAR.
Its pretty impossible to build a mechanical mixer for these situations.
Is there any lightweight reliable fly by wire mixer? RC models can do this without problem with isolated servos.

Thinking out loud, maybe one solution would be to use the akaflieg mixer (approach safety configuration-strong dynamic washout) and put adjustment servos on the elevon leverarms depending on the flight regime (cruise min id regime). If those servos fail they just get stuck in the wrong position, but arent critical to safety. I am not activating the elevons with servos, just changing the leverarm.
Would need to think how to adjust for the 3 to 1 aileron movement in a mechanical way.
Last edited: Apr 12, 2020

About 'Dutch Roll' and some LAR designs, a few months ago, while driving, I watched a car towing an small trailer, that made exactly the banking movement called 'Dutch Roll'. Any comment? Blessings +

It sounds like things ate getting a little to

berridos said:
The induced drag of LAR is horrible and the adverse yaw much more significant then in traditional planes. The way to overcome this is create several elevons per side and to tailor the lift distribution for any given situation.
Click to expand...

Does anyone know if the Facetmobile exhibited adverse yaw tendencies?

I have not observed any discernible adverse yaw when flying an AR=2 model glider with simple 3-servo elevon & central rudder controls.. not a lot of rudder needed to make turns.. but maybe others have made different observations?

I have also observed that when banking into a turn in a sailplane, the adverse yaw is extremely noticeable, necessitating a lot of extra initial rudder input when starting into a turn.