Maybe Marc Zeitlin can weigh in on the canard thing.

Alright Matthew, you spec’d out which engine/psru you would like to use and asked for airframe ideas, which generated a lot of engine ideas: funny how that works!
My only suggestion is to study the creations of the now deceased Leeon Davis, who once suggested “more power is always an option, but less weight won’t cost as much.” His DA-11 is a good example of his “less is more” approach.

crusty old aviator said:
His DA-11 is a good example of his “less is more” approach.
Click to expand...

Forget the PSRU. Cheaper, lighter and then either the DA-11 or a Quickie, with maybe a little more wing area, would give a nice compromise on the landing/cruise speed ratio.

Articles on light planes, several near the top then another the last post all the way down the page.

Have a look at the payload of the DA-11, as well as the pilot size restriction. Matthew already admitted he's bigger than Billy Barty, and maybe Herve Villechaize as well

A 110% DA-11 (or DA-9... whichever was the one with the Briggs V-twin) might be able to do this job for him, but that V-tail mixer mounting structure is about as much effort as the rest of the airplane.

Here's another vote for the Quickie, unless you think it's too hot. Stall is 47 mph.

Thanks, Dave. I am fond of the Quickie but not composite construction and I doubt very much that an original Quickie would stall that low. 47 mph would imply a net CL (both wings combined) of 1.6 at the published gross weight and wing area, something like a CL of 1.2 and speed in the mid-50s seems more realistic.

Our own Hugh Lorimer's Iolaire is an interesting example in terms of the high-wing canard configuration, so I hope Hugh weighs in with his thoughts for a low-powered single-seater.

EDIT: I checked and Hugh has not been active here since 2017 and I know he was ill. 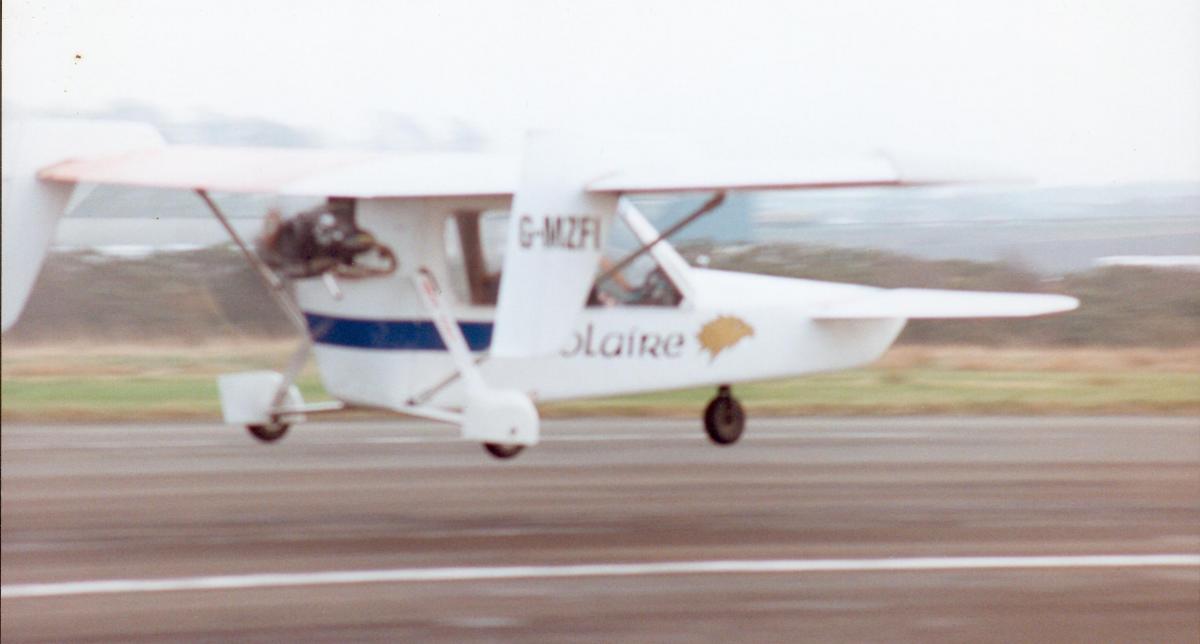 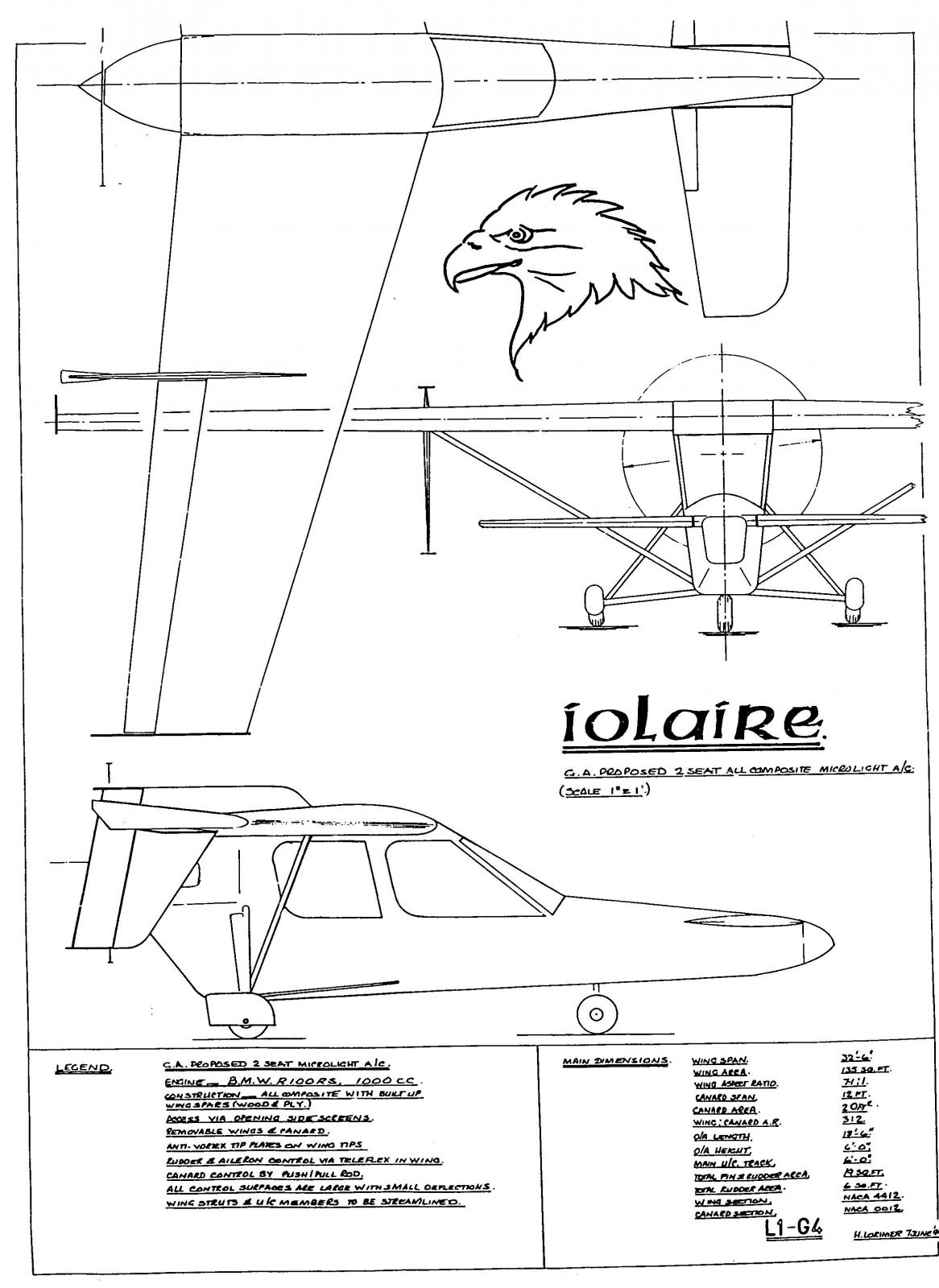 cluttonfred said:
Quickie would stall that low. 47 mph would imply a net CL
Click to expand...

But the Quickie doesn't stall.

The landing speed can be a lot lower than the numbers would indicate once the canard gets into ground effect, especially if it has a reflexor - and a little bit more wing for the 110% sized tin version.

I stand corrected. ;-) If I were going to go that route, I'd add a lot more wing area and it would look like a smaller version of the Guerpont Autoplum. 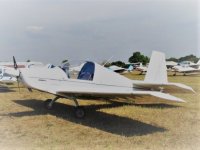 Matthew:
What Reynolds number do you expect for the canard? What Cl does the Gottingen airfoil achieve at that Reynolds number? When rough? (I.e. with rain and bugs on it). We still want it to stall first, of course. I'm not sure if the main wing ameliorates the induced drag that the canard wouqod have, but I'm sure a calculation was worked out long ago. How slow do you want to be able to fly at while still having a reasonable margin above stall? It seems likely that the Gottingen airfoil will be draggy at higher speeds (i.e. low Cl).

It may he worthwhile to look at weight vs. flight surface area and stall speed for various configurations of airplanes meant for similar purposes. Certainly not definitive, but still possibly useful. If takeoff and landing distances matter, you might want to look at those as well.

My back of the envelope (actually, spreadsheet) calculations were for a broad canard the same chord as the wing (say 4' or so) and a landing speed of about 40 mph or so, which gives a Reynolds number about 1.5 million. I don't know about the roughness but the Goettingen series is quite old, not at all a laminar flow airfoil, so not normally too susceptible to wild variations when dirty. Airfoil tools puts max CL at 2.1 or so at a Reynolds number of 1 million but original NACA data puts it at 1.7 (I don't remember the Reynolds number of the NACA data).
L

The numbers in the OP are very similar to the Sorrell Guppy, which originally flew with an 18 HP golf cart engine. However the more I read about it I have come to suspect it was putting out more than 18 HP. I think that the switch to dual carbs upped the power output a bit, probably into the mid 20's which would match better with the reported 2 gph fuel consumption. Climb was a bit anemic, later builders put engines up to 40 HP in them.

Not sure if a biplane would appeal to a modern audience, but I like the look of the stagger wing.

lr27, I’ve spent more time studying tandem wings as an adult, but as a teenager I did quite a bit of canard research, even wind tunnel time, and in many ways they are the same. I think the simplest approach is to vary the span of the two wings but leave all the rest (chord, planform, airfoil) the same. That’s the way many Mignet tandems work, ditto the Lockspeiser canard.

So, despite what I said earlier about two different airfoils, I’d start with that principle and just make sure that the aft CG limit is at a point where the forward wing (whether it’s larger or smaller) is at a 50% higher wing loading than the rear wing so it’s working harder all the time has to stall first. That does mean a canard is the least efficient way to go because it has more surface that will never get close to max CL, but that’s not the only factor that matters.

I think either the Catto Acro-X biplane canard layout or a monoplane canard layout could work fine, ditto a Mignet tandem or something like the Autoplum. Of them all, I think the Catto layout is most appealing. It’s easy to imagine an ultralight-style, ladder frame of bolted spar tubes and bracing wires, identical sheet metal ribs, and Oratex or sewn Dacron fabric going together very quickly.

Stephen Asman, the Sorrell Guppy is a neat little plane but you’re right that it’s not the vibe I had in mind.
V

cluttonfred said:
I think either the Catto Acro-X biplane canard layout or a monoplane canard layout could work fine, ditto a Mignet tandem or something like the Autoplum. Of them all, I think the Catto layout is most appealing. It’s easy to imagine an ultralight-style, ladder frame of bolted spar tubes and bracing wires, identical sheet metal ribs, and Oratex or sewn Dacron fabric going together very quickly.
.
Click to expand...

With a canard wing up front and biplane wings in back, I wonder what is required to make sure the forward wing stalls first. Even if all the airfoils are identical and the canard is more heavily loaded, surely the flow field around those stacked rear wings has an impact on the stall behavior/critical AoA of one or both.
It's certainly not a deal breaker, just another thing to consider.
The biplane pretty much eliminates any ability to remove or fold the wings conveniently. In a plane designed for economy, hangarage costs (and availability) will be an important factor.

The ease with which the SD-1 can be disassembled and slipped into a trailer is very impressive.

While it is commonly noted that few people actually remove/fold the wing of planes that have this capability, from a marketing/acceptance standpoint the import thing is that a prospective builder often >believes < he will.
Last edited: Feb 6, 2020
L

Speaking of vibe, anything hinting at Star Wars would probably only seem somehow cutting edge to Gen Xers. Star Wars is probably old hat to anyone younger. This is all irrelevant, of course, if you don't have excess performance to give away in the service of coolness.

If only we could make a slower and less critical version of the Facet Opal.

Could be a simple build, light for wing area, very slippery, cooler than a dozen star fighters and fast for its power, with great range.

Like you said, folding wings are more often talked about than actually used.

I could see leaving a Catto-style biplane wing structure intact and simply unbolting (or hinging and folding sideways) the forward fuselage. If the canard were controlled with a pushrod and the nosewheel free to swivel, you’d only have to disconnect/connect one control and remove/replace 2-4 bolts or pins.

I’m not kidding. If nothing else it would be an easy way to transport the plane when you don’t want to or can’t fly it.

I’m not completely serious about the Star Wars bit, but I think the associations would come naturally. One nice thing about the diverging X-wing layout is that it would minimize biplane interference.

Two 24’ span wings with 3’ chord each plus an 8’ x 3’ canard would give you a whopping 168 sq ft of area to play with in a relatively compact package.

Has anyone suggested a single engine Cri Cri yet?

There are also several Fe Pischof designs that flew with 25 hp, and if you believe this article, his biplane flew at 60 mph with 4 hp (I don’t believe the 4 hp part).