The C-3 would likely hold up a 1 1/2 sized person. But may require more than 30hp rather than the 26hp to 30hp of the C-2, just saying that it wouldn't require the 36hp to 40hp if it was being flown single place by someone "big boned" but weighing less than two people.. There are some horizontal V-twins over thirty hp that weigh less than the 118lbs of the Aeronca E117 36hp to 40hp.

Heath Parasol seems to hit the parameters about dead on.

Thanks, all. The C-2 is an excellent example of doing well enough on low power. Vigilant1 was absolutely right when he said, "I think Matt is looking for something that will be viewed as more "accessible"/familiar to encourage the 'I can do that' feeling. And an engine that is less than $1500 is quite attractive." I am not saying that a modest industrial engine is the ideal small aircraft engine, just that such an engine with a proven, bolt-on redrive is about as simple as it's going to get.

One thing that I have realized over the years is that the low and slow kinds of aircraft that I like usually are, or have the air of being, very old-fashioned. Even the Volksplanes, which go back to the late 1960s and early 1970s, cry out for steam gauges and flying goggles in a "Those Magnificent Men in Their Flying Machines" way. A design to appeal to younger builders, who have grown up on YouTube DIY videos, Instructables pages, and Makerspaces, so they have skills just not the same skills as the shade tree mechanics, probably shouldn't be retro. It needs to be modern enough that a basic tablet on the panel as your PFD will not look out of place--simple, safe, inexpensive, but not old-school.

pictsidhe suggested not modifying the engine to remove the fan and such, and that probably makes good sense. While it is possible to rig up a cowling that would have an intake near the firewall and outlets near the nose, that's not so simple, which suggests a pusher arrangement in this case. To make it look and feel modern, maybe a tandem wing or canard is the way to go. A Star Wars vibe wouldn't hurt, either. Seriously.

I wasn't kidding about the pusher Mignet idea. For a canard, the Lockspeiser LDA-01 (itself a proof of concept for a larger aircraft) could provide the configuration for what I have in mind. Scale it down so the pilot is seated with his/her back toward the main wing leading edge and his/her feet towards the canard, on a movable seat to adjust the CG for different pilots, and you'd have something exotic-looking but potentially simple and safe.

On 24 hp, I think you need something that's better in slow flight than a canard.

24 maybe not, but there is that 37hp version. But it would be highly dependent on getting that duct/prop just right.

That would appeal to the younger crowd...
V

Flying wires can make for a light structure, but they are probably not going to excite folks raised with a smartphone in their paw.
V

How about a Quickie-esqe concept? Star Wars vibe, we know they can fly on minimal power.
It would need to be easy to build and easy to fly/land (trigear).
K

Vigilant1 said:
Flying wires can make for a light structure, but they are probably not going to excite folks raised with a smartphone in their paw.
Click to expand...

Which is why you build a Stewart Headwind. Although it still has a clunky early Aeronca look.

Vigilant1 said:
How about a Quickie-esqe concept? Star Wars vibe, we know they can fly on minimal power.
It would need to be easy to build and easy to fly/land (trigear).
Click to expand... 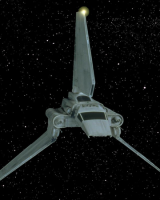 Kinda why I was saying the Rohr might be perfect inspiration

On the wires, I don't think I have ever seen a photo of the LDA-01 with the central fin, so there were fewer wires in real life. The final, full-scale version was to have had only large wingtip fins and rudders, but I rather like the look of the mid-span ones.

On the low-speed handing, it would definitely require some tweaking, perhaps using a high-cambered airfoil for the main wing and accepting the loss in top speed.

Here's some vintage video of my "modern" suggestion. ;-)

A high cambered wing on a canard airplane won't do much good unless the canard is capable of an even higher Cl.
If you had enough dough, you could spend it on fly by wire and relaxed stability requirements, and move the cg back to use all that camber. I suspect that you could buy a VERY nice airplane for that kind of money.
I still think anything that performs well and flies slowly on 24 hp is probably going to resemble a motorglider.

A lightened David cook Shadow ultralight with the said engine.Full cantilever and without the struts.I think the front seat of the shadow is the best for view,It would be a very fast aircraft also.Maybe a tailwheel to reduce weight .

I stand by the Luciole as the primary and premier example of something that is demonstrated to work really well on that exact engine.

Ifyou are limited to anything under 30-35HP... it's either gonna look glider-ish or ultralight-ish.

If you want something that can be used as a multi-purpose airplane, meaning anything more than just floating around at 40 MPH, then you are looking straight down the barrel of the Luciole, SD-1, etc.

Matthew got's to establish the flight mission and performance paramaters he wants to achieve here. Floating around the pattern and softly smelling the grass at dawn from 100 feet... Quicksilver hands down. Turning the $100 hamburger into a $10 hamburger, and keeping it in a garage or trailer... Bon Jour, M. Colomban.
T

The biggest drawback of the Luciole is its very limited payload, around 100kg pilot AND fuel. I would not have enough fuel for a single circuit. This was the deciding factor for me to go with the SD-1.

OK, lr27, I see what you mean. My thought was to use a high-cambered, high-lift airfoil like the Eppler 561 on the main wing. The E561 can reach a CL of about 1.8 at 13 degrees, so the idea would be to make sure the canard stalls out before the main wing hits 7-8 degrees, when the main wing would still be at a very respectable CL of 1.5-1.6 or so. But if the canard used the same chord and airfoil, but at 50% higher wing loading, then it would stall out while the main wing is at just 1.2.

What about using a very high lift airfoil on the canard, something like the Goettingen 523, which has a maximum CL of almost 2.2? That would mean you could get the main wing up to about 1.4 before the canard stalls, and the main wing would still be a long way from its own stall AOA.


lr27 said:
A high cambered wing on a canard airplane won't do much good unless the canard is capable of an even higher Cl.
Click to expand...

Excuse me but doesn't the Mitchel Wing have the possibility of meeting the requirements of a 24 hp single seater.
H

jedi said:
Excuse me but doesn't the Mitchel Wing have the possibility of meeting the requirements of a 24 hp single seater.
Click to expand...

Now that I think of it, the Catto Acro-X layout might work here with a lot more wing area and tricycle landing gear on the fuselage. 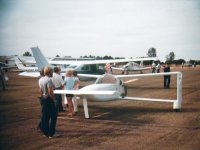